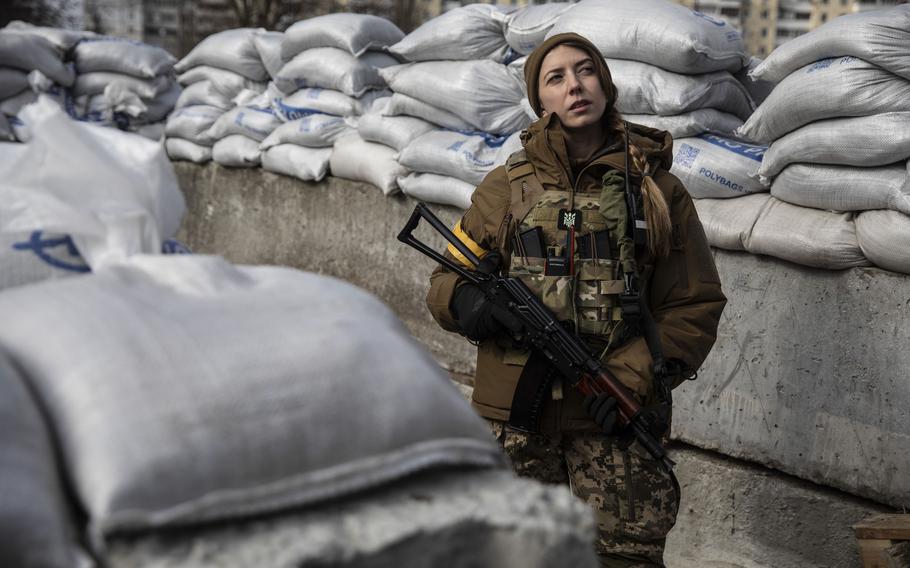 Daria Vasylchenko, a soldier and medic in Ukraine's Territorial Defense Forces, at a sandbagged position in Kyiv, Ukraine, on March 5, 2022. MUST CREDIT: Photo for The Washington Post by Heidi Levine (Heidi Levine)

Although the vast majority of Ukraine’s military is made up of men, some 32,000 women belonged to the country’s armed forces before Russia invaded Ukraine. More have joined the fight since then.

The ban on men between the ages of 18 and 60 leaving the country means that most of the 3 million refugees who have left have been women and children. But many other women have remained behind and, like so many Ukrainians, have been forced by circumstances to join the war effort. These are the stories of four who chose to stay.

Crowds of terrified civilians scrambled under a destroyed bridge, shellshocked, gasping for breath and sobbing. Many had walked for miles. Some carried the elderly on their backs or in their arms. They clutched children, pets and whatever belongings they could manage.

Viktoriia Kramarenko’s job was to help them survive this leg of their perilous journey.

A volunteer medic, she has spent the last three weeks on the front line in Irpin, the city north of Kyiv where a Russian assault killed many people, destroyed homes and cut off phone and Internet service. Her parents are among those still inside.

While on rescue missions, she has come under fire, built a bridge out of rope to ferry urgent supplies and assisted severely traumatized civilians. Each day, her ambulance makes dozens of trips between the bridge and a checkpoint nearby where the rescued rest and regroup.

The horrors of the experience have changed her.

“I realize that I’m ready to tear the enemies’ throats with my teeth,” she said. “Each and every one of us will do that to them. And the land will burn under their feet.”

Kramarenko, 55, a medical assistant who worked at a burn hospital in the capital, began to volunteer as a wartime medic in the country’s east in 2015, using her vacation time to treat wounded soldiers and civilians on the front lines of the military conflict with Russia.

When Russia invaded Ukraine last month, she quickly launched a crash course in battlefield medicine for new members of the Territorial Defense Forces - many of whom joined the fight without any combat experience.

But when Russia ramped up its assault on the outskirts of Kyiv, her work moved to the smashed bridge separating Kyiv from her hometown of Irpin. Fearing a Russian advance on the capital, Ukrainian forces destroyed the bridge to keep enemy troops from crossing. Civilians escaping disastrous conditions in Kyiv began fleeing across the river beneath the remains of the bridge.

Kramarenko has helped ferry many of them safely to the other side.

“I chose a kind of profession that requires service to people,” she said. “I must help them save their lives.”

Daria Filipieva was on vacation. The Ukrainian army combat medic, normally deployed to Luhansk in the east, was spending her time off furnishing her new apartment in Kyiv.

“I made it really cute,” she said. “All these pink, fluffy carpets, kitchen furniture from IKEA, vanity mirrors with lots of lamps, with my new eye shadow palettes from Huda Beauty - and all this started. I am very furious.”

Now she sleeps in the basement of a building in the capital recently converted into a headquarters for troops. The only woman in her group, the men sleep on mats on the floor but let her take the couch.

This wasn’t where the 33-year-old was supposed to be deployed. But when Russia invaded Ukraine on Feb. 24, she got stranded away from her normal brigade, whose phone connection was cut. Urgently wanting to help, she moved from one recruiting office to the next asking where she should go.

“I couldn’t just stay in my house because I’m a soldier, a sergeant, a combat medic, and I need to protect this country,” she said. “So I went through the whole of Kyiv to find how and where I can get a weapon, where I can be important and useful.”

Then she connected with a friend, a commander in the Territorial Defense Forces in Kyiv, who said he urgently needed an experienced combat medic to join his ranks. She got her hands on an assault rifle and joined him, and she started training her new fellow combatants in combat medicine.

“They didn’t even know how to use a tourniquet,” she said in an interview from the building where she is now based. “But now my soldiers know how.”

She first joined the military in 2019 out of a sense of obligation to “do something that will be important for my country that may be tough, may be hard and even may kill me,” she said while on a brief morning break this month. “But I will be useful for people. I won’t just live for myself.”

She graduated at the top of her combat medic course, and her quick reaction time earned her the nickname “Lightning.” The decision to join has paid off, she said.

“I can say that now when lots of people are not prepared for this big war, I’m happy to be completely prepared with all skills, with all knowledge, with all ammunition,” she said, nodding toward her rifle.

After one intense moment in the field, she recalled one male soldier telling her he had been overly excited. “’And you were just so calm, so coldblooded. How did you do this?” he asked her.

She said it was important to her that on the battlefield, she is seen not only as a woman but “a citizen of this country.”

“It’s not about the sex,” she said. “It’s about how strong we are within.”

In a neighborhood in the north of Kyiv, Daria Vasylchenko feels well-prepared to greet any Russians who may break past Ukrainian defenses and try to take the capital.

“We have arranged everything here for a nice welcome,” she said, her hands running up and down the rifle she held across her chest.

Vasylchenko, 29, first learned to shoot as a child. Around ninth grade, she said, boys began studying how to use weapons at school and girls were shuttled into courses on medical aid. She rushed to learn all the medical skills quickly, then joined the boys’ class, where she learned “to assemble and disassemble a machine gun.”

Later, she said, she became well-versed in other weapons, including the Dragunov sniper rifle and the Kalashnikov.

Since the war began, she has been responsible for maintaining security in part of the city’s north - relatively close to Russian troops who have been stalled as they approached the capital. At times, there have been men waiting in line to enlist who question why a woman is working as a soldier.

“They say something like, ‘Lady, why are you doing this when we are here for that?’” she said. “I just smile and say that everyone has their own job and everything will be fine.”

During peacetime, she works in public relations for Kyiv’s Municipal Security Service. She and her husband, who is a commander in the military, are now deployed to different positions in the capital.

“When there’s a chance to go home we try to go home together and talk heart to heart,” she said. “We just talk and talk for hours.”

But this week, a Russian shell or missile struck their apartment building in Kyiv, blowing out windows and disrupting any sense of peace they might find at home. Luckily, they weren’t home at the time of the strike.

“I know that this is just a flat. We can renovate it and so on,” she said. “We continue doing our job in the army. Anything else is not important now.”

Still, having the war hit her own home, she said, “helps me to fight with more passion.”

Several weeks ago, Alona Bushynska, 32, was a professional makeup artist, teaching others the secrets of her trade. Now she carries an assault rifle and sleeps in a building converted for use by the Territorial Defense Forces in Kyiv.

Some skills from her 17 years as a makeup artist have already come in handy.

“I’m not afraid to touch faces, eyes, or wounds. . . . I’m not afraid of blood,” she said. For big concerts and other stressful events, she has to juggle several tasks and work with a lot of people simultaneously. She has a reputation for a diplomatic attitude, so she’s become the de facto peacemaker to settle arguments among volunteers.

“I’m always calm, so that’s why I feel kind of comfortable here,” she said. For now, she sorts medicines, manages food and prepares hot drinks. But she also knows how to use her weapon.

Two of her grandparents were competitive sport shooters, and she has studied how to use four different types of guns.

But if the situation requires it, she added, “I will protect myself.”

Her mother had never held back on disapproval for her choices in life. But when she told her she had signed up as a volunteer on Feb. 24, the day the war started, she was surprised to get her mother’s full endorsement.

“I was like, ‘What? Thank you!’” she said with a laugh. “All my life I was waiting for your support, and only now you’re telling me you believe [in] me? Thank you!”

Throughout Ukrainian history, she said, it’s “always men who protect the country. I think it’s not fair,” she said. “I respect men so much that I came here to bring my energy and my time to protect them somehow.”

The Washington Post’s Heidi Levine, Whitney Shefte and Jon Gerberg in Kyiv contributed to this report.