Putin’s speech at staged patriotic rally is abruptly cut off. The Kremlin claims it was a glitch. 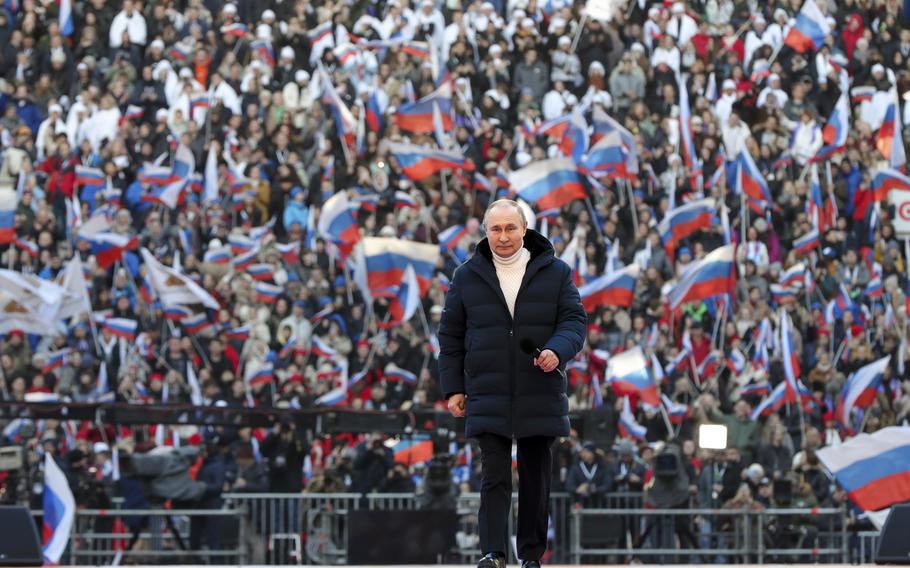 Thousands of flag-waving Russians crammed into Moscow’s Luzhniki Stadium - the same arena that once hosted the FIFA World Cup finals - during a triumphal celebration Friday of the eighth anniversary of Russia’s annexation of Crimea.

The event sharply underscored how much Russia - isolated by Western governments and shunned by global companies - has changed since 2018, when it opened its arms to the global soccer tournament.

Russian President Vladimir Putin, breaking from his recent image as a remote figure at the end of a very long table, strode about the stage, extolling the war against Ukraine as testament to Russia’s “Christian values.”

Wearing a cream polo neck sweater and expensive navy quilted jacket, he said Russia took military action to stop “neo-Nazis and extreme nationalists” in Ukraine committing “genocide.” He has frequently repeated this claim to try to justify the invasion, without sharing evidence.

But the video feed of his speech abruptly cut off mid-sentence, an interruption that was later described by Kremlin spokesman Dmitry Peskov as a technical problem.

Even as Russian forces attacked Kyiv and blockaded civilians in Mariupol, the annual Crimea celebration was part of a massive propaganda effort to unite Russians behind the war and isolate opponents, who are branded traitors and “fifth columnists” by authorities. Other rallies were organized in cities across the country.

“It is to get people out of their misery, out of this genocide, that is the main reason, the motive and purpose of the military operation that we began in Donbas and Ukraine,” Putin said. “And this is where the words from the Scriptures come to my mind: ‘There is no greater love than if someone gives his soul for his friends’ “ - a variation of John 15:13.

He said Russian soldiers were “fighting shoulder to shoulder” supporting and covering one another and upholding Christian values. “We haven’t had such unity for a long time,” he said.

As usual for such events, some of the attendees were state employees ordered to attend.

“We are forced to go to all such events. We can’t say no. It’s out of the question,” said a Moscow social worker, Lena, who declined to give her full name for fear of losing her job. “I hate this whole thing, and I am very afraid. They told us that if we don’t go it’s going to be very strict this time. No explanations will be accepted. We would be fired right away. I have no way out.”

Lena is from the sizable group of Russians unwilling to engage in politics and not interested in the news.

“I am not interested in politics, I don’t understand what’s going on now,” she said.

“I know that people are being killed and it’s awful. And how dare they organize a concert when people are dying?” She said she was also “forced to participate in elections” and to vote for Putin’s United Russia party or lose her job.

A Telegram channel associated with exiled Russian tycoon Mikhail Khodorkovsky, who was jailed for 10 years in 2003 after he emerged as a political rival to Putin, reported that students and employees of state-owned enterprises were ordered to attend. It published screenshots from employers informing staff where buses would pick them up to take them to stadiums or warning them of strict instructions from the general director to attend.

The stadium appeared packed with tens of thousands waving Russian flags and flags with the letter Z, which has been pushed by Russian propagandists as a symbol of support for what Russia calls it “special military operation,” in Ukraine. The crowd listened to nationalist singer Oleg Gazmanov performing a nostalgic song, “Made in the U.S.S.R.,” extolling the Soviet Union’s reach to include countries like the Baltic states, Moldova and Kazakhstan.

Tens of thousands more people were crowded outside the stadium in an event designed to convey a swell of support for the war and Putin.

Cameras zoomed in on young men and women with flags painted on their cheeks, as another singer, Nikolai Rastorguyev - wearing a black hoodie emblazoned with a Z - sang a war song, “Kombat.”

“For Putin. For a world without Nazism,” said Rastorguyev, reputed to be a Putin favorite.

Russian authorities have made strenuous efforts to control information about the war, even banning the use of the terms “war,” “invasion” or “attacks.” Independent media have been shut down, journalists and activists have fled the country, and Facebook and Instagram have been blocked.

The barrage of propaganda on state television justifying the offensive appears to be paying off with state-owned VTsIOM pollster reporting Friday that Putin’s approval ratings was at 79.6%, though the reliability of polling in Russia is difficult to assess. However, respected independent polling agency Lavada Center put Putin’s approval rating at 71% last month.