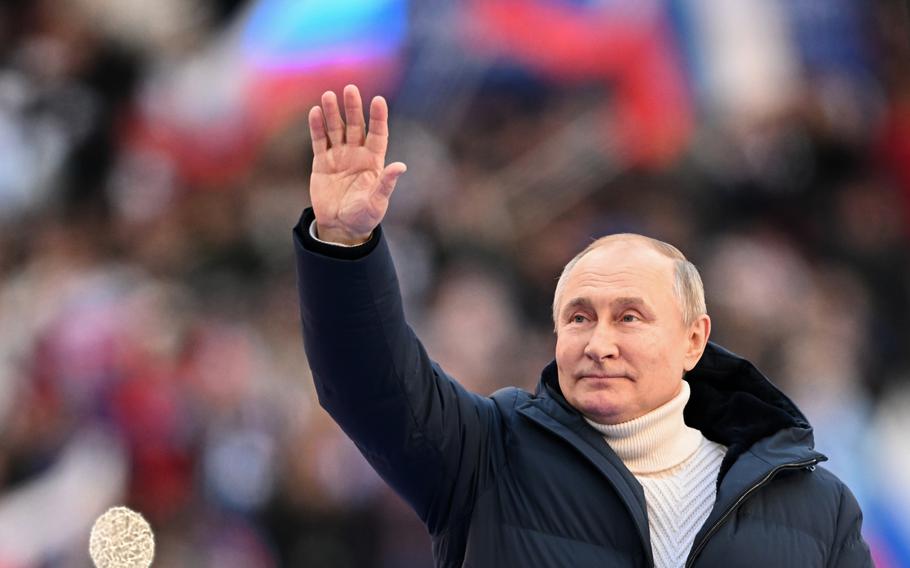 Russian President Vladimir Putin greets people gathered to attend the concert marking the eighth anniversary of the referendum on the state status of Crimea and Sevastopol and its reunification with Russia, in Moscow, Russia, Friday, March 18, 2022. (Ramil Sitdikov/Sputnik Pool Photo via AP)

The operator of hundreds of Burger King locations in Russia has “refused” to close them down, stymying the restaurant operator’s attempts to leave the country.

Restaurant Brands International, the Toronto-based entity behind Burger King, Tim Horton’s, and other fast food chains, owns just 15% of Russia’s Burger King joint venture. The rest is controlled by a group of investors led by Alexander Kolobov, a Russian businessman who is responsible for day-to-day management of the roughly 800 Burger King locations there.

RBI international president David Shear said in a letter to employees Thursday that the company had contacted Kolobov to demand that all Russian Burger Kings cease operations, and Kolobov refused. It has proved difficult to withdraw from the complicated web of business agreements the company established there 10 years ago, he said.

“Would we like to suspend all Burger King operations immediately in Russia? Yes. Are we able to enforce a suspension of operations today? No,” Shear wrote.

“But we want to be transparent with our actions and explain the steps we have taken to stand with the international business community in response to Russia’s attack on Ukraine and its people,” he said.

Burger King’s experience illustrates the difficulty many corporations face when trying to extricate themselves from decades-old investments. Consumers watching the horrific humanitarian toll of Russia’s assault on its neighbor have registered their disapproval of those businesses remaining in Russia, vowing boycotts on social media.

Russian President Vladimir Putin, meanwhile, has vowed to nationalize businesses that try to pull out of the country. And many corporations are stuck there because of complicated legal agreements that put local control of individual stores in the hands of Russians.

In his letter to employees, Shear said his team has been working around-the-clock to “do all the right things” in light of Russia’s attacks on Ukraine, which he called “horrific.”

RBI has suspended all new investments there, and is redirecting any Russian profits to the United Nations’ refugee agency, he said. RBI has also suspended all corporate support for the Russian market, meaning Kolobov’s in-country team could have to reconsider its supply chain and marketing approach.

RBI is also trying to dispose of its ownership stake, but it’s taking time to do so because of the terms of its joint venture agreement. There are no legal clauses that allow any one of the partners to simply walk away and terminate the agreement, Shear wrote.

“No serious investor in any industry in the world would agree to a long-term business relationship with flimsy termination clauses,” Shear said.

He added that any attempt to do so would require the support of Russian authorities on the ground. “We know that will not practically happen any time soon,” he said. “This is also why you may see other brands in Russia with similar structures continue to operate in the market.”