An eclair to go with that artillery fire? Those left in Kyiv try to keep life humming 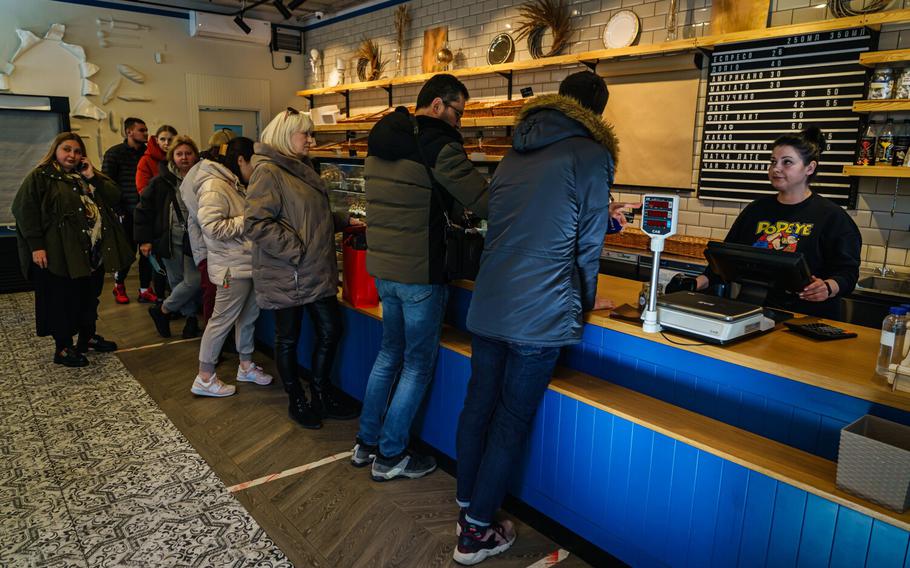 (Tribune News Service) — It's hard to think of a more unlikely combo than war zones and cinnamon buns.

Yet there the buns are in the display cabinet of Khlibar, a high-end bakery and coffee shop (whose name means Bread Bar) in Podil, the hipster neighborhood in the Ukrainian capital, Kyiv. Slathered in cream cheese frosting, they sit on trays laden with poppy seed pastries, cherry rolls, cheese braids and delicately constructed puff pastry cakes with a bouffant of icing.

There's no lack of takers, with dozens of patrons lining up in a chaotic queue outside or sitting on high chairs inside for a sugar-and-caffeine fix despite the drumbeat of Russian artillery and rockets blasting on Kyiv's outskirts.

It's one sign of the new normal here, as the city's remaining residents readjust to a life under conflict.

The two columns of Russian armor thrusting toward the city spurred Kyiv to go on a war footing. Checkpoints with toy-jack-shaped antitank obstacles, concrete slabs and sandbags, manned by jittery soldiers and reservists, sprouted on every major street and boulevard. People lined up in front of supermarkets and pharmacies to stock up on supplies before hurrying home. Most other establishments were shuttered as possibly half of the city's 3 million people fled to safer areas.

But three weeks into the invasion, some of those still here have begun to make a change.

Khilbar closed at the start of the war but opened again three days later, first by offering loaves of bread to help alleviate supply shortages, said Sergei Chernets, 42, an entrepreneur who owns four businesses, including Khlibar.

"We saw a problem. People even got into fights over bread, so there was a need. We opened up, and the lines were around the block," he said.

Still, people were clamoring for something more. "When people came for bread, they kept asking, 'Where are the pastries? We want pastries!'" Chernets said. "So we decided to do that, too."

He already had summoned his three bakers back to work; luckily, the rest of his staff was still in Kyiv, including two pastry chefs. He called them all back in.

"Every day we're getting more customers," Chernets said, adding that up until this week his was the only pastry shop operating in Podil. "Before, it was just customers from Podil. Now we're getting them from the center and the other districts."

For Victor Mozhovi, a cameraman with local public broadcaster Suspilne who was sitting down at a table and demolishing an eclair with a colleague, places such as Khilbar are a marker of what now seems a time long ago.

"I drive in the car, we travel around and I see my office. … I remember work. It's just been a few weeks but it feels like a year," he said.

Mozhovi had volunteered as a military videographer in 2015, covering the war against Russian-backed separatists in eastern Ukraine for a year before returning to civilian life. Now he was back in a war again.

"A lot of people can't understand this transformation. But I lived this in 2015 and already know war is war," he said, running his fork through the eclair, which split open with a soft, cream-filled crunch. "It's important to have this, just to feel I'm still living the life I used to have a few weeks ago." 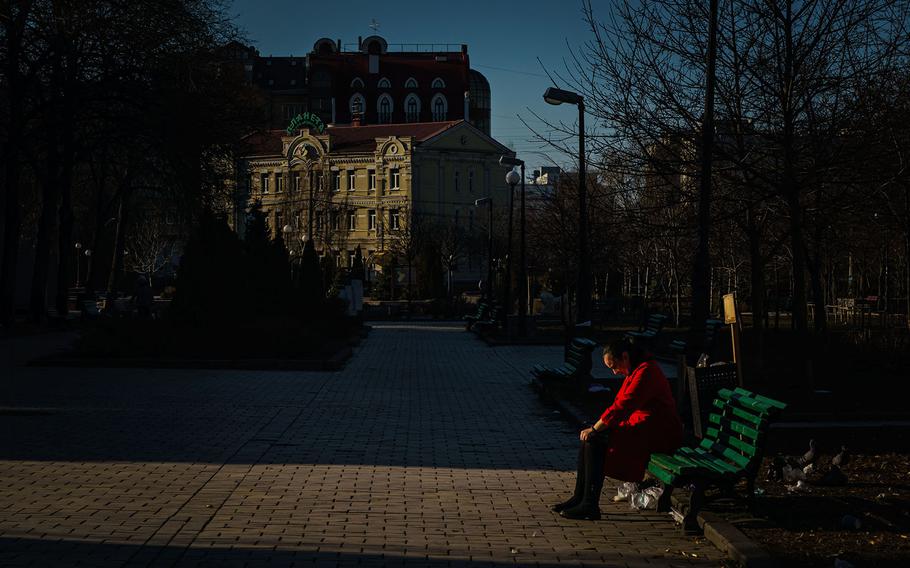 A stroll on a sunny spring day through Podil, a sort of Echo Park-on-the-Dnieper that once was the heart of Kyiv's industrial trade, shows others also trying to recapture a hint of their preinvasion lifestyle.

A few blocks away from Khilbar, Valentina Yermak, 61, sat in a chair in the Koko Nailroom while Theresa Voloshyna trained her discerning eye on a lock of Yermak's hair, her hands a constant whirl around her customer's head.

"I want to feel like a woman. I don't want my looks to go down, and I want to stay elegant," Yermak said. She gestured to Voloshyna. "And Theresa is excellent."

The salon reopened Tuesday after the proprietor, who's now in Bulgaria, got many inquiries for appointments on her Instagram page. Voloshyna, 54, was one of three staff members still in Kyiv — "all the rest have gone to Germany, to Poland, Lviv, everywhere," she said. The building she lives in has 300 units, but only 15 are still occupied.

She initially volunteered with a group preparing medicines and other supplies, but there was less need for her there at the moment, so she decided to go back to work. But that, too, was a form of assistance, she found.

"People are really happy when they see us. They pay for us to come to their house by taxi, and pay us extra. It's relaxing for them to see us," she said, adding that she was getting calls for something as simple as a manicure touch-up.

Voloshyna, a fashionable woman with a blond pixie cut and an air of steely competence, said that although curfew meant the salon couldn't be open for the 12 hours daily as it was before the war, there were still plenty of walk-ins.

"People tell us: 'Because I see you open the salon, we have hope,'" she said, adding that only one appointment was scheduled that day but that seven people had come in so far.

The reopenings are more than just a psychological boost. The war in Ukraine is having a cataclysmic effect on the country's finances: This week, the International Monetary Fund said the Ukrainian economy is set to contract by 10% — and possibly by as much as 35%, if the war drags on for a long time. Though the IMF has announced rapid-financing measures for Ukraine, they can't stop the devastation already wrought on the country's infrastructure, which is thought to be in the $100-billion range.

That prompted President Volodymyr Zelenskyy this week — in between speeches to lawmakers around the world pleading for more military aid — to ease regulations and tax requirements for Ukrainian businesses, scrapping value-added tax and taxes on profit and levying only a single corporate tax of 2% on large companies. For smaller businesses, tax payments would be voluntary, Zelenskyy said.

"That is, if you can — pay. You can't — no questions asked," he said in a video address this week.

Inspections would also be canceled for all businesses "in order to allow everyone to work normally, in order to enable cities to return to life, in order to allow life to continue in all places where there is no fighting," he said, adding that the "economic suppression of Ukraine" was one of Russia's war aims.

"There is only one condition: You must ensure the normal operation of your business within the framework of Ukrainian legislation," Zelenskyy said.

Some entrepreneurs are also reorienting their businesses toward helping the government. Michael Chobanian, a Bitcoin maven who started Kuna, a cryptocurrency exchange, had already transferred much of his staff from the company office in Podil to the Balkan nation of Montenegro ahead of the hostilities. He, too, has left Ukraine but is leveraging his exchange to help the government in Kyiv convert the estimated $100 million in crypto donations received since the war began to U.S. dollars or other currencies.

"We've already managed some of that, and now we're trying to scale up because a lot of donations are coming in through Bitcoin," he said. "My job is to make sure everything is going as fast as possible with minimum commissions and cost."

Zelenskyy's message to reopen has also resonated with Kyivites engaged in more quotidian businesses. That's why Maria Liashenko, a 31-year-old barista ensconced amid the accoutrements of a Buck Coffee Roasters branch in Podil, reopened the store Tuesday.

"I did it for the guests, for the economy. It needs to be supported. Our military needs to get paid," she said.

"This is my country and I will not surrender it."