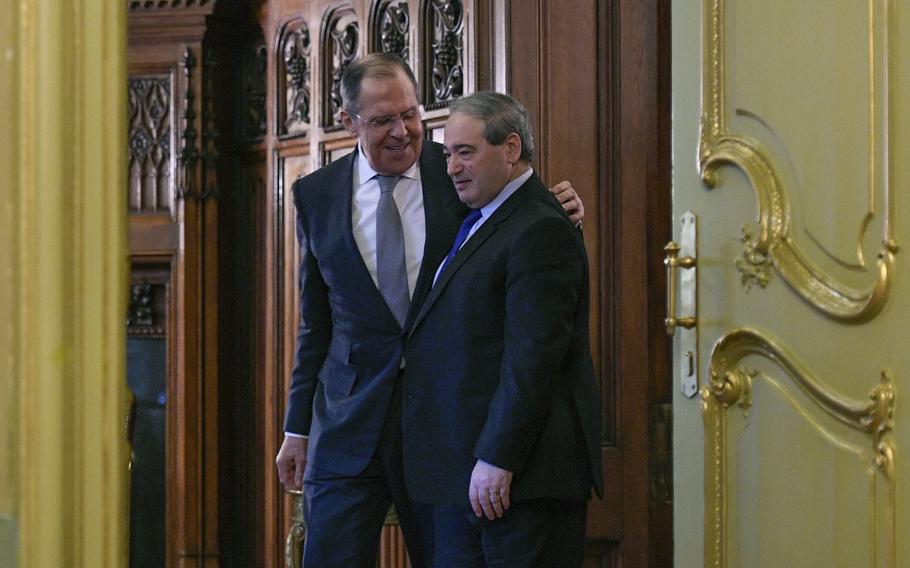 Officials from both Russia and Ukraine expressed cautious optimism Wednesday that peace talks were making progress toward ending almost three weeks of fighting across Ukraine.

Ukrainian President Volodymyr Zelenskyy said in a video address overnight Tuesday that negotiations with Moscow were heading in a “more realistic” direction, and Russian Foreign Minister Sergei Lavrov said Wednesday that there is “hope for reaching a compromise.”

However, both sides also stressed that the talks were difficult, with differences remaining over what neutrality, or security guarantees, for Ukraine would look like.

Lavrov, speaking in an interview with the Russian television channel RBC, said he was basing his assessment on the view of the Russian negotiators. “They state that negotiations are not easy for obvious reasons but nevertheless there is some hope for reaching a compromise,” Lavrov said.

Mykhailo Podolyak, a Zelenskyy adviser and Ukraine’s lead negotiator in the peace talks with Russia, expressed optimism that a cease-fire could happen soon and signaled Ukraine’s openness to a peace deal in an interview with PBS aired Tuesday.

Podolyak said that, in the beginning, Russia was talking in terms of ultimatums, and that its position has “softened significantly” since then. Initially Russia was planning on moving its troops through Ukraine and capture as much territory as possible, blitzkrieg style, he said. But, Podolyak said, that didn’t happen, and Russian troops are stuck fighting in their current positions, with “no chances whatsoever to move further into Ukrainian territory.”

“Therefore, we have much confidence that we will have a cease-fire in the coming days,” he said.

The negotiators are working toward a meeting between Zelenskyy and Putin, where they will sign documents. “Obviously, this is coming sometime soon, because this is the only way to end this war,” Podolyak said.

Meanwhile, in his video address, Zelenskyy said: “The meetings continue, and I am informed that the positions during the negotiations already sound more realistic . . . But time is still needed for the decisions to be in the interests of Ukraine.”

“Everyone should work . . . for negotiations with the Russian Federation,” he said, adding that the eyes of the world were on Ukraine. “It is difficult but important, as any war ends with an agreement.”

The head of the Russian delegation, Vladimir Medinsky, said Ukraine during the talks has proposed a model similar to that of Austria or Sweden, acting as a “neutral demilitarized state but a government with its own army and naval powers.”

“The preservation and development of Ukraine’s neutral status, the demilitarization of Ukraine - a whole range of issues related to the size of the Ukrainian army are being discussed,” Medinsky said, according to Russian state news service RIA Novosti.

Podolyak said that while there have been “words about the Swedish or Austrian model of neutrality . . . Ukraine is now in a state of direct war with the Russian Federation. Therefore, the model can only be Ukrainian and only about legally verified security guarantees.”

Ukraine needs security guarantees that would mean signatories to any deal would have to “actively participate on the side of Ukraine” in any future conflict and provide support and weapons, he said. He also made a plea for a no-fly zone, which has so far been rejected by NATO.

“Ukraine has never been a militaristic state that attacked or planned to attack its neighbors,” he added. “That is why today Ukraine wants to have a powerful pool of allies with clearly defined security guarantees.”

A day earlier, the tone from Moscow was less optimistic, with President Vladimir Putin stating that the talks were at an impasse and a breakthrough was far off. He told a European Council leader Tuesday that Kyiv was “not showing a serious commitment to finding mutually acceptable solutions. “

A crucial point of contention for Russia has been Ukraine’s long-standing desire to join the NATO military alliance, one of the rationales used by Moscow to justify its invasion.

Since Russia’s annexation of Crimea in 2014, Ukraine has made joining NATO a priority. However, on Tuesday, Zelensky suggested a softer stance on NATO membership.

“It is clear that Ukraine is not a member of NATO. We understand this,” Zelensky said during an address to leaders of 10 North Atlantic countries led by Britain, a group known as the Joint Expeditionary Force. “For years we heard about the apparently open door, but have already also heard that we will not enter there, and these are truths and must be acknowledged.”

British Prime Minister Boris Johnson told reporters Wednesday that he had spoken to Zelensky, who understood the “reality of the position” regarding joining the alliance. Johnson said that Britain has ruled out any prospect of Ukraine joining the 30-member group “any time soon.”

“Everybody has always said - and we’ve made it clear to Putin - there’s no way Ukraine is going to join NATO anytime soon,” Johnson said. “But the decision about the future of Ukraine has got to be for the Ukrainian people.”

Meanwhile, NATO defense ministers gathered in Brussels Wednesday to discuss ways of helping Ukraine and deterring Russian aggression without getting drawn into a wider conflict. Over the past two months, the alliance has sent thousands of extra troops to its eastern flank and activated NATO’s Response Force for the first time. Its members have also sent tons of ammunition and weaponry into Ukraine.

Secretary of State Antony Blinken said Tuesday that the United States was working to limit the death and destruction until peace is achieved. The United Nations’ human rights office said Tuesday that since the start of the Russian invasion, it has recorded 691 deaths of civilians overall, of whom at least 48 were children. It has stipulated that the figures are incomplete and the real tolls are probably much higher.

Lavrov, in his lengthy interview Wednesday, also took aim at the United States and said the conflict in Ukraine is “not as much about Ukraine as it is about the legal world order.”

“The U.S. has steamrolled all of Europe,” Lavrov said. “This is an epochal moment in modern history. It reflects the fight for what the world order is going to look like.”

The White House is set to announce $800 million more in security assistance Wednesday, a senior administration official said, as part of a government spending bill that President Joe Biden signed to provide $13.6 billion in new aid to Ukraine. Previous U.S. assistance has included shipments of antiaircraft and anti-armor systems.

The Washington Post’s Hannah Knowles and Maite Fernández Simon contributed to this report.