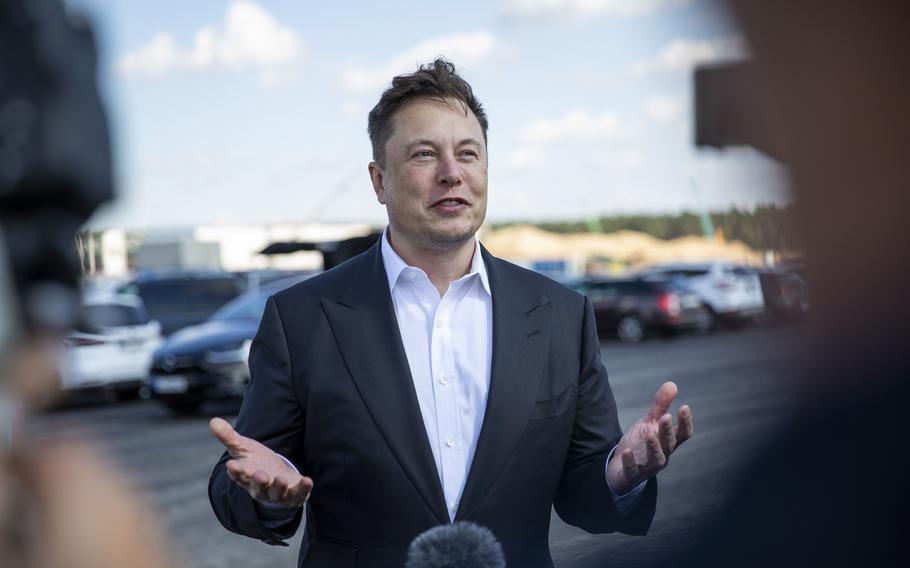 (Tribune News Service) — In a move as rogue-ishly provocative as his moonshot, Elon Musk is inserting himself into the drama of international conflict by bolstering Ukraine’s internet connection to the outside world.

Last Wednesday, his trucks delivered a second shipment of satellite-based Starlink internet terminals to a battered Ukraine, responding to a plea from the nation’s vice prime minister. His initial shipment arrived on Feb. 28, only four days after Russian forces launched an assault on the nation.

His system beams data from space — and so, unlike land-based networks, it is less vulnerable to attack or authoritarian control. Those aspects seem to be angering Russian officials.

“This is the West that we should never trust,” responded Dmitry Rogozin, director-general of Russia’s space agency, on a state television channel translated by Katya Pavlushchenko on Twitter. “When Russia implements its highest national interests on the territory of Ukraine, Elon Musk appears with his Starlink which was previously declared as purely civilian.”

There are other complications too. Using Starlink is potentially dangerous because the Russian military could detect and identify citizens by their satellite communications, warned John Scott-Railton, a senior researcher at Toronto’s The Citizen Lab. “Users’ uplink transmissions become beacons for airstrikes,” he tweeted.

Musk himself took to Twitter to offer Ukrainian tweeters strategic advice, instructing users to “place light camouflage over antenna to avoid visual detection” and “turn on Starlink only when needed and place antenna away (sic) as far away from people as possible.”

Meanwhile, his company blasted another 48 satellites into orbit Wednesday as part of a burgeoning effort to bring high-speed internet to the skies over Europe.

Billionaire Musk, co-founder of companies PayPal, Tesla, SpaceX and others, has never been a typical tech tycoon. While others are cool and detached, he’s a showman. He jumps into the fray with outlandish ideas, proposing to fly tourists around the moon, colonize Mars and deploy a miniature submarine to rescue Thai soccer players trapped in a cave.

If Russia destroys Ukraine’s internet networks or tries to muzzle its digital communication, Musk’s expanding system of satellite-based internet service can help maintain the nation’s link to the outside world, say experts.

In repressive nations, “it’s a game-changer, because you now have a way of bypassing any centralized control over what citizens can receive,” said Herbert Lin, a senior research scholar for cyber policy and security at Stanford University’s Center for International Security and Cooperation. “Government censorship over the internet no longer works.”

“When the cost and size drop, and Starlink is fully deployed, the geopolitical implications are potentially quite profound,” according to Lin.

Starlink’s satellites “are valuable tools for communication by political and resistance leaders and journalists, if they are unable to safely access the internet or it is blocked,” said Larry Press, professor of information systems at California State University.

So far, the nation’s internet, with Starlink as a backup, is largely holding up, according to Emile Aben, a system architect and research coordinator at the Amsterdam-based RIPE NCC.

There are several reasons for its resiliency. There is no dominant player in the nation’s internet market, so the failure of an individual system doesn’t bring down the whole network. Its networks are run by Ukrainian companies, so aren’t government-controlled. Finally, its tech workers have been heroic in their repairs, wrote Aben.

“But there is a break-point for all infrastructure,” he wrote.

Satellite internet technology has long been a promising but overhyped way to deliver service via a network of 2,000 small satellites in the sky. In the U.S., it is a provider of last resort, because it’s expensive and data is more strictly capped.

Musk’s rocket company SpaceX, which is building out Starlink, is a pioneer in the field. Amazon, Boeing, OneWeb, Telesat and other companies may soon create their own.

Starlink’s quick shipments to Ukraine are, in part, serendipitous. Back in January, when Ukraine was still a peaceful nation, the company wanted to include the country in its expanding European market, according to SpaceX COO Gwynne Shotwell in a private March 7 presentation at CalTech reported by SpaceNews.com. Before the war, it had requested rights to lay down capacity in Ukraine, she said.

To speed delivery, several hundred Starlink units were tested, packed and shipped by volunteers with Tesla’s Giga Berlin and Germany Service team, according to a leaked Tesla email. A shipment of Powerwall battery storage units, to help support the terminals, was assembled by Tesla Energy employees in Germany.

“I think the best way to uphold democracies is to make sure we all understand what the truth is,” said Shotwell, according to SpaceNews.com.

Musk has not revealed how many terminals he’s delivered, or where they’re going. His system won’t help Ukrainians share information internally; for that, they still need the local network. But his terminals can talk to each other — and the international community.

Connectivity snapshots show that between seven and 10 Starlink satellites are in service over the cities of Odessa and Lviv and between two to six in the city of Kharkiv, based on a tracking system analysis by CSU’s Press.

If Kyiv is given terminals, it would have 100% “uptime” with connections through as many as nine satellites to ground stations in Turkey, Poland and Lithuania, said Press.

In the bloodied city of Mariupol, under siege and without water, gas or electricity, the internet has been down since March 2.

In response to the crisis, the company did a software update that reduces the terminals’ need for power — so if electricity is cut off, they can be powered by a car’s cigarette lighter.

It also enabled a roaming feature so a terminal can be used in a moving vehicle, making it easier to evade detection. Some Starlink terminals near conflict areas have been jammed for several hours at a time, tweeted Musk, but a software update created a bypass.

“What we’re seeing with Elon Musk and the Starlink capabilities is really showing us what a megaconstellation or a proliferated architecture can provide in terms of redundancy and capability,” Gen. James Dickinson, commander of U.S. Space Command, told committee members.

If Russians take over Ukraine’s network, the country could lose access to the wider web. But Russian control would take time, said Lin. Any new Russian-installed Ukrainian regime would likely, at least initially, be technically incompetent.

“But all internet access is going to be severely curtailed,” Lin said. “You’re going to have other ways of doing it. Musk’s terminals give you a way.”