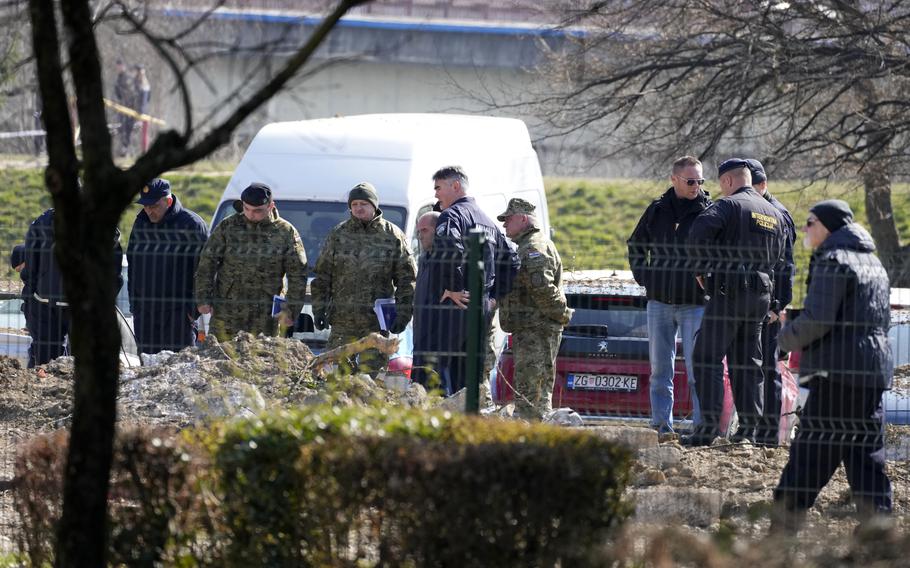 Police inspect site of a drone crash in Zagreb, Croatia, Friday, March 11, 2022. A drone that apparently flew all the way from the Ukrainian war zone crashed overnight on the outskirts of the Croatian capital, Zagreb, triggering a loud blast but causing no injuries, Croatian authorities said Friday. (Darko Bandic/AP)

A six-ton unmanned reconnaissance drone that streaked across eastern Europe from war-ravaged Ukraine and crashed in the Croatian capital last week has raised awkward questions about NATO’s readiness to protect European airspace.

Startled authorities are asking how none of the three North Atlantic Treaty Organization member states — Romania, Hungary and Croatia — reacted as the Soviet-era Tu-141 traversed their respective airspaces at as much as 435 mph on March 10. Officials point to a lack of coordination between the three governments and with NATO.

“This was a clear and immediate threat to which we should have reacted,” Croatia’s prime minister, Andrej Plenkovic, said on Saturday at the crash site in Zagreb, a park next to a student dormitory where it gouged a 10-foot-wide crater. “We will raise this issue at all levels, since this is an incident that mustn’t be repeated — ever.”

Croatian authorities say the unarmed drone, which was used from the 1970s by the Red Army as well as the post-Soviet Ukrainian military, was launched from Ukrainian territory, though the exact circumstances and its origin are not known. Plenkovic said it is unclear whether the flight was “error or sabotage.”

Investigators in Zagreb are now working with NATO and counterparts in the Ukrainian government on the circumstances of the craft’s launch as well as on traces of explosives reported in an initial finding by the Defense Ministry in Zagreb. It wasn’t immediately clear whether the remnants were part of a self-destruct mechanism with which similar vessels are outfitted.

Nobody was injured in the crash. The 14-meter-long vehicle, whose parachute was partly activated during the fall, damaged several cars. It had flown at an altitude of 4,264 feet, crossing briefly over Romania. The drone then spent 40 minutes aloft over Hungary and seven minutes in Croatian airspace before going down.

The security breach has prompted a round of finger-pointing amid already frayed nerves in the region as Russian President Vladimir Putin’s military advances into Ukraine. Plenkovic said his government wasn’t notified by either neighboring allies or by NATO, while Hungarian Prime Minister Viktor Orban found out from Plenkovic, the government in Zagreb said.

Air defense systems between the three NATO states were unable to translate intermittent radar blips into a unified flight path, according to a NATO official who declined to be identified as the investigation continues. Omissions can happen — and will help improve air defense in the future, the official said.

A spokesperson for NATO did not immediately respond to a request for comment.

“Why nobody reacted — that’s an excellent question,” Ivan Selak, a retired Croatian lieutenant colonel who flew MiG-21 jets for 35 years, said in a phone interview in Zagreb. An integrated defense system needs to be in place to shield NATO countries, he said. “Even without a NATO warning, in a case as this one, a country should react and scramble its fighter jets.”

The drone was flying too fast and at low altitude during its brief trip over Romania, officials there said. Those factors “didn’t allow for additional measures to be taken to identify the aircraft mid-fight,” the Defense Ministry in Bucharest said.

Hungary was more at pains to explain the incident after the drone traversed nearly the length of the country. Orban, an erstwhile Putin defender up for reelection next month, has announced a policy of “strategic calmness” on Ukraine, prohibiting the shipment of lethal arms to the country.

“Hungary’s aim is to stay out of this war and avoid it, even if events like this occur with a provocative intent,” the Hungarian Defense Ministry said in a statement to the national news agency MTI. “It is important to handle this in a prudent and calm manner,” it said.

NATO Secretary General Jens Stoltenberg on Friday said in a tweet that the organization will work closely with Croatian authorities to establish the facts.

The drone crash deep within NATO’s frontiers has only compounded war jitters. Hungarian jets were scrambled twice on Friday, though fighters near the Ukrainian border didn’t intercept anything.

On Sunday, a small unmanned aircraft, likely an outdate Soviet-made Orlan-10 vehicle, crashed near a house in Romania some 160 kilometers from the Ukrainian border. Romanian Defense Minister Vasile Dincu, speaking in a phone interview, said an investigation is underway, though “not big enough to be considered by NATO a security incident.”