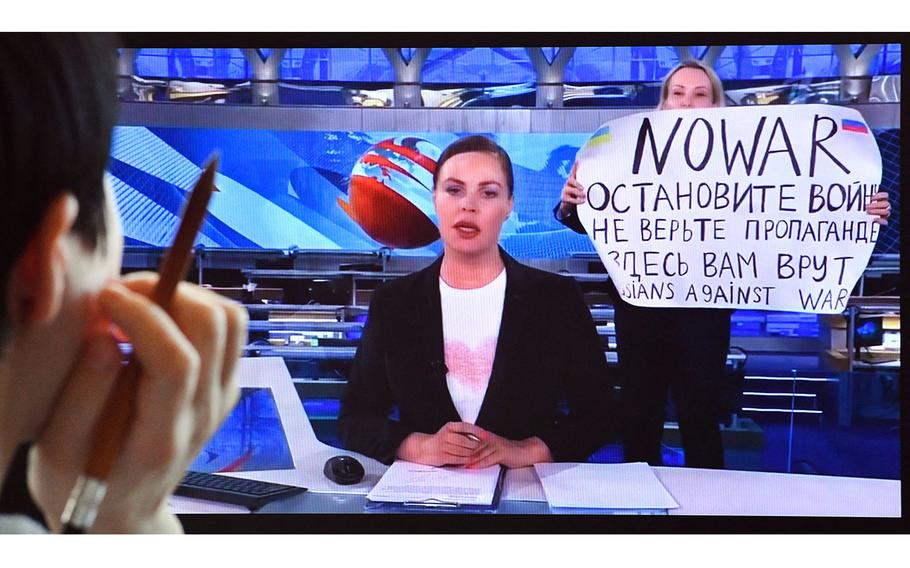 A woman looks at a computer screen watching a dissenting Russian Channel 1 employee entering Ostankino on-air TV studio during Russia’s most-watched evening news broadcast, holding up a poster which reads as “No War” and condemning Moscow’s military action in Ukraine in Moscow. (AFP via Getty Images/TNS)

(Tribune News Service) — A news broadcast on Russian state television that was crashed by an anti-war protester has become a symbol of Moscow’s determination to control the domestic narrative on its invasion of Ukraine and of the risks some Russians are taking to voice their opposition.

During a live segment Monday on “Vremya,” one of the most-watched Russian news shows, journalist Marina Ovsyannikova could be seen walking up behind a seated anchor and holding up a white poster with the words “No war” in English. Below, in Russian, were the phrases “Stop the war, don’t believe the propaganda, they are lying to you here.”

The program, which airs on state-controlled Channel 1, quickly cut away to another shot, silencing Ovsyannikova’s protest in a country where journalists must follow the state line on the Ukraine war or risk imprisonment.

President Vladimir Putin’s government has declared its attack on Ukraine to be a freedom-fighting “special military operation” to root out the “neo-Nazis” who it says control the Ukrainian government. Journalists were banned this month from describing Russia’s attacks on Ukraine as a “war.” Many international news organizations have pulled their reporters out of Russia as a result.

Ovsyannikova, an editor at the station, was arrested and identified by OVD-Info, an independent human rights group. In a video posted online before her protest, she described being “ashamed” for her role in spreading Russian propaganda.

“What is going on now is a crime,” she said. “ Russia is an aggressor country and Vladimir Putin is solely responsible for that aggression.”

Ovsyannikova, whose father is Ukrainian, called on Russians to “stop the madness” and oppose the war. Since the invasion began Feb. 24, thousands of people across the country have been arrested for participating in protests against the war.

“Don’t be afraid of anything, they can’t imprison all of us,” Ovsyannikova said.

On Tuesday, lawyers representing Ovsyannikova said she was charged with holding an unauthorized public event.

The punishment could include up to 10 days in jail.