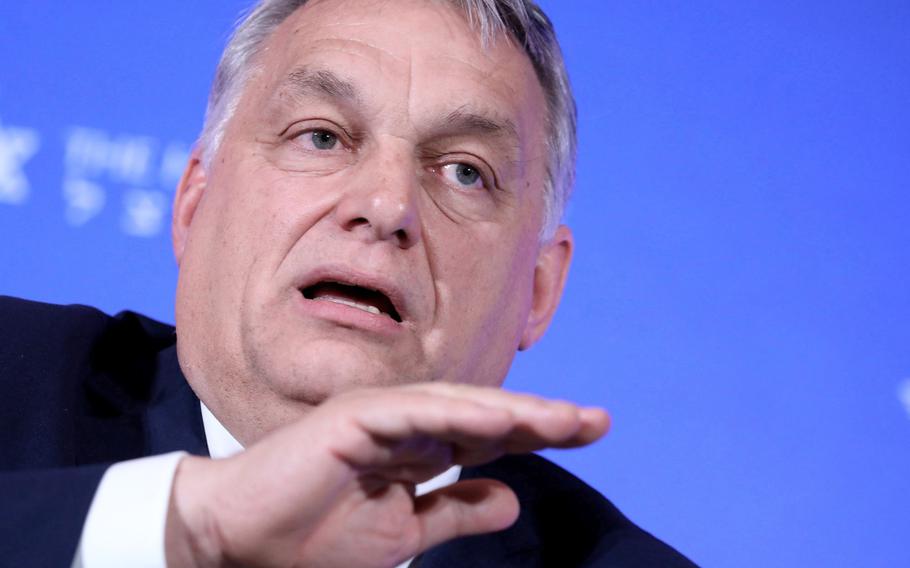 Hungarian Prime Minister Viktor Orban rallied his supporters behind a message of peace and security as he tried to lock in gains in opinion polls less than three weeks before an election.

Tuesday’s national holiday in Hungary saw the biggest events of the campaign, with Orban addressing a crowd outside Parliament in Budapest and his opponents hosting a rival demonstration in another part of the city. What wasn’t expected just a few week ago, though, was that a war in Ukraine would turn out to be the key issue.

Until Russia’s invasion last month, Orban was the European Union leader with the closest relations with President Vladimir Putin and the election was shaping up to be the most closely contested since Orban’s return to power in 2010. Polling suggests Hungarians are now more likely to stick with Orban while fighting rages in their eastern neighbor.

“This is no time for mistakes, for scrambling, no time for even a single bad decision,” Orban warned tens of thousand of his supporters gathered outside Parliament, adding that the war in Ukraine had raised the stakes in the ballot. “I can’t remember when the stars were so aligned in our favor 19 days before an election.”

The four-term premier’s Fidesz party has opened a double-digit lead against a six-party opposition alliance in one poll taken days before and after Russia’s Feb. 24 invasion. Asked which candidate would be the “stronger leader to guarantee Hungary’s security during the Russia-Ukraine conflict,” 66% picked Orban compared with 25% for the opposition alliance’s leader, Peter Marki-Zay, according to a poll published on March 9 by Szazadveg, which advises the government.

“The war has completely dominated the campaign, which means there’s no time or energy for any other topic,” said Gergely Rajnai, a political analyst at the Centre for Fair Political Analysis in Budapest. “This is difficult for the government, but especially for the opposition because it has no space to lay out its vision.”

Orban shifted his pro-Russia, anti-immigrant policy to endorse EU sanctions against Moscow and welcome more than 200,000 refugees from Ukraine, many of them ethnic Hungarians. The EU’s longest-serving head of government is now touting himself to anxious voters as the leader who can stop the war spilling into Hungary.

Marki-Zay said Orban was responsible for fraying relations with Western allies after a decade of power consolidation that triggered an EU probe over the erosion of the rule of law.

“There has never been an easier choice,” Marki-Zay told opposition supporters at a rally. “We choose Europe over the East.”

He pushed back against polling data, saying that as mayor of a formerly ruling-party stronghold he had “never come out on top of a poll but has won every election” he ever took part in.

Opposition parties have also tried to pick apart Orban’s message of being a guarantor of Hungary’s security after the government misread the threat Russia posed and did a U-turn on the deployment of NATO troops in Hungary. Most recently, Hungary let a Soviet-era military drone fly through its airspace for 40 minutes and into NATO ally Croatia before it crashed.

While Orban appears to have the momentum, the political and economic fallout from the war still make the election too close to call, according to Gabor Toka, an election expert and senior fellow at Central European University in Budapest.

“Voters have already been extremely anxious because of the pandemic and then inflation came and now a war and refugees,” Toka said. “This is a risky situation for both Orban and the opposition.”