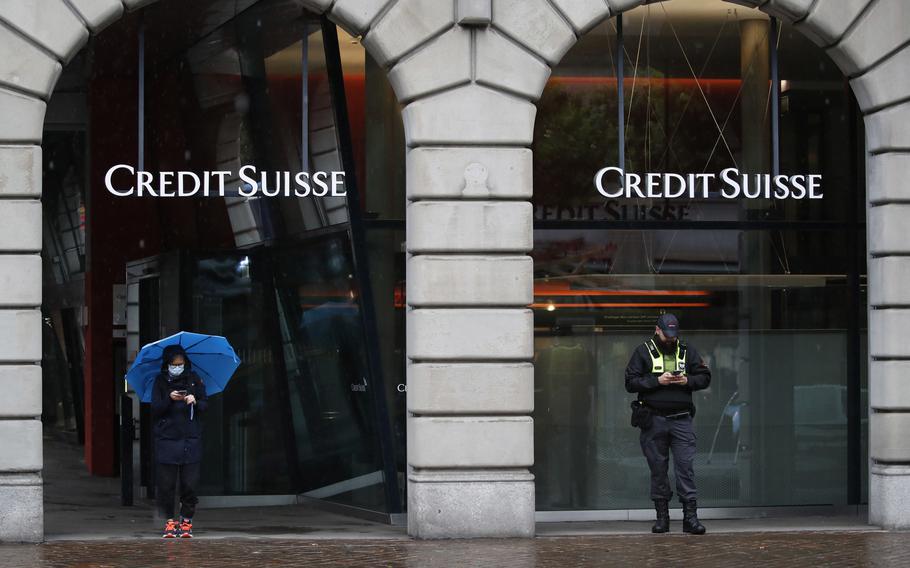 A police officer outside a Credit Suisse Group bank branch in Zurich on July 13, 2021. (Stefan Wermuth/Bloomberg)

Credit Suisse Group Chief Executive Officer Thomas Gottstein signaled that the bank will review its wealth management business in Russia and eastern Europe, as peers including UniCredit consider their future in the region after the invasion of Ukraine.

“We are going to exit sub-Saharan Africa and together with Francesco de Ferrari, our new CEO for wealth management, we are looking at some other wealth management markets in emerging markets,” Gottstein said at a Morgan Stanley conference on Tuesday. “We’ll obviously also now have to look at Russia and Eastern Europe.” He said the bank hasn’t yet taken any decisions.

Credit Suisse Group said last week that it had 848 million francs ($904 million) of credit exposure to Russia at the end of last year, including derivatives and financing at the investment bank and lombard and other loans within the private banking business. About 4% of the assets run by the Swiss bank’s wealth management arm were with Russian clients, either in the country or nationals living abroad, Gottstein said.

A rising number of European banks are exiting Russia or weighing their future there after the war in Ukraine triggered a humanitarian crisis and huge sanctions for the country’s business elite and economy. Andrea Orcel, chief executive officer of UniCredit, said earlier in the day at the same conference that the bank is also considering its presence in Russia.

“We are now reviewing the situation, it’s a very serious situation,” Gottstein said. “We will have to see now over the next few months what this all means for our operation in Russia. I have not taken any decisions on that,” he said, adding that the bank has “a very well managed risk management around the situation.”

The bank’s Moscow office has approximately 125 employees working across wealth management and the investment bank. The firm said last week it has “planned for a number of potential scenarios,” without giving more details. Net assets held in the bank’s Russian operations were 195 million francs as of Dec. 31.

Wealthy Russians with links to President Vladimir Putin have seen their assets frozen across the world, while other rich bank clients who borrowed against Russian assets have to come up with more collateral after those securities plunged in value. Bloomberg reported previously that UBS Group and Credit Suisse are both triggering margin calls on some customers who use Russian bonds as collateral, after marking down the value of debt issued by the country and its corporations.