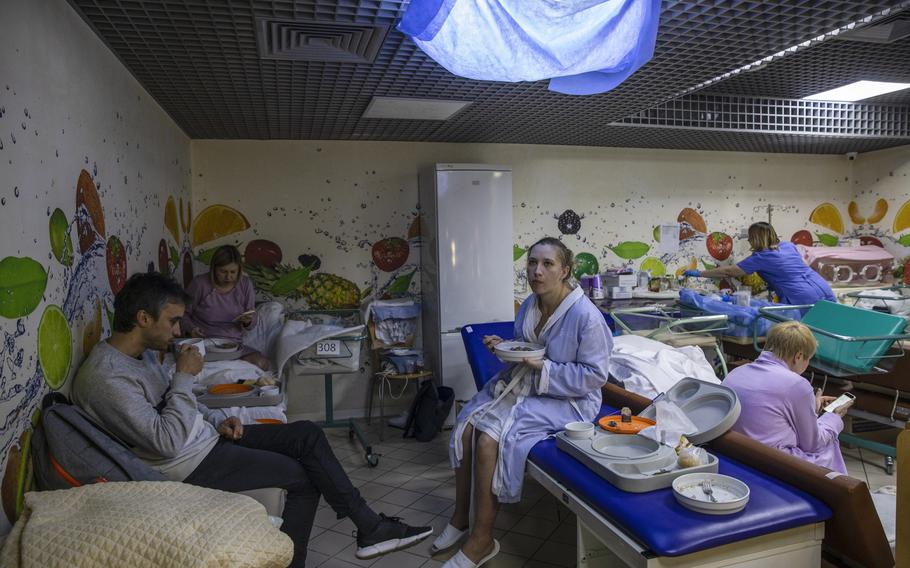 Expectant mothers are cared for in a makeshift underground maternity ward of the Isida clinic in Kyiv on March 2. In normal times, the room is a cafeteria (Heidi Levine/For The Washington Post)

Windows blasted out, a car in flames, patients limping away to safety — this was the scene at a maternity hospital in Mariupol, a port city on the Sea of Azov, after a Russian strike tore through the facility, killing at least three people and injuring 17 on March 9, according to Mariupol officials.

The maternity hospital was one of many health care facilities hit amid Russia's siege on key Ukrainian cities since the nation's invasion in late February, a new Washington Post analysis reveals.

To confirm which hospitals have been damaged, The Washington Post examined more than 500 videos and photos, reviewed social media posts from the hospitals, spoke to witnesses and hospital employees, and compared key details from these incidents to reports from Ukrainian officials, the United Nations, the World Health Organization, Human Rights Watch, the Center for Information Resilience and ACLED, a group that monitors armed conflict around the world.

The Post's visual analysis verified nine incidents, including the strike in Mariupol, where hospitals faced direct damage as a result of a reported Russian attack. There were fatalities in at least three of the incidents verified by The Post, according to officials. Three of the facilities specifically served women or children.

"Hospitals and medical facilities are protected by international humanitarian law," a spokesman for the International Committee of the Red Cross, Jason Straziuso, said in an email.

Medical facilities are considered "protected objects" under the law unless they are used for military purposes, said Priyanka Motaparthy, director of the Counterterrorism, Armed Conflict and Human Rights Project at Columbia University Law School's Human Rights Institute. "When you are hitting in the hospital, you're not only risking killing people who are receiving medical care, who are sick and wounded, but also because of the long-term effects on a civilian population," she said. Motaparthy added that the opposing party must give warning before it attacks.

International law experts who reviewed The Post's findings said they appear to show evidence that Russian forces have violated these laws. In at least one case, a pro-Russian media outlet has claimed that a hospital damaged in Ukraine was used for military purposes. The Post found no evidence to support this claim. Motaparthy said an investigation into the incidents should consider any statement the Russian military gave for why it struck the hospital, but hospitals are presumed to be civilian.

In one of the deadliest incidents The Post reviewed, Russian forces fired a ballistic missile carrying a cluster munition, which hit the Central City Hospital in Vuhledar, a town in the separatist Donetsk region on Feb. 24, according to visuals obtained and analyzed in a report by Human Rights Watch. The munition hit just outside the hospital, killing four and injuring 10 civilians, six of whom were health care workers. Human Rights Watch confirmed the events by speaking to a doctor and official from the hospital and verifying photos posted to social media and sent directly by hospital staff. The Post confirmed the geolocation of the photo of damage to the hospital by comparing it to available source imagery on Google Earth, and the incident was also reported by ACLED. The World Health Organization, which has not released the locations of the 24 attacks it has confirmed, listed a single strike on Feb. 24 with the same number of casualties.

Cluster munitions are "inherently indiscriminate weapons," Motaparthy noted. She explained they often malfunction, leaving behind bomblets that can explode months or years after an attack. They also disperse over a wide area, making them extremely dangerous in populated areas. The U.N. human rights office has found "credible reports" that Russian forces have used cluster munitions several times since the war began, and that these attacks "may amount to war crimes."

In addition to the events in Vuhledar and Mariupol, three people died after a strike on an intensive care hospital in Vasylivka, according to officials.

A medical campus in the southeastern city of Vasylivka was struck by Russian rockets on March 1, killing three people and injuring four, the Official channel of the Zaporizhzhia Regional Military Administration reported on Telegram. The Post geolocated video showing damaged buildings on the compound by comparing it to source imagery on Google Earth. 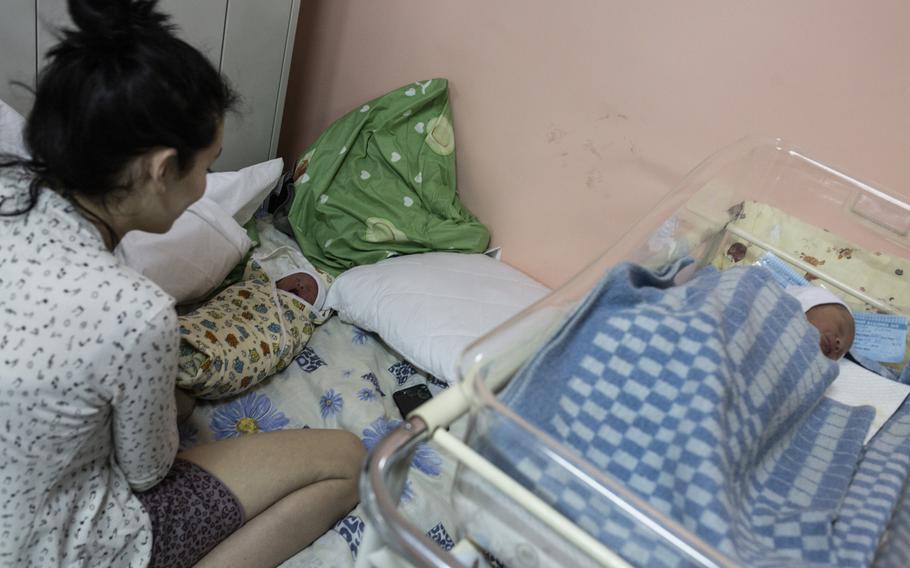 Sasha with her newborn twins in an underground maternity shelter at the Kyiv Maternity Hospital No. 5 on March 3. (Heidi Levine/For The Washington Post)

At least a third of the incidents verified by The Post included centers that treated women or children. The attack in Mariupol hit a maternity ward and another damaged a pediatric dental clinic in Chernihiv.

In the northern city of Chernihiv on Feb. 27, visual evidence shows impact to a central courtyard, near a pediatric dental clinic, which The Post confirmed via imagery on Google Earth. The attack left a crater in the ground, uprooted trees and blew the windows and debris from the surrounding buildings. The facility posted video of the aftermath to Facebook, showing blasted-out windows and debris scattered throughout the building.

Russian airstrikes hit homes and a hospital, including a maternity ward, in the northwest city of Zhytomyr on March 1, according to the Zhytomyr City Council, which shared video, first verified by third-party verification service Storyful and corroborated by The Post, showing first responders at the nighttime scene amid destroyed buildings and debris. Four people died in the attacks on the homes. Only windows were damaged at the maternity ward, according to regional council chairman Vladimir Fedorenko.

In all of the examples reviewed by The Post, the hospitals' buildings were damaged. Verified images and videos illustrated the varied extent of the destruction.

On Feb. 25, an oncology hospital in the southeastern city of Melitopol came under fire. Video, verified by Storyful and The Post, shows an explosion at the facility. Government officials and ACLED also confirmed the event. In the video, there is loud shelling, followed by a large boom and a bright flash emanating from inside one of the top floors of the hospital. Ukraine's Minister of Healthcare Viktor Liashko said an operating room was damaged, but no patients were hurt in the attack.

On Feb. 27, Russian shelled the ear, nose and throat department building of a hospital in Volnovakha, a small city in the separatist Donetsk region, according to a Parliament of Ukraine Telegram channel. The Post verified photos posted online that showed damage to the outside of the building by comparing to source imagery on Google Earth.

The deputy mayor of Izyum, a city south of Kharkiv, said the admissions office of a hospital was hit on March 8. Volodymyr Matsokin posted video to Facebook later that day showing part of the building destroyed, exposing part of the roof's internal structure with the facade caved inward and debris littering the area. "Patients climbed out from under the rubble as they could," he wrote on Facebook.

Late in the evening of March 11, the head doctor of a cancer hospital in Mykolaiv posted photos and video, verified by The Post, of smashed windows and debris from an alleged Russian attack. He said many patients were being treated in the hospital at the time it came under attack, but no one was killed. The Mykolaiv regional governor, Vitaliy Kim, wrote on his Telegram channel that a Russian attack hit the hospital.

"Assuming Russia does not take necessary steps - and it seems highly unlikely that it will — this evidence will be relevant to the International Criminal Court Prosecutor's investigation of war crimes and crimes against humanity in Ukraine," Oona Hathaway, a professor of international law at Yale Law School, said in an email to The Post.

The evidence gathered by The Post is "powerful circumstantial evidence" that would require a more detailed investigation, Hathaway explained.

Motaparthy too noted in some cases it is difficult to parse from the visual imagery alone exactly what happened. "What is the extent of the damage? Were they targeting a military object next door or nearby, or were they targeting the hospital itself?" However, she noted that "attacks where there's clearly extensive damages and civilians were killed appear to violate the laws of war, and that militaries should avoid damaging hospitals, even if targeting military targets nearby."