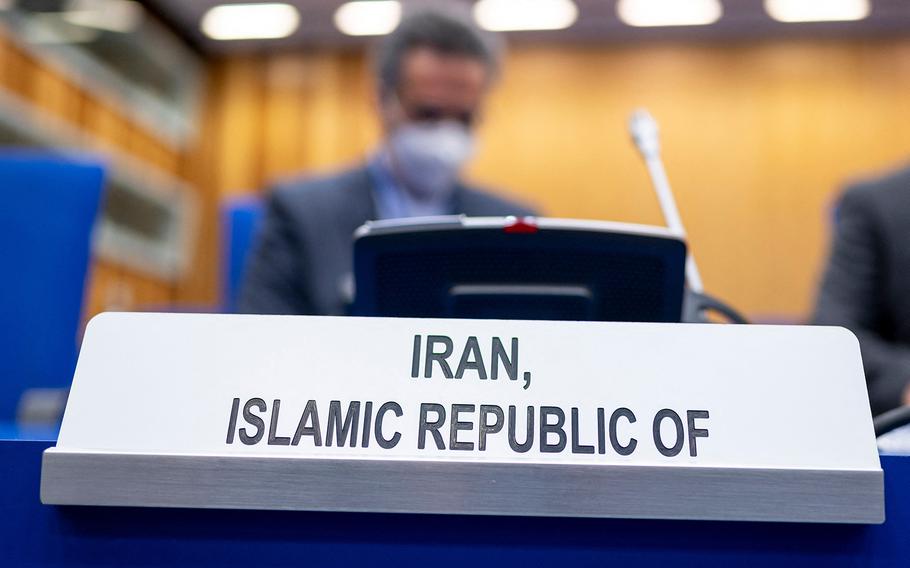 Iran's political attache at the permanent mission to the Vienna-based international organizations Khodayar Rouzbahani is seen prior to the start of the quaterly Board of Governors meeting at the IAEA headquarters in Vienna, on March 7, 2022. (Joe Klamar, AFP via Getty Images/TNS)

(Tribune News Service) — World powers and Iran suspended their efforts to revive the 2015 nuclear accord, reigniting a crisis that’s set to roil already surging oil markets and potentially plunge the energy-exporting Persian Gulf into a new cycle of violence.

A pause in the Vienna talks was required due to “external factors,” European Union foreign policy chief Josep Borrell said on Twitter, without elaborating. Borrell said the sides had come very close to agreement but didn’t say when — or if — the negotiations would be able to resume.

The rupture follows escalating tensions between the Kremlin and the White House. Russia warned on Saturday that it wanted U.S. guarantees that sanctions imposed over its invasion of Ukraine wouldn’t affect its planned partnership with Iran.

Oil prices briefly extended gains on the break in negotiations as traders discarded cautious expectations that the U.S. would eventually lift its sanctions on Iran’s economy and ease an effective blockade on the OPEC member’s oil exports.

U.S. and European officials had warned for weeks that the window for a deal was closing, urging an agreement on a handful of outstanding issues.

Iran’s Foreign Ministry spokesman Saeed Khatibzadeh said the pause wasn’t necessarily the end of the road, and could provide momentum to resolve the outstanding issues.

The U.S. and its European and regional allies must now decide how they respond if Iran continues to advance a nuclear program that has already enriched uranium to just below the level needed for atomic weapons.

Absent the deal, Iran’s nuclear work has been racing ahead, with its engineers threatening to make the original accord obsolete because of their new advances.

The 2015 nuclear deal unraveled after then-U.S. President Donald Trump reimposed sanctions almost four years ago. Iran responded by escalating its uranium enrichment way beyond limits set by the accord. The standoff fueled conflicts in the Middle East and a series of attacks on shipping in waterways key for global trade.

After Vladimir Putin ordered his forces into Ukraine, fresh barriers to resurrecting the accord arose.

“Undoubtedly the war in Ukraine has made it more difficult to get an agreement,” said Irish Foreign Minister Simon Coveney, who helped facilitate the talks, this week. Diplomats had “been trying to push for a deal before Russia’s war in Ukraine happened because we knew that it would create a lot of complexity.”

Russia weighed in with its new condition just hours after the head of the world’s nuclear watchdog announced from Tehran that one of the last major hurdles to a deal had been cleared. Up until that moment, diplomats had said on and off the record that a deal could be announced within days.

In Vienna, Moscow’s envoy to the talks sought to spread the blame for Friday’s suspension. “The conclusion does not depend on Russia only,” Mikhail Ulyanov said at a briefing. “There are others that need to settle their issues among themselves.”

As expectations of a breakthrough diminished this week, both the U.S. and Iran said lingering disagreements over the scope and timing of sanctions relief looked difficult to overcome. Sticking points have also included Iran’s demand that the U.S. guarantee it would never again leave the pact.

Regardless of Moscow’s stance, EU officials said a deal to salvage the accord could still have been reached if Tehran and Washington had been able to compromise.

While Iran’s economy has remained surprisingly resilient to U.S. sanctions — even as it was struck down by the worst coronavirus outbreak in the Middle East — unrest and protests have become increasingly frequent and the country’s clerical leadership will be wary of fresh outbreaks of dissent in response to the deal’s collapse.

Enrique Mora, the European Union envoy charged with coordinating the talks, said that diplomats were pausing in order to “maintain a good spirit.”

“It’s better to pause and I will be working obviously with all delegations to overcome this situation, the sooner the better, and come back and end our negotiations successfully,” he told reporters outside the Palais Coburg hotel where the talks have been taking place in Vienna.