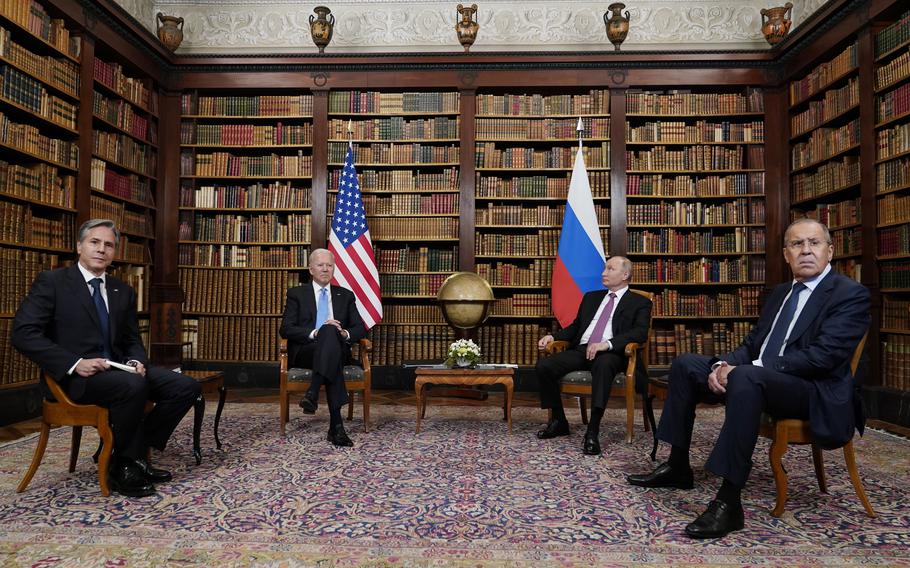 Off-the-cuff remarks made by a Russian air-safety official, quickly disavowed by the nation’s industry watchdog, have added to the uncertainty over the fate of some $10 billion in foreign-owned aircraft being held in the country. (Patrick Semansky/AP)

Off-the-cuff remarks made by a Russian air-safety official, quickly disavowed by the nation’s industry watchdog, have added to the uncertainty over the fate of some $10 billion in foreign-owned aircraft being held in the country.

Valery Kudinov, who heads airworthiness maintenance at Russia’s Federal Air Transport Agency, spoke to reporters on Thursday at a trade conference in Moscow, outlining what appeared to be a plan taking shape for the country’s aviation sector to continue flying after Russia was sanctioned over its invasion of Ukraine.

News outlets including Tass and Interfax picked up the comments, which suggest Russia’s airlines will keep a portion of the planes to use and return others. The Air Transport Agency said Kudinov’s statements “do not correspond to reality” and pointed out that he isn’t authorized to speak officially on its behalf.

Even with the denial, the remarks aren’t easily dismissed given Kudinov’s relatively high rank and details that dovetail with a separate report on a new law addressing foreign-owned planes now in limbo. Almost 500 such aircraft in Russia have an estimated value of $10.3 billion, according to aviation consultancy Ishka.

“Part of the fleet will be given back,” Kudinov told reporters, according to Tass. He said airlines will decide themselves which jets to return, the outlet reported. Some planes are being re-registered in the country, according to a separate Tass report citing the official, who said spare parts that can’t be acquired from Airbus Boeing will be sought out in countries like India and Turkey.

Kudinov isn’t responsible for civil aircraft registration and doesn’t have reliable information, the Air Transport Agency said in a statement. His comments on relationships between Russian airlines and lessors don’t reflect reality, it said.

Kommersant reported separately on a draft rule that roughly corresponds with Kudinov’s statements. It would allow the government to seize some foreign-owned planes and require state approval for airlines to return any aircraft or engines to foreign lessors, the outlet said, citing a draft document. If the return is rejected, Russian airlines will be allowed to continue paying owners for jetliner rentals in rubles, it said.

Such an approach would allow state-owned Aeroflot and other carriers such as domestic leader S7 Airlines to keep flying Airbus and Boeing aircraft. It’s unclear how much value lessors including Dublin’s AerCap Holdings and Carlyle Aviation would recapture after Russia’s invasion of Ukraine two weeks ago drove a wedge through international aviation and cut off access to their planes.

The sanctions, airspace blockages and retaliatory measures implemented since then have left Russia relatively isolated, its airlines unable to fly to much of the world and barred from receiving new planes, parts or services. Outside the country, there is great uncertainty for investors in aircraft and securities tied to them.

European Union sanctions give lessors until March 28 to cancel contracts. AerCap and others have already said they will stop doing business in Russia and demand the planes’ return. But the government has threatened to nationalize them and told airlines to bring them back into the country. While a handful of repossessions have taken place, the bulk of the planes are out of reach of their owners.

Given the restrictions on maintenance and service, the value of any aircraft that remain in the country is likely to be greatly diminished.

Russia is also looking for alternatives for providing aircraft maintenance. China has refused to supply Russian airlines with spare parts, Tass and Interfax reported, citing Kudinov. The country will look in Turkey, India and other countries, they reported.