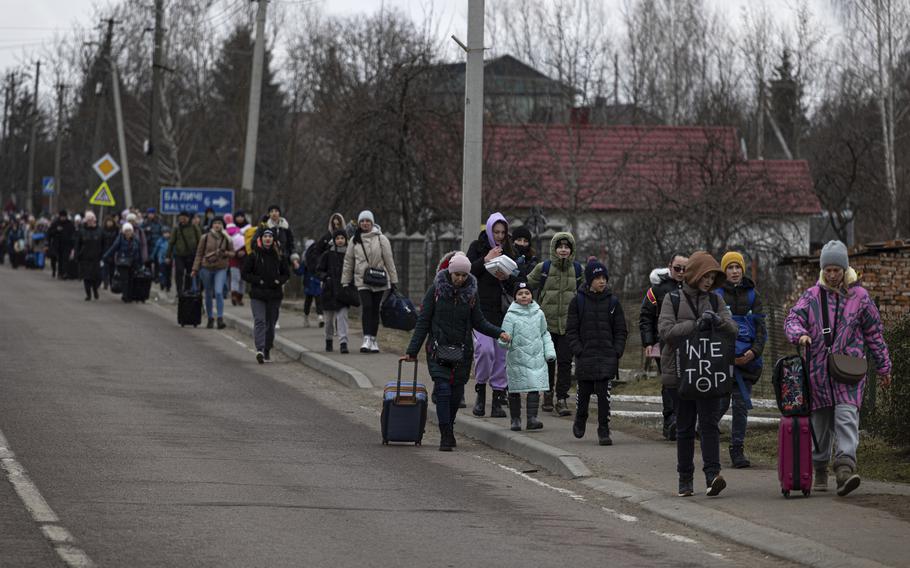 Groups of Ukrainian refugees walk along the road between Lviv and Shehyni, in Volytsya, Ukraine, Saturday March 5, 2022. The number of Ukrainians forced from their country since the Russian invasion has been increasing on a daily basis. (Marc Sanye/AP)

ZAHONY, Hungary — After bombs started falling in her hometown of Kharkiv, Annamaria Maslovska left her friends, her toys and her life in Ukraine and set off on a days-long journey with her mother toward safety in the West.

After finally crossing the Hungarian border by train along with hundreds of other Ukrainian refugees, the 10-year-old Maslovska said she had begun to worry about her friends in Kharkiv after the messages she sent to them on Viber went unanswered.

"I really miss them because I can't contact them, they just read my messages and that's all. I really worry, because I don't know where they are," she said in clear English from inside the train station at the border town of Zahony.

Annamaria, who was raised alone by her mother, is one of more than 1 million children who have fled Ukraine in the less than two weeks since Russia first invaded the country, something UNICEF spokesperson James Elder called "a dark historical first."

That means that children represent around half of the more than 2 million people that have fled the war, an exodus that the U.N. refugee agency has called the fastest-growing refugee crisis in Europe since World War II. There have even been cases of children having to make the journey alone.

Most of those fleeing the war have entered countries on Ukraine's western border, like Hungary, Poland, Slovakia, Romania and Moldova. The majority have gone into Poland, where 1.33 million refugees have crossed according to the Polish Border Guard agency.

Moldova Prime Minister Natalia Gavrilița told CNN on Sunday that one in every eight children in her country is a refugee.

While very young children may not grasp that their lives have been upended, older ones are aware of their hardship and risk suffering the psychological trauma of war and seeking refuge, experts say.

For Margot, a 1-year-old girl who traveled from Kyiv to the Siret border crossing in Romania, the journey was like a "little adventure," said her mother, Viktoria Filonchuk, 37.

But for other older children, she suspects they understand the "tragedy" of what they are going through.

"Such little kids maybe don't understand this, but kids of about 3 or 4 years understand all the tragedy. I think it is very hard for them," Filonchuk said.

Daniel Gradinaru, a coordinator of Fight for Freedom, a Christian NGO at the Romanian border, said that older children could be "marked for the rest of their lives" by the experience of unexpectedly leaving their homes and traveling for days in the cold.

"I hope that where they are going the people receiving them give them counseling," Gradinaru said.

Valeria Varenko, 9, traveled day and night to Hungary with her mother Julia and her little brother after bombings had forced them to shelter in the basement of their apartment building in the Ukrainian capital Kyiv.

The family reached a temporary refugee reception center in Barabas, Hungary on Wednesday where Valeria said she wanted to tell children left behind in Ukraine to be careful, and not to touch any objects in the street because "they could be bombs which can hurt them very much."

Her father stayed behind to help defend Kyiv from Russian troops edging closer to the city. She said she was very proud of him, and that she misses him "very much."

"I would really like him to come, but unfortunately he isn't allowed," she said.

In addition to children, most other refugees are women — the mothers and grandmothers of the children that are bringing them to safety — since Ukrainian men from age 18 to 60 aren't permitted to leave the country.

That policy is aimed at keeping men available to fight against Russian forces that are making deeper incursions into Ukrainian territory.

Annamaria's hometown of Kharkiv, Ukraine's second-largest city with 1.5 million inhabitants, has undergone heavy bombardment by Russian forces. Residential areas in the city near the Russian border were shelled for several days before a missile strike hit a government building in the city's central Freedom Square last week, killing at least six.

Even though she's only 10, the precocious Annamaria, now a refugee, already knows she wants to be an actress in the United States, and is proud of speaking English at a high level.

"I want to be an actress in USA and English is a very popular language," she said. "A big percent of people in the world know it and it's very easy to speak it in other countries."

She and her mother, Viktoria, planned to travel on to Hungary's capital, Budapest, but didn't know where they would go after that. Annamaria said she hoped to visit Disneyland in Paris.

Once the war ends, she said, she wants to go back to Kharkiv and reconnect with her friends who have been scattered by Russia's violent invasion.

"If war stops, I really want to go home because there are my friends, there are beautiful parks, supermarkets, centers, and playgrounds behind my house," she said. "Kharkiv, it's like a piece of your heart."

Follow the AP's coverage of the Ukraine crisis at https://apnews.com/hub/russia-ukraine