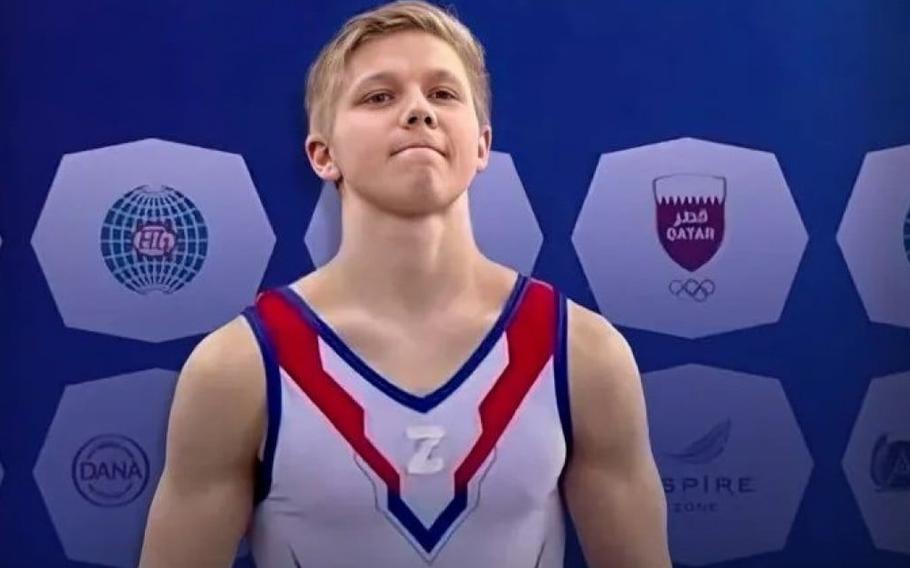 Speaking to state sponsored Russian outlet RT in an interview out Tuesday, gymnast Ivan Kuliak, 20, painted himself as a victim and voiced support for Russian troops as they bombard civilian populations in a neighboring nation. (Facebook)

A new pro-Russian symbol is emerging as the nation continues its assault on Ukraine. The insignia is bold, recognizable, and, importantly, according to some analysts, can be painted with one stroke: the letter Z.

It first caught the world’s attention when it was spotted on military vehicles clustered along the Russian border with Ukraine, in the days ahead of the invasion that began on Feb. 24.

But it’s since been appearing across Russia: Spray-painted on buildings, printed on T-shirts, plastered on billboards and brushed on tanks. Even children are forming Z-shaped lines at schools. Experts say it has quickly become a distinctive symbol of support of Russia’s invasion of Ukraine.

Although the symbol has been officially promoted by the military, and some experts say it appears to be a state-directed, they also say there is no way yet to know its origins for sure.

Who is using the Z symbol, and how?

Experts and social media users have speculated on the meaning of the Z, as well as other letters, including O, X, A and V, that have appeared on Russian tanks, sometimes framed by squares, triangles and other painted shapes. Some have suggested it is an official way to delineate infantries or identify enemies from allies.

But the letter Z of the Latin alphabet — which does not exist in the Cyrillic Russian alphabet — has been deployed beyond the military, pointing at what some experts say is a state-led effort to ramp up support for the war.

Several videos shared on social media last week showed what appeared to be flash mobs of young protesters dancing amid a pool of Russian flags and wearing black T-shirts with the Z.

The letter has also been painted on large apartment blocks and posted on advertising signs in major cities. In St. Petersburg, one billboard featured a large Z in black and orange stripes, accompanied by the words, “We don’t give up our own.”

The slogan referred to Russian President Vladimir Putin’s official line that the invasion’s aim is to “liberate” and “de-Nazify” Ukraine, an independent nation led by a democratically elected Jewish president.

An image widely shared online showed children at a hospice in Kazan, the capital of the republic of Tatarstan, in western Russia, lined up in the shape of a Z in the snowy courtyard and raising their right hands in a fist. Several schools have also posted images of children standing in a Z formation.

Photos published by the Associated Press from a pro-military rally in Volgograd, show cars parked to form the shape of a “Z.” Others show stickers on car windows featuring an orange and black Z with the message “For Ours” in support of Russian forces.

The governor of the Siberian region of Kuzbass, Sergei Tsivilyov, announced that he was changing the spelling of its name to add a capital Z in the middle.

Twenty-year-old gymnast Ivan Kuliak taped a white Z shape on his chest on the podium while receiving his bronze medal this week at an international competition in Qatar. And Maria Butina, a member of the Russian parliament who was convicted in the United States for being an unregistered foreign agent for Russia, posted a video of herself drawing a white Z on the lapel of her jacket.

While the symbol has been gaining traction over the past week, so too have antiwar protests in Russia and other places denouncing the war, even in the face of a clampdown on critics. About 58% of Russians approve of the invasion of Ukraine, while 23% oppose it, according to a survey conducted across Russia by independent polling groups last week.

What does the Z mean?

It was initially suggested the Latin letter Z was a Russian military symbol. But in recent days it has spread, and other theories about its meaning have emerged.

The Russian Defense Ministry over the past week has posted a string of graphics with the Z on Instagram — the first such case, alongside the phrase beginning with a Z: “Za pobedu,” or “For victory.” And later, “For peace” and “For truth.”

Many of the images coming out of Russia show an orange-and-black Z, the same colors found in a ribbon tied to the Order of Saint George, the highest battlefield award in Imperial Russia. It was established in 1769.

The color combination was also the informal symbol of the Soviet Union’s victory over Nazi Germany in World War II, The Washington Post reported, and was later widely used in 2014 by separatists as a way to show allegiance to Moscow during Russia’s annexation of Crimea.

The St. George ribbons are ubiquitous in Russia, particularly in the weeks ahead of the Victory Day celebration on May 9. They have served as a powerful and effective unifying symbol under Putin, tying together support for the state and the country’s historic contribution to the defeat of fascism.

Maria Snegovaya, a scholar of Russia’s domestic and foreign policy, argued the orange-and-black Z creates a link between the ongoing invasion and celebrations of the victory of World War II, which she said is understood as “the historic Russian fight against the West,” while bolstering the idea of Russia being “historically the winner.”

“It’s important for Putin to create this connection and build this quasi-ideology, which is not really well developed but it is definitely shaping — and whether it is successful remains to be seen,” she told The Post.

The larger meaning of Z

As the symbol appears to be everywhere in Russia, experts say it has now become potent, intended to show a united Russia in times of war.

In this sense, the Z became a symbol of a new Russian ideology and national identity, said Kamil Galeev, a former Wilson Center fellow who researched Russian identity politics from Moscow, in a long Twitter thread.

But experts like Galeev and others, argue its sudden use among many Russians follows a state-organized propaganda campaign to rally support, or at least create the impression to the outside world that Russian people stand behind the invasion.

“It is clearly propagated by and organized by the state with the purpose of creating a sense of broad public support for the invasion,” said Henry Hale, a professor of political science and International Affairs at George Washington University.

Hale added these symbols can be “powerful tools for authoritarian regimes,” like Russia which in this case is “promoting something simple, visible, adaptable, versatile and that way, it can take on a life of its own, while creating the impression of broad support for the regime.”

But such efforts can also be used to influence and coerce others into embracing the regime’s policies — or at least pretend to, said Hale, who specializes in Russian and Ukrainian politics.

“If many people see many others displaying symbols, it puts pressure on other people to show the same kind of support, to stay in the good graces of the regime, not run into trouble with neighbors and to adopt the socially desirable position.”

Alexei Yurchak, an anthropologist at University of California, Berkeley studying post-Soviet Russia and Eastern Europe, argued the fact that this is a new symbol never used before endows it with even more power.

“Everyone can easily draw it. They can endow it with all sorts of different meanings . . . And no one quite knows whether it’s true or not,” he said, adding that there is no “real meaning” of the symbol.

Some people have connected it to the fictional character of Zorro, the avenging vigilante fighting to protect the common people. Or “For Victory.” Or “Zapad,” the Russian word for “West.” Or the St. George’s ribbon symbolizing heroism and resistance.

“The real meaning is all of those meanings,” Yurchak said. “It becomes that the multivalence of these meanings is the strength of the symbol.”

The Washington Post’s Jonathan Edwards contributed to this report.