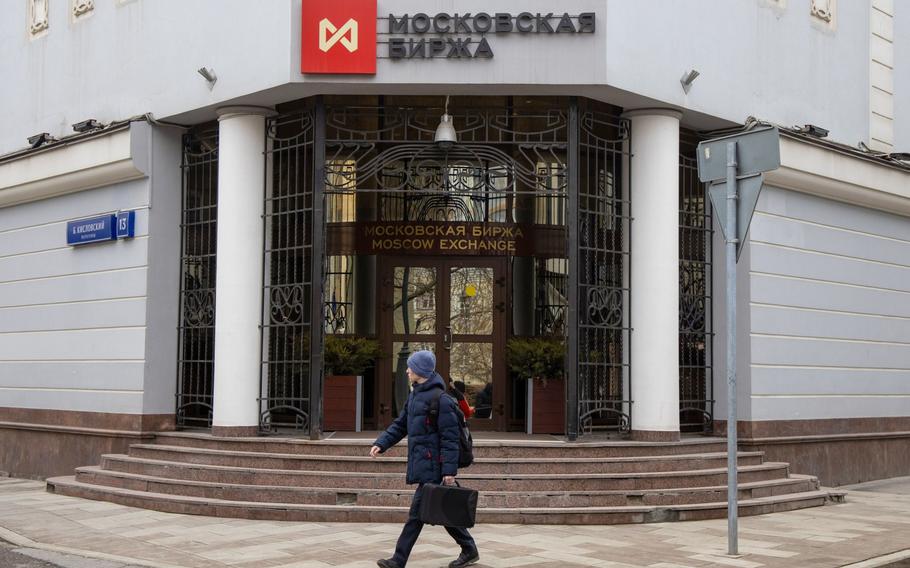 The Russian stock market will be closed to trading until at least next Wednesday, marking a record in the country’s modern history, in a continuing bid to stave off the impact of global sanctions for domestic investors.

The Moscow Exchange said on Friday that trading across all markets will be shut March 5, 7 and 8. Since the Moscow Exchange’s equity trading was last open a week ago, Russian stocks listed in London lost more than 90% of their value before getting suspended, global index providers announced plans to remove the nation’s shares from their indexes and European companies with business exposure to the country lost more than $100 billion in market value.

Russia’s ruble sank as much as 8.6% per dollar at the open in Moscow, before paring the decline to 1.4% at 107.50 as of 10:21 a.m., down 23% for the week. Russia Friday morning banned short selling in the euro on its currency and stock markets, the exchange said.

As a result of international sanctions over Russia’s invasion of Ukraine — which hit everything from its ability to access foreign reserves to the SWIFT bank-messaging system — uncertainty has gripped Russia’s markets across asset classes, with many investors deeming the nation “uninvestable.” Russia has promised to step in and prop up the equity market with up to $10 billion when it reopens.

The reaction in Russian stocks when they reopen is likely to be “negative unless the government and central bank step in buying stocks. That could provide support but I find it hard to contain the wave of sell orders mostly from foreigners.” said Cristian Maggio, head of portfolio strategy at TD Securities in London.

The plunge in foreign-listed shares of Russian companies is an indicator of how local equity investors might react when Moscow trading resumes. The London Stock Exchange on Thursday suspended trading in dozens of Russian depositary receipts, citing the war in Ukraine and market conditions. MSCI Inc. and FTSE Russell on Wednesday said they would cut Russian equities from widely tracked indexes.

Meanwhile, several exchange-traded funds were also suspended in the wake of the events. The creation of shares for the VanEck Russia ETF, the biggest ETF investing in Russia, has been halted until further notice, effectively stopping inflows into the fund. BlackRock Inc did the same with its iShares MSCI Russia ETF, among several other firms.

While a rare occasion, countries have halted stock trading in the past due to unusual circumstances.

The New York Stock Exchange, London Stock Exchange and other bourses were shut in 2001 after the 9/11 attack. Trading in U.S. shares resumed after being closed for four trading days, with the S&P 500 slumping about 5%.

Egypt’s stock exchange was closed for nearly two months in early 2011 amid protests that toppled President Hosni Mubarak’s 30-year regime. The shutdown followed a drop of 16% in the nation’s equities in just two days. And when the index reopened, the selloff resumed and the index ended up 49% down for that year.