US tech dominance could offer leverage over Russia - or backfire 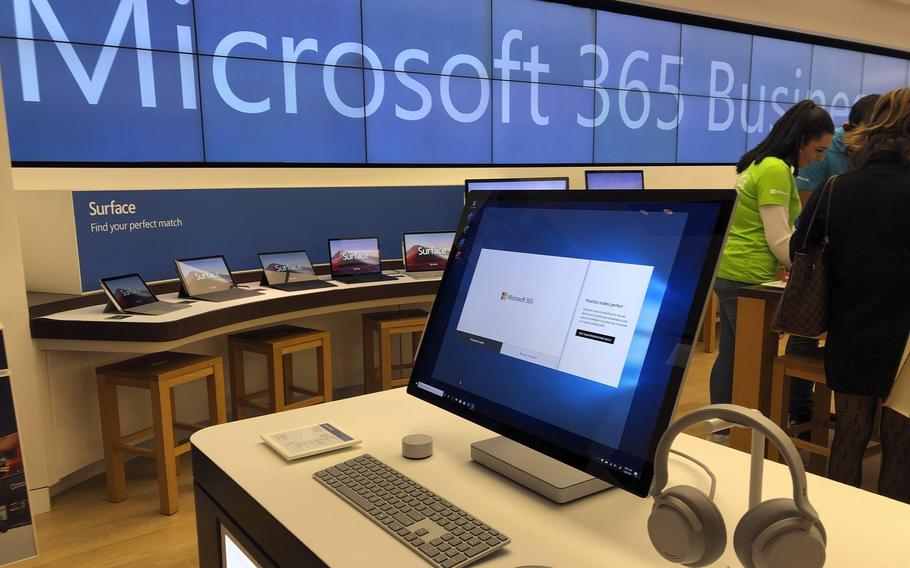 Withholding technology can be a soft-power weapon to potentially turn a population against its leaders. Yet it also can be costly to the U.S. economy, slow to deliver results and scattershot in its impacts - much more likely to affect ordinary Russians using their iPhones than generals firing missiles into Ukrainian cities. (Steven Senne/AP)

But as U.S. officials seek to thwart Russian aggression in Ukraine, they are again encountering the limits of this leverage, experts say.

Withholding technology can be a soft-power weapon to potentially turn a population against its leaders. Yet it also can be costly to the U.S. economy, slow to deliver results and scattershot in its impacts - much more likely to affect ordinary Russians using their iPhones than generals firing missiles into Ukrainian cities.

There is another cost as well: America’s dominance of global technology, experts warn, was built over generations but could be eroded in just a few years as rival powers - and especially Russia and China - invest billions of dollars to develop alternative technologies at home, in part to decrease American leverage at moments such as these.

Even as Russians furiously buy iPads, Android devices and Windows-based computers, President Vladimir Putin is pushing hard to wean the country from Western technologies. And if Russia and other U.S. rivals succeed, there also could be long-term damage to the ability of American intelligence agencies - particularly skilled in exploiting U.S.-made tech - to track developments in the next conflict, experts say.

The upshot is that while technology sanctions can be unquestionably powerful, it’s a power that, when deployed, can spark backlashes that undermine its long-term utility. Depriving rivals of American-made technology also threatens the future global prospects of an industry that has driven U.S. economic growth for most of this century. The rise of a Russian Google - or a Chinese Facebook or an Iranian YouTube - are not theoretical developments. They are happening already.

“When you cut them off from American tech, they will find alternatives,” said Peter Micek, general counsel for Access Now, a human rights group that lobbies to keep Internet services available to people worldwide. “They might suck for a while, but give them time, and they’ll figure it out.”

U.S. officials and technology executives are attempting to navigate this chessboard of risk and reward as they assemble a potent set of punitive moves against Russia.

The result has been growing restrictions on hardware, with Apple joining others in blocking sales to Russia, and moves by major social media platforms to curb the spread of Russian propaganda through its state-funded RT information service - often in response to the demands of Western governments. Digital purchasing tools, such as Apple Pay, also have stopped working as Western sanctions cut off Russian banks for ordinary operations.

But calls by Ukrainian officials to deprive Russians in general of access to social media and even the Internet itself have sparked significant resistance from both the companies and digital rights groups, which argue that the likes of Twitter, WhatsApp and Telegram are key to delivering information in Russia. They often are the only sources of news on the horrors Putin is inflicting on Ukrainians at a time when his control over national news media is nearly total.

The Russian government, meanwhile, has been squeezing these same companies, throttling Facebook and Twitter, and threatening action against Google in retaliation for its YouTube subsidiary limiting access to RT in response to demands by Western governments.

But as this battle plays out, the idea of depriving Russia of software updates or online support from American companies has not gained traction even though such moves could gradually erode the functioning of technological tools used every day by the Russian government and its citizens.

Such actions might heighten frustration with Putin, experts say, but also could intensify animus against Western powers, convincing political leaders to pursue more aggressive strategies to undermine Silicon Valley’s technological hegemony. Another risk for the United States is more aggressive adoption by Russia of Chinese technology, which increasingly is offering viable alternatives to American products and has made massive financial investments in becoming independent from Silicon Valley.

These shifts could be felt especially by Russian consumers long acclimated to iPhones and other American technology. Rarely, say experts, are political leaders the main victims of sanctions, despite efforts to target their wealth. More often it is ordinary citizens of a country who lose access to cash, imported goods or, potentially, the technological conveniences of modern life - including information from unofficial sources.

“You’re ultimately going to be putting pressure on populations. That’s inevitable,” said Richard Nephew, a former U.S. State Department sanctions official, now a senior research scholar at Columbia University’s Center on Global Energy Policy. “The real question is whether what you are doing in country is making life more difficult, as opposed to life threatening.”

In the absence of broader U.S. sanctions on consumer technologies in Russia, Ukrainian government officials have been mounting their own social media pressure campaign to push Western tech companies to cut their products and services from Russia. Alex Bornyakov, Ukraine’s deputy minister of digital transformation, said they believe cutting off popular tech products would be a powerful way to turn public opinion in Russia against Putin - especially among young people.

For several years Russia - like China - has pushed policies and investments to insulate itself against American technology and the geopolitical leverage that comes with it. That has helped Yandex, for example, become Russia’s most popular search engine.

Russia also has developed alternatives to the Windows operating system and Intel’s chips, though its Zhores supercomputer - one of Russia’s fastest - uses graphics accelerators made by Nvidia, based in northern California, according to Samuel Bendett, an expert on Russian military technology for CNA, a research group.

Russia requires the use of homegrown software on some products sold there and has a list of approved technology that government purchasing agents are supposed to favor, said Justin Sherman, an Atlantic Council fellow who studies Russia and Internet security.

These efforts, however, have run into the head winds of economics and efficiency because American tech tends to be cheaper, better, more readily sourced and more easily integrated with other systems. Silicon Valley’s technical standards prevail worldwide - for now.

“This domestic tech push has been a mess,” said Sherman. “Much of the Western software that the Kremlin wants gone or replaced is still there.”

Bendett, the CNA researcher, noted in a tweet Wednesday that Russian energy giant Gazprom just this week announced a major infusion of new technology, including computers and tablets running Apple and Google-made software.

“Import substitution? Doesn’t look like it for now for Russia’s Gazprom, which decided on March 1 to provide its subsidiaries across the country with foreign-origin IT and computer equipment,” Bendett tweeted.

In an interview, he said the important exception to the dominance of Western technology is within the Russian military. While government, corporate and consumer tech remains heavily dependent on the United States and Western companies generally, military systems are mostly built within Russia, despite the use of some foreign-made microchips.

Even the most aggressive sanctions regimes would have little chance of slowing the military’s shelling of Kharkiv or the tank convoy headed toward Kyiv - though many observers have noted the apparent use by Russian soldiers of smartphones, presumably connected to Ukraine’s own cellular network. That system, experts say, is dominated by European technology.

But the experts agree that such advantages are unlikely to be permanent and are vulnerable to the tides of global events, and especially conflicts in which Western nations use their power to try to bring rivals to heel.

China’s investments in new chip technologies and the aggressive expansion of telecommunications supplier Huawei have changed the technological balance of power worldwide, despite U.S. sanctions blocking the expansion of Huawei.

In Iran, amid the Trump administration’s intense sanctions to prevent that nation from acquiring nuclear weapons, the government ordered disconnection from the global Internet during political protests in November 2019. That cut off Iranians from the outside world while also allowing the country’s leaders to test its so-called “halal Internet,” an internal network already under development for several years by that point, along with a suite of apps built domestically.

The disruption hurt businesses and complicated the lives of Iranians. But, said Micek of Access Now, at least some of the homegrown apps worked, allowing digital life to proceed, if less efficiently.

“This really does play into the dictator’s hands,” he said. “We are actively helping catalyze the development of a viable alternative Internet, and I don’t want to see that happen in Russia.”

The Washington Post’s Cat Zakrzewski contributed to this report.