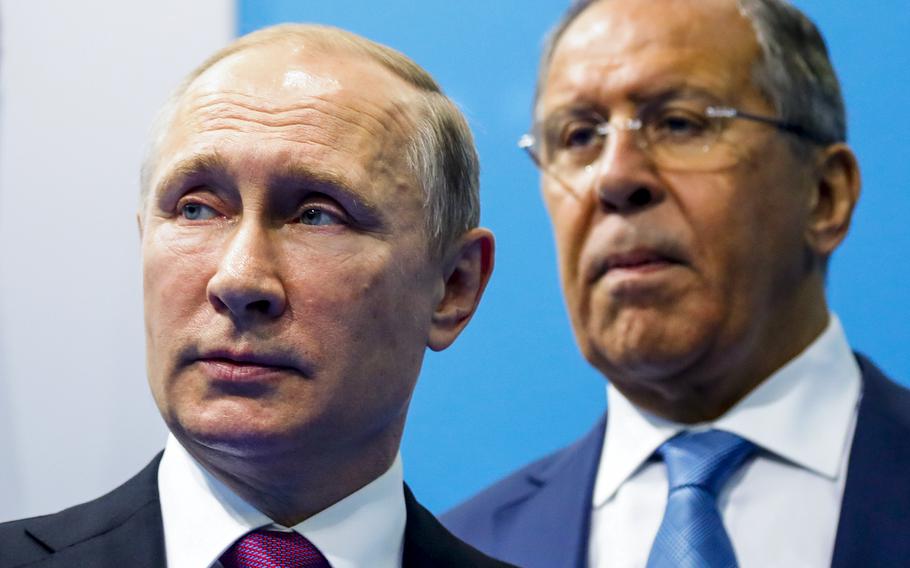 Russian President Vladimir Putin, left, and Foreign Minister Sergey Lavrov stand while waiting for Turkish President Recep Tayyip Erdogan prior to their talks at the G-20 summit in Hamburg, northern Germany, July 8, 2017. In his role for nearly 18 years, Lavrov, 71, has seen relations with the West shift from near-friendly to openly hostile, plummeting to a catastrophic new low with the Russian war against Ukraine. The invasion prompted the European Union to freeze the assets of both Putin and Lavrov, among others — an unprecedented blow to Moscow’s pride. (Alexander Zemlianichenko/AP)

As world leaders step up the enforcement of sanctions on Russian oligarchs to put pressure on those close to the Kremlin in response to Russia’s invasion of Ukraine, government officials are hitting the oligarchs where it hurts: Some ultrawealthy Russians are having to deal with efforts to seize their luxury yachts valued in the hundreds of millions of dollars.

Russian oligarch Igor Sechin, the CEO of oil giant Rosneft, docked the Amore Vero - “true love” in Italian - in the French Mediterranean port of La Ciotat in early January, and he had planned to leave on April 1. The 281-foot-long super yacht, which can accommodate 14 guests and 28 crew members, has an estimated value of $120 million, according to Superyacht Fan, a website tracking luxury yachts.

But with invasion forces wreaking widespread destruction in Ukraine, the French Finance Ministry announced Thursday that it seized the Sechin-owned yacht on Wednesday night. Sechin, who was deputy prime minister of Russia between 2008 and 2012, is among the oligarchs who have maintained close ties to Russian President Vladimir Putin, according to the European Union. Once described by a Moscow journalist as the nation’s “Darth Vader,” Sechin is “considered to be one of the most powerful members of the Russian political elite,” the E.U. said this week.

“Thank you to the French customs officers who are enforcing the European Union’s sanctions against those close to the Russian government,” French Finance Minister Bruno Le Maire wrote on Twitter.

Sechin’s Amore Vero is among the luxury yachts targeted by countries in the wake of the invasion. The fate of the Dilbar remains uncertain after German authorities denied a Forbes report that the vessel had been seized. The 512-foot super yacht worth hundreds of millions of dollars is owned by Russian oligarch Alisher Usmanov, who was also among the Russian elite placed under E.U. sanctions this week.

Another $600 million super yacht, Solaris, a 461-foot-long vessel owned by oligarch Roman Abramovich, is one of several Russian yachts docked in Barcelona as the country continues to probe potential sanctions.

In response to the sanctions and seizure threats from President Joe Biden and leaders abroad, a handful of luxury yachts owned by Russian billionaires have reportedly reached the Maldives, an island nation in the Indian Ocean that does not have an extradition treaty with the United States. Some of the oligarch-owned ships that have been moving toward the Maldives and Montenegro in recent days are estimated to be worth between $65 million and $150 million each.

The movement of the luxury yachts comes as the White House and Treasury Department are expanding the number of Russian oligarchs subject to U.S. sanctions, aiming to punish the financial elite close to Putin. Biden said in his State of the Union address Tuesday night that the United States would join Europe in efforts to punish Russian oligarchs and “seize their yachts, their luxury apartments, their private jets.”

The Justice Department on Wednesday announced the creation of “Task Force KleptoCapture” to coordinate prosecutors and other federal investigators in the effort to enforce sanctions against “corrupt Russian oligarchs.” In a round of new sanctions against Russian oligarchs announced Thursday, the National Security Council announced Thursday that all property from Usmanov, the Dilbar yacht owner whom Forbes has estimated to be worth more than $15 billion, is “blocked from use in the United States and by U.S. persons.”

“We’re coming for your ill-begotten gains,” the president said this week.

Questions have been raised surrounding whether it’s legal for the U.S. government to seize yachts from Russian oligarchs because of their ties to Putin. As The Washington Post’s Philip Bump wrote, Article I, Section 8 of the U.S. Constitution gives the federal government authorization to issue documents empowering private individuals to legally seize foreign vessels. While the practice known as privateering is archaic, the idea has come up in recent decades. Perhaps the most notable example came after the Sept. 11, 2001, terrorist attacks when then-Rep. Ron Paul, R-Texas, proposed legislation that would allow privateers to “seize the person and property of Osama bin Laden and any other individual responsible” for the attacks.

Data from the global intelligence group MarineTraffic shows that several yachts owned by Russian oligarchs have been moving toward the Maldives and Montenegro in recent days. According to shipping tracking data, two pleasure vessels owned by aluminum magnate Oleg Deripaska and iron-and-steel mogul Alexander Abramov entered the waters near Malé, the capital of the Maldives, on Wednesday.

Three more yachts owned by Russian magnates were also seen sailing in the island nation’s waters, Reuters reported, including one belonging to Vladimir Potanin, a Russian nickel tycoon whose net worth is more than $25 billion. Potanin’s Barbara, which is named after his youngest daughter, is a 290-foot super yacht with an estimated value of $150 million. Also sailing to the Maldives is a super yacht owned by oil executive Vagit Alekperov, data shows. At 230 feet long with six cabins for guests and a glass-bottom swimming pool, Alekperov’s Galactica Super Nova has an estimated price tag of $80 million.

It’s no easy task to move these super yachts docked in European ports to the Maldives. For instance, if Sechin’s Amore Vero were able to get out of the French port and head toward the Maldives, that’s a distance of nearly 5,000 miles. It’s a slightly longer trek for Abramovich’s Solaris, if it were to leave from Barcelona.

Some Russian oligarchs have made public pleas to Putin to stop the invasion. Days after the invasion began, Deripaska called for negotiations between Moscow and Kyiv. Billionaire Evgeny Lebedev appealed to Putin in the Evening Standard, a British newspaper he owns, asking that Russian troops stop “killing their Ukrainian brothers and sisters.”

Even as more oligarchs have their super yachts seized because of the invasion, the Russian president’s own yacht is reportedly doing all right. According to CBS News, a satellite image shows a yacht believed to be owned by Putin docked at a Russian port - and out of reach of any possible sanctions or seizure. John Smith, former director of the Treasury Department’s Office of Foreign Assets Control, told the outlet that Putin was “crafty” in knowing where to put his yacht.

“He knows how to hide when he needs to,” Smith said.