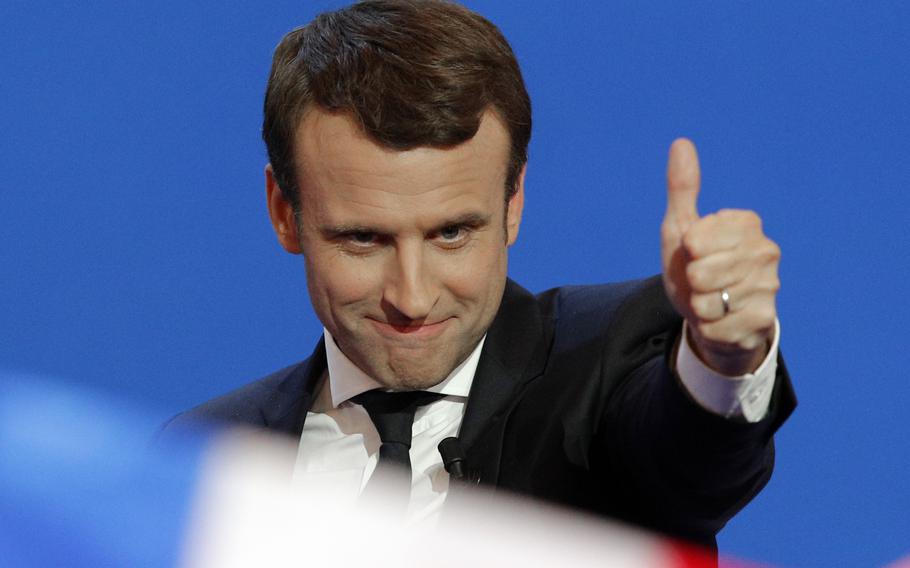 Even though it was never really in doubt that Macron would seek reelection, the surprisingly low-key announcement is likely to mark the true beginning of the French election campaign, which has kept the country’s political observers in suspense for much of the past year but had lacked the candidate who’s most likely to win in April. (Christophe Ena/AP)

Even though it was never really in doubt that Macron would seek reelection, the surprisingly low-key announcement is likely to mark the true beginning of the French election campaign, which has kept the country’s political observers in suspense for much of the past year but had lacked the candidate who’s most likely to win in April.

Macron’s poll numbers have remained stable at 24 or 25 percent since last April, while his contenders’ fortunes either rose or fell, with far-right candidate Marine Le Pen currently in second place, at 17 percent, behind the centrist Macron. The two candidates who win the most votes April 10 will compete against each other in a runoff election two weeks later.

One week ago, it was unclear whether Le Pen and her far-right contender, Éric Zemmour, would even be on the ballots in April, as they lagged behind in the crucial race to secure the 500 signatures from elected officials that are required to stand in the election. With only days to go until the deadline this Friday, Zemmour and Le Pen this week succeeded in crossing the threshold, which Macron had passed weeks ago.

Macron’s team repeatedly said that the French leader wanted to avoid being drawn into the tumultuous election campaign until the very last moment, initially to respond to the omicron coronavirus wave, and in recent weeks to focus on the escalating crisis in Ukraine. The coronavirus crisis now appears to be largely over, with French Prime Minister Jean Castex having announced the end of the country’s vaccine passport Thursday, but the crisis in Ukraine is likely to consume much of Macron’s attention over the next weeks.

“Rarely has France been confronted with such an accumulation of crises,” Macron wrote in his letter to French voters, published by several regional newspapers Thursday. “I am a candidate to defend our values ​​that are threatened by the disruptions of the world.”

In a speech Thursday, Macron had described the Russian attack on Ukraine as a “turning point in Europe’s history.”

It will also probably be a turning point in the campaign, which had so far centered on topics that in many ways appeared to echo the lead-up to the 2017 French election, when the influx of migrants from the Middle East and a string of terrorist attacks put identity politics at the forefront of the public debate.

Whereas almost all leading candidates advocated in favor of restricting migration just over a week ago - believing that they had voters on their side - surveys suddenly show broad support for welcoming refugees into France, though it’s a sentiment that appears to be limited to refugees from Ukraine.

Le Pen, who was long one of Russian President Vladimir Putin’s biggest defenders, had to walk a tightrope over the past week as she distanced herself from the Russian leader amid near unanimity among the French that Putin is primarily responsible for the war in Ukraine.

Campaign leaflets that showed Le Pen shaking Putin’s hand, and of which over 1 million copies had already been printed, were withdrawn by her campaign team, the left-wing Libération newspaper reported. Le Pen’s team has denied that they ordered the leaflets to be withdrawn.

One of the key themes of Le Pen and Zemmour - that France is a nation in decline - may also be an ill match for a period when the European Union is stunning the world, and itself, with a newly found sense of unity.

It remained unclear this week whether the outpouring of support for Ukraine’s war refugees across Europe will make it more difficult for Le Pen and Zemmour to keep the French public focused on identity politics, their preferred topic.

Zemmour, who said at a rally last year that the United States has “done everything it could to separate us from Russia,” appeared eager to shift the public debate away from Eastern Europe on Monday, five days after the invasion. “It is not Russia that threatens France” but rather “the great replacement and the Islamization of the country,” he said, according to Paris Match magazine.

That discourse appeared to fall short of rallying voters the same way this week as it once did. Meanwhile, Macron appears to be benefiting from his role as the incumbent, which has put him at the center of the news agenda.

Before the Russian invasion, the French president had sought out a key role in negotiations between Russia and Ukraine, jet-setting between Paris, Moscow and European capitals to prevent a war. The failure of those diplomatic efforts so far does not appear to have hurt Macron domestically - some surveys have even shown a boost in Macron’s poll numbers over the past week.

But as Europe has entered its most volatile period in decades, the crowded field of candidates running against Macron may still be able to capitalize on topics that could prove damaging for the incumbent.

The E.U.’s sanctions against Russia have already come at an economic cost, on top of those borne from the turmoil of war. Many of the effects, including higher gas, electricity and food prices, have either already set in or could hit in the next six weeks, according to some estimates.

In a written address to parliament last Friday, Macron prepared voters for volatile weeks and months ahead. “This major crisis will have consequences on our lives, our economy,” he said.

In previous elections, concerns over rising inequality and surging inflation would have likely boosted the chances of France’s Socialist party, whose presidents have governed France for about two of the past four decades.

But less than six weeks from the first round of the election, that party’s candidate, Paris mayor Anne Hidalgo, polls at around 2 percent. Her failure to gain any momentum in the campaign reflects a broader malaise that has gripped France’s political left, which has lost a substantial number of voters to Macron or abstentionism.

The woman who just weeks ago was seen by some as a possible unifier of the left - former justice minister Christiane Taubira - won’t even be on the ballot in April. After failing to cross the 500 sponsorships that are needed to run, she dropped out of the race Wednesday.