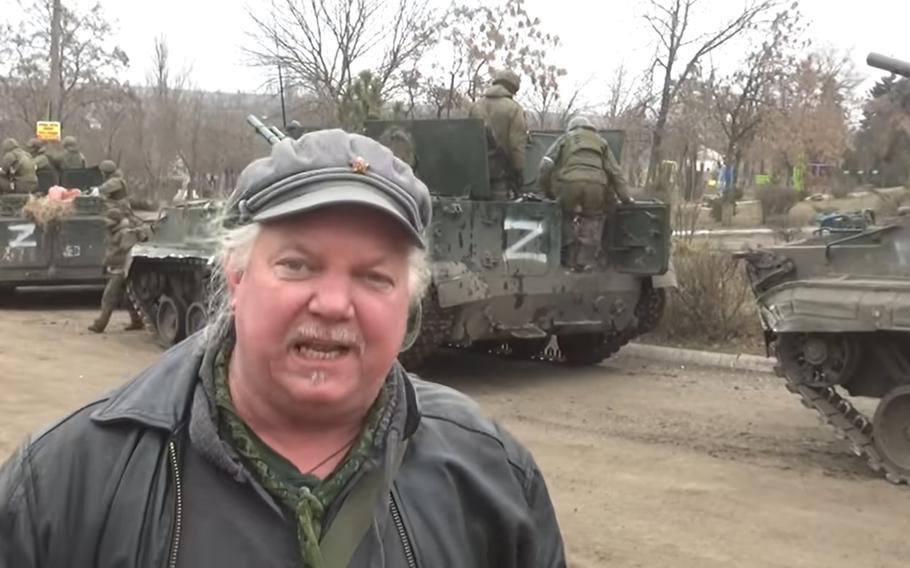 Russell Bonner Bentley is a former Texas resident who left for Europe and signed on with Russian forces in 2014 when the country annexed the Crimean Peninsula, media outlets reported. (Screenshot from YouTube)

(Tribune News Service) — A video of a Texas man embedded with Russian soldiers “at the front line” on the invasion of Ukraine is stirring anger online.

The video was taken and shared Monday, Feb. 28, by Russell Bonner Bentley, a former Texas resident who left for Europe and signed on with Russian forces in 2014 when the country annexed the Crimean Peninsula, media outlets reported.

A white-haired, mustachioed man in his 50s, Bentley frequently posts pro-Russian content on social media, often referring to himself by his simple nickname, “Texas” — or “Tejas.”

“It’s Tejas on the front line with the … liberators of Ukraine. These guys are tough, these guys are ready, and there’s plenty of them,” Bentley said in the Feb. 28 video posted on Youtube, which had been viewed over 120,000 times as of March 1.

Since posting, the video has caught attention on various social media platforms, including Twitter. While many have simply mocked Bentley, others have expressed anger, calling him a “traitor.”

Twitter account @BadWeaponTakes shared the video, commenting “TFW the weird uncle you only see at Thanksgiving turns up in Ukraine.”

While it is legal in some circumstances for U.S. citizens to fight for foreign countries, certain actions will result in having citizenship revoked, McClatchy News reported.

Bentley’s last job in the U.S. was as an arborist in the Austin area, Texas Monthly reported in a 2018 article. Prior to that, he was wanted by U.S. Marshals, allegedly worked as a drug trafficker, did a stint in prison then went on the run after breaking out of a halfway house, and had a somewhat notable foray in politics primarily as an advocate for marijuana legalization — all experiences that, he says, led him to where he is today.

He enjoys a sort of warrior-celebrity status, he told the Texas Monthly. People in Russia recognize him as “Comrade Texas,” he told the magazine, a charismatic American who wears a cowboy hat during gun battles and champions a staunchly pro-Russian worldview.

On Bentley’s Youtube post, the caption claims a “tsunami of Heroes and steel…will wash away all nazis and foreign occupation, and bring a free Ukraine back into the Slavic family where it belongs.”

Putin has put forth “de-Nazification” as a primary reason for invading Ukraine, suggesting that the people of Ukraine are in danger of falling prey to powerful fascist forces in their midst unless Russia intervenes — a claim that has been condemned by Western leaders and by Ukrainian President Volodymyr Zelenskyy, who is Jewish.

“These guys are going to save and liberate all the good people in Ukraine,” Bentley said in his video.

“And the bad people? Boom,” he said, kicking the air for emphasis. “Kick their ass.”