Russia’s nuclear exercise last month was timed to send a message, US says 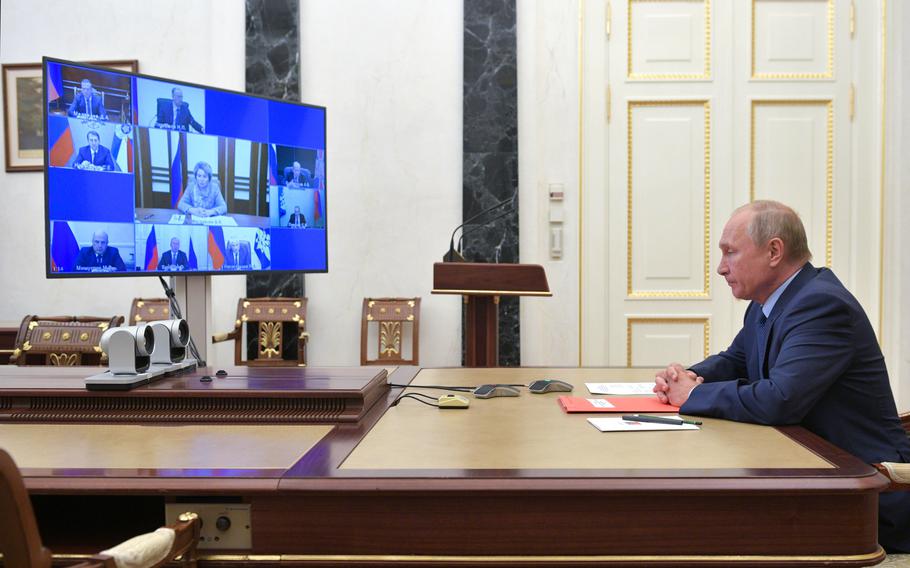 In this file photo, Russian President Vladimir Putin attends a meeting with the members of the Security Council via teleconference call, in Moscow, on Oct. 16, 2020. (Alexei Druzhinin, Sputnik/AFP via Getty Images/TNS)

Putin participated in the latest exercise and one in October 2019 that showed “a high-level of readiness across Russia’s strategic nuclear forces” and was intended to serve “as a visible message to the U.S. and NATO,” Admiral Charles Richard said in prepared testimony to a House Armed Services subcommittee Tuesday. The 2019 event was Russia’s largest strategic nuclear exercise since the collapse of the Soviet Union and “notable for the size and scope of the nuclear forces involved and strategic messaging.”

Putin set his nuclear arsenal on a “special regime of high alert combat duty” in the midst of his invasion of Ukraine, citing “aggressive statements” from the opposing nations.

Gen. Glen VanHerck, the head of U.S. Northern Command, said in his prepared testimony that “Russia is the primary military threat to the homeland, and their focus on targeting the homeland has provided the model other competitors are beginning to follow.”

He said Russia has invested “significant resources to modernize all three legs of its nuclear triad in an effort to ensure its ability to deliver unacceptable damage on our homeland during a conflict.” He cited the December 2019 deployment of the world’s first intercontinental ballistic missiles equipped with a hypersonic glide vehicle.

The new weapons are designed to glide at extremely high speeds and maneuver at low altitudes “to complicate our ability to detect and track,” VanHerck said. “In the next few years, Russia seeks to field a new heavy-lift ICBM” that Putin “claims will be able to deliver nuclear warheads to North America from both northern and southern trajectories” and circumvent tracking by U.S. ground-based radars.