Putin’s war on Ukraine is drawing battle lines within Russia 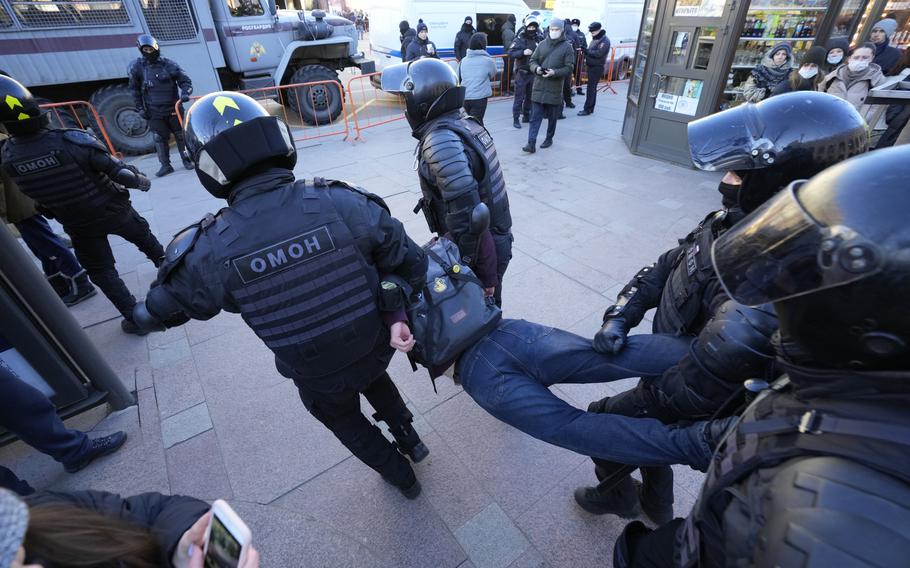 Police detain a demonstrator during an action against Russia’s attack on Ukraine in St. Petersburg, Russia, Sunday, Feb. 27, 2022. Protests against the Russian invasion of Ukraine resumed on Sunday, with people taking to the streets of Moscow and St. Petersburg and other Russian towns for the third straight day despite mass arrests. (Dmitri Lovetsky/AP)

MOSCOW - When Russians showed shame and grief over President Vladimir Putin’s invasion of Ukraine, his most loyal propagandist was withering: “If you are now ashamed that you are Russian, don’t worry, you’re not Russian,” the editor in chief of state-owned broadcaster RT, Margarita Simonyan, sniped on Twitter.

The invasion that united NATO and Europe on sanctions as never before also divided Russians. One one side: an outward-looking urban middle class, who vacation in Europe, while away time scrolling through Western apps on their iPhones and send their children to universities abroad. On the other: Putin loyalists, many less-educated Russians or older people raised on Soviet propaganda.

In Kamenka village in Russia’s southern Rostov region, close to the Ukraine border, Alexei Safonov, 47, was horrified at the news that Russia began its attack last week. Then he got to work as chief engineer at an ice-skating rink, and was sickened to find his colleagues celebrating.

“The feeling was it’s high time we showed what we could do to those ‘Nazis,’ so it’s high time we started this operation,” he said, referring to Putin’s claim that he would “denazify” Ukraine and its leadership. “That made me feel really dejected and depressed. People around me are enthusiastic about it. When I look at them, I don’t see the light at the end of the tunnel.”

That night he wrote an anguished social media post, lamenting the “horror and shame” of a war that “will be catastrophic.” It initially received 19 comments, most attacking him. A friend, a local policeman, warned him to delete it, but he refused.

At work the next day, the general director of the complex stormed in, shouting and swearing at Safonov.

“He said, ‘Either you remove that post or we don’t need people like you around here.’ He told me to sign a resignation letter but I just packed up and left,” Safonov recounted.

Later, three police armed with machine guns came to his home, arrested him and charged him with showing disrespect for society and the Russian Federation. He faces court on Friday, and fears that authorities may concoct a more serious charge.

The war’s seismic impact is just beginning to dawn on many Russians, deepening these fissures in society. State television hosts tell viewers that the sanctions prove the West hates Russians.

The cascading effect was swift. Google blocked YouTube channels connected with state-run media RT and Sputnik. Even Europe’s far-right leaders and strongmen in Central and Eastern European balked. The ruble crashed and the Central Bank stopped trading for two days as Putin barred Russians from depositing forex into accounts or sending it abroad.

When Foreign Minister Sergei Lavrov stood up to speak Tuesday at the Geneva Disarmament Conference, almost every delegate left the hall. When senior official Vyacheslav Volodin flew home from an official trip on the weekend, his plane was turned away from airspace in Sweden and Norway.

To be fair, outside of liberal circles, the public criticism is still a relative trickle in a country where dissent is not tolerated. It has, however, included a few powerful oligarchs, although they have little to no sway over Putin.

Oleg Deripaska, a billionaire industrialist, called for peace “as soon as possible” on the Telegram messaging app. Ukraine-born mogul Mikhail Fridman wrote a letter to staff at LetterOne, first reported by the Financial Times, saying that war could never be the answer.

State television host Ivan Urgant posted a black square on his Instagram feed on invasion day, along with the words “Fear and Pain. No to war.” His show the next day was canceled and it’s not clear it will ever air again.

Even the daughter of Kremlin spokesman Dmitry Peskov posted a black banner on social media with the words “No to war,” though she swiftly deleted it.

Anissa Naouai, chief executive of Maffick, a company with RT links and one of Putin’s staunchest defenders for years, announced Tuesday she was “cutting all ties with RT,” posting a black banned on Twitter with the words “Russia without Putin.”

Apolitical people felt the need to make their opposition clear. Peter Svidler, Russian chess grand master, usually tweets about chess, wordle and dogs. But last week he wrote that it was impossible to stay silent. “No to war,” he posted.

“Let’s at least get some things stated live on air. I do not agree with the war my country is waging in Ukraine. I do not believe Ukraine, or Ukrainian people, are my enemies, or anybody’s enemies,” he said speaking Tuesday on a Chess 24 stream.

Almost 6,500 protesters in dozens of cities have been arrested since the invasion, according to rights group OVD-Info. Psychiatrists, doctors, architects, journalists, actors, historians, computer programmers, directors, orthodox priests and others, signed open letters protesting the war.

If the Putin did not change course, Russia would “take its place as an aggressor and rogue state, a state that will bear responsibility for its crimes for generations,” said Ivan Zhdanov, director of the Anti-Corruption Foundation, headed by jailed dissident Alexei Navalny. Zhdanov spoke in a video urging a national campaign of disinformation.

But as Russia’s economy came under intense pressure from sanctions, Russian officials doubled down and hardened their rhetoric.

In a Russian Foreign Ministry tweet Monday, spokeswoman Maria Zakharova questioned if “the process of denazification in Germany after the end of World War II” was really complete, commenting on Germany’s decision to send arms to Ukraine.

Lawmaker Andrei Klimov called for treason charges against those who “cooperated with foreign anti-Russian centers bringing obvious detriment to our national security.”

The older generation of Russians, who lap up state television, fear the West and admire Putin for the stability he brought after the chaotic post-Soviet 1990s. But the predictability is gone.

The ice-rink engineer Safonov said ordinary low-income Russians would be most hurt, but wealthy elites “will be fine as usual. Maybe they will be a little shaken but not much, I’m sure.

“To Russia, it means we are going back into the caves,” he said. “I think it’s like the end, for Russia.”

Natasha Abbakumova contributed to this report.