Civilians are dying in Ukraine, but exactly how many remains a mystery 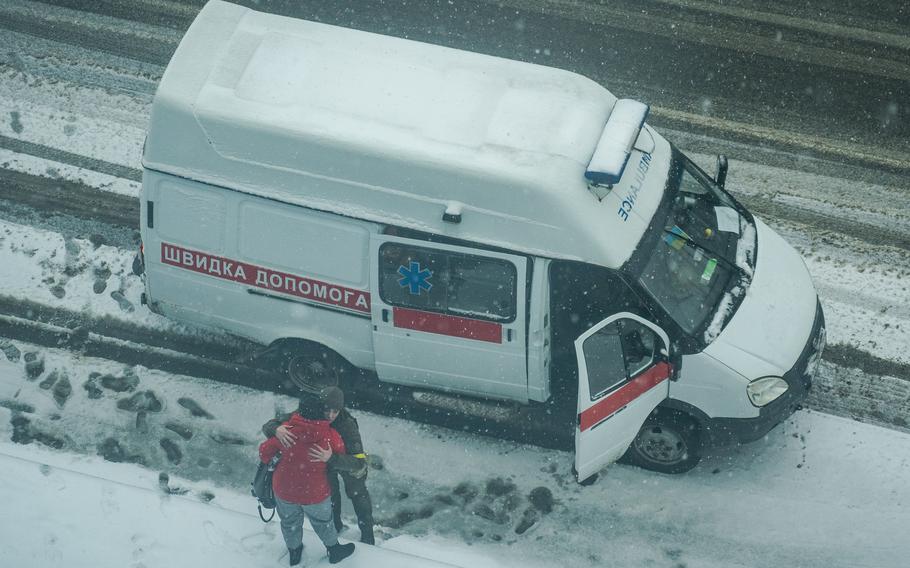 KHARKIV, Ukraine — The father of two preschoolers was driving them to their grandparents' house on the fertile plains of eastern Ukraine when, he said, a Russian convoy opened fire.

His car's tires blew out. The engine started smoking. And Victor's shoulder radiated with pain as a bullet lodged within. "I knew immediately that I was wounded," said the 40-year-old, who declined to give his last name.

On Saturday, he was being treated at a hospital for a punctured lung and a cracked rib, a civilian victim of Russia's invasion. But exactly how many Ukrainians have suffered a similar fate — or worse — was unknown, three days into a conflict that has continuously upended expectations.

Although images of smoldering apartment buildings and unsuspecting cyclists cut down by incoming fire have ricocheted across social media, the cumulative toll has been obscured by a bevy of factors, including the inability of international observers to do their work, a sprawling conflict zone in Europe's largest nation, a government in disarray as it fights for survival, and a steady drip of misinformation.

To those tasked with helping to protect the lives of noncombatants, the result has been a frustrating void at a time when civilian casualties are undoubtedly increasing.

"It's an incredibly worrying situation. We don't have any idea of the full scale of the consequences right now," said Mirella Hodeib, spokesperson for the International Committee of the Red Cross in Kyiv. "Only that they're rising exponentially."

Hodeib spoke from a bunker in Ukraine's capital city as combat continued unabated aboveground. The organization has a 600-member staff in Ukraine, Hodeib said. But nearly all have had to take shelter, with conditions too dangerous to effectively track how Ukrainians are faring while Russian troops advance and warplanes fire their missiles.

"A lot of the staff are themselves victims of this conflict," she said. "They've been living in the shelters with small children and no water or electricity for days and days now."

With conditions so grim, many international organizations that normally supply independent monitoring of conflict's costs — and, critically, document potential war crimes — have left the country entirely.

Although Ukraine's government remains standing, its grip is admittedly shaky: President Volodymyr Zelensky has said that regime change is Russia's aim, that he is being personally targeted and that his people will have to do everything in their power to prevent Kyiv from falling.

Ukraine's health minister, Viktor Liashko, said in a statement posted to Facebook Saturday that a total of 198 Ukrainians have been killed in the fighting, up from 137 a day earlier, with more than 1,000 wounded. Three children, he said, were among the dead.

But the statement was short on details, and it may undercount the true toll. One senior Western intelligence official, who spoke on the condition of anonymity, described Ukraine's tally as "awfully low."

"My sense is there are a lot more losses all around," he said.

The scale of suffering in just one relatively small community in eastern Ukraine gave a glimpse Saturday of the potential toll nationwide.

At the Okhtyrka Central District Hospital, situated in a city of under 50,000 people, an official said doctors had treated more than 200 patients — all of them civilians.

The hospital, he said, was experiencing a shortage of medicine and other supplies. In three days of war, at least 10 people had died. "Today we lost a little girl, 8 years old," he said.

Confusion and controversy over war's actual toll are an almost inevitable feature of conflict, with combatants using the shroud of mass violence — and the chaos that comes with it — to skew reality to suit their needs.

In this war, Russia has claimed that it is not targeting civilians, and only aiming for Ukraine's government and military. But Zelensky has insisted that's a lie, and the evidence suggests civilians have paid a heavy price.

Just how heavy is something that the U.S. military said Saturday it wasn't in position to know. The United States, like many Western nations, closed its embassy in Kyiv earlier this month as the threat of a Russian invasion intensified.

"It is very difficult for us to be 100 percent sure and certain of civilian casualties, even in operations that we conduct," said a senior U.S. defense official, who spoke on the condition of anonymity to discuss the department's analysis of the conflict. "And it is nearly impossible for us to have that certitude in an operation in which we are not participating."

The United Nations, too, has acknowledged the difficulty of establishing reliable counts or of documenting violations of the international laws of war.

The U.N.'s High Commissioner for Human Rights has 55 staffers on the ground in Ukraine looking for evidence of abuses. But, said spokesperson Ravina Shamdasani, their task has been complicated by the poor security situation. And not only that.

"What's really hampering their ability to corroborate information is the information war that has taken hold," she told reporters in Geneva. "We're getting many reports that are, at closer look, completely false. So they're being very careful."

The U.N. office said Saturday that it had documented 240 civilian casualties, including at least 64 dead, while acknowledging that is almost certainly an undercount.

Human Rights Watch, too, has had to tread cautiously. The organization has investigated numerous cases involving the suspected use of cluster munitions — banned due to their highly indiscriminate nature. The organization said it has proved one case, outside a hospital in the Donetsk region. The attack killed four people and injured 10.

Painstaking analysis of photos — including verifying their geolocation and reverse imaging to make sure they were new — plus interviews with witnesses helped to cement the facts, said Rachel Denber, HRW's deputy director for Europe and Central Asia.

"When you combine what people tell you firsthand and the images, that creates a pretty incontrovertible case," Denber said.

But Denber said the Ukraine conflict has presented serious difficulties for any organization trying to offer comprehensive monitoring. The organization has operated for years in Ukraine, investigating alleged abuses as fighting has simmered in the southeast.

The situation now is very different.

"One challenge is just the sheer scale of the hostilities. They're happening all over the country, nationwide, simultaneously," she said.

The Organization for Security and Cooperation in Europe had been providing detailed reports on violence in the southeastern Donbas region since conflict began there in 2014.

But the group announced Thursday it was evacuating its staff from Ukraine, with Secretary General Helga Schmid citing the need to protect "the safety of the dedicated women and men who serve as impartial eyes and ears of the international community."

Organizations that remain in Ukraine said their operations will be limited as long as cities are being shelled and staff members are put at serious risk while doing their jobs. Hodeib, of ICRC, said her organization is seeking guarantees from the combatants that humanitarian workers won't be targeted.

Those involved in trying to catalogue civilian deaths in conflicts that long predate the one in Ukraine say that achieving an accurate count is possible, even if the very nature of war makes it challenging.

They also say it's critically important in holding leaders to account and forcing militaries to be more disciplined in protecting civilian lives.

"We hear all the time about precision bombing. But civilians are still getting killed," said Hamit Dardagan, co-founder of the Iraq Body Count, which has been tracking civilian casualties since the 2003 U.S. invasion. "So something's not working. I don't know how you can say you're taking every measure to mitigate civilian harm but then you're not measuring civilian harm."

Of course, militaries aren't always trying to protect civilians. Atrocities in which civilians are deliberately targeted are a feature of war, as well, said Neta Crawford, who co-directs the Costs of War project.

Russia, she said, has a recent track record of indiscriminately killing civilians, including in Chechnya. And that may be part of the aim in Ukraine.

"It's intimidation," said Crawford, who chairs the political science department at Boston University. "What you're trying to do is show that the Ukrainian government cannot protect civilians, so go with the people who have the power on the ground."

But it was unclear if that strategy would succeed. Rather, the civilian deaths, Crawford said, may be strengthening Ukraine's resolve.

In a video released late Saturday, Kyiv Mayor Vitali Klitschko recited a litany of suffering among Ukrainians since Thursday, including a dead child and an apartment building whose top five floors were devastated by an alleged Russian missile.

He then urged Ukrainians to gird themselves for the fight ahead.

"This is barbarity and savagery," he said. "Russia is crushing our right to decide the future of our country and our children. We defend ourselves. Our army fights heroically to defend our land. This is a hard battle, but we have to survive."

Witte reported from Washington. The Washington Post's David L. Stern in Mukachevo, Ukraine, Karoun Demirjian and Ellen Nakashima in Washington, and Kostiantyn Khudov in Kyiv, Ukraine, contributed to this report.