'Weapons to anyone': Across Ukraine, militias form as Russian forces near 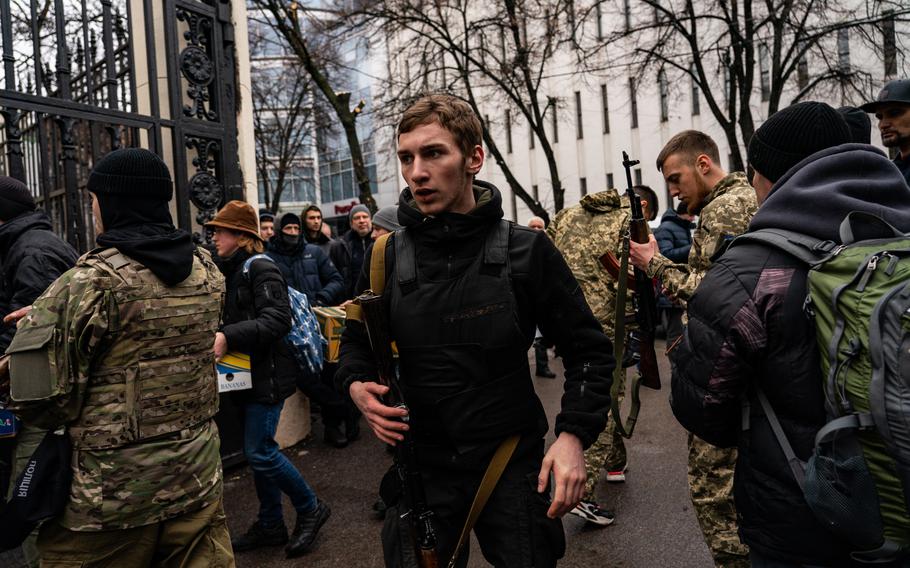 KHARKIV, Ukraine - In a downtown government office building, men and women in military fatigues carried rocket-propelled grenades through hallways lined with ornate white crown molding. Others had AK-47s with loaded clips slung over the shoulders. Sandbags rested along windows - protection in case of potential blasts.

One of the city's public buses pulled up to the building. There were hundreds of boxes of bullets inside.

This was the scene of the makeshift Ukrainian Territorial Defense headquarters in the eastern city of Kharkiv on Saturday morning - right around the time artillery strikes from the Russian military hit the area for a third straight day. Even as the smell of sulfur wafted through the streets, more than 100 people waited in line to join the civilian reserve force.

Ukraine's Territorial Defense, which is believed to have more than 130,000 volunteers, has been conducting weekend training sessions for months in preparation to help defend its turf from Russia. Now that the attack has started, Ukrainians across the country are mobilizing and turning to the Territorial Defense to arm them and send them into the fight. Anyone between 18 and 60 can join.

"What's there to be afraid of?" said 19-year-old Yevgeniy Belinkyi, who was waiting to enlist in Kharkiv. "When I'm sitting around, I'm scared. And here there's nothing to fear. Here, I know what's happening, and I hope my loved ones will be all right."

"I will make sure they are all right," he said.

It's the sort of civilian insurgency that Ukraine is counting on to help fend off a Russian military that has significantly more manpower and firepower. President Volodymyr Zelensky tweeted Thursday: "We will give weapons to anyone who wants to defend the country. Be ready to support Ukraine in the squares of our cities."

But arming civilians, many of whom have little training, risks exacerbating the violence in Ukraine's cities and potentially giving the Russian military more pretext to fire indiscriminately.

In Kyiv, a line stretched down the block at a police station to receive weapons and bullets that officials handed out after brief background checks. Interior Minister Denis Monastyrsky said in a video message that volunteers in Kyiv alone were given more than 25,000 automatic rifles, about 10 million bullets and rocket-propelled grenades and launchers.

Nearby, dozens of people huddled in a decades-old underground bunker to assemble molotov cocktails, or petrol bombs, carefully stuffing old wine and champagne bottles with packing material and flammable liquid before delivering them to groups of local defense forces nearby.

Across Kyiv, informal checkpoints and roadblocks have been installed. In some places, piles of tires or sandbags have been tossed in the roads to slow traffic. Messages on the Telegram app suggested citizens should remove road signs, so that Russian tanks might get lost.

Ukraine's Territorial Defense, now a division of the country's armed forces, has already been praised by Defense Minister Oleksii Reznikov for helping hold off the Russian assault on Kyiv since Friday. In the northeastern city of Sumy, 90 miles north of Kharkiv, a civilian defense force seized a Russian armored vehicle and interrogated the soldier in it, according to social media videos verified by The Washington Post.

At the Kharkiv headquarters, a man in camouflage and armed with an assault rifle, tried to organize the growing crowd of volunteers. He asked those with military service experience to get in line on the right and everyone else to line up on the left. He said he worked in an office until the start of the Russian invasion.

"I just want to offer free hands," one woman told him. "I can mop the floors."

He told her to line up on the left.

Men and women with military experience were ushered inside one group at a time. Many brought their own firearms with them. People edged around each other in the hallway. Some carried water or cartons of food while others carted in boxes of ammunition.

One group of men filed into the bed of a construction truck. The line of those waiting to sign up outside started cheering and wished them luck.

"They're off to the front," said Boris Redin, a pro-democracy activist who uses a blue-and-yellow tent on Kharkiv's main square as his headquarters.

"Everything that Russia always threatened us with is now happening," he said. "Now we're simply forced to fight back and defend ourselves. But we'll do it with fun and pleasure."

In the western city of Lviv - just 55 miles from the border with Poland and considered one of the safest areas in the country because of its distance from Russia - Oleksii Palyhi, a lanky 22-year-old with a heart tattooed on his cheekbone, had never imagined himself having anything to do with the military. His experience with weapons was taking potshots at bottles with an air rifle. After he dropped out of his university physics and astronomy course, a lung condition exempted him compulsory conscription.

"I was trying to avoid it," he said. But now things are different.

"We need to defend our motherland," he said.

Nearby, 70-year-old Orest Gaworsky, had gathered a group, writing down their names and phone numbers to submit. He was happy with his new comrades.

"There are no losers here," he said of the crowd. In 2015, he served as a civil volunteer in the eastern Ukrainian Donbas region, where the Ukrainian military has been engaged in an eight-year conflict with Russian-backed separatists. Gaworsky's vehicle was hit in an explosion there.

"We will shoot, we will make molotov cocktails, we will do everything," he added. "We'll fight them with pitchforks!"

Morris reported from Lviv, Ukraine, and O'Grady from Kyiv. The Washington Post's David L. Stern in Mukachevo, Ukraine, contributed to this report.