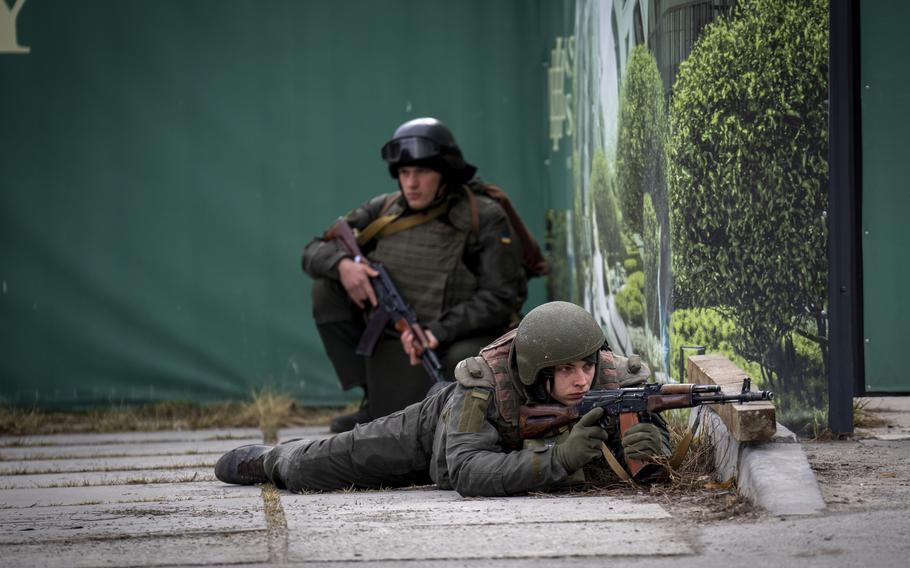 Ukrainian soldiers take positions in downtown Kyiv, Ukraine, Friday, Feb. 25, 2022. Russia pressed its invasion of Ukraine to the outskirts of the capital Friday after unleashing airstrikes on cities and military bases and sending in troops and tanks from three sides in an attack that could rewrite the global post-Cold War security order. (Emilio Morenatti/AP)

The Russian advance on Ukraine’s capital Kyiv has been slowed by stiffer resistance than U.S. intelligence officials believe the Kremlin anticipated, a top Pentagon official said Friday, even as The New York Times reported that some of Moscow’s troops had reached the northern fringe of the city.

The Russian march on Kyiv — where U.S. officials believe Moscow aims to “decapitate” Ukraine’s West-aligned government — “is going slower than the Russians would have had anticipated it going,” this senior defense official told reporters Friday on the condition of anonymity to provide the U.S. military’s latest observations about the fight. The new assessment, based largely on evidence the Pentagon did not immediately share, comes just hours after U.S. officials warned Russian forces could quickly seize the Ukrainian capital.

“They’re meeting more resistance than they expected,” the Pentagon official said. “They are not advancing as far or as fast as we believe they expected they would. A good indicator is that [Ukrainian] population centers have not been taken … [and] Russia has yet to achieve air superiority over Ukraine.”

The New York Times, which has journalists in the capital, said some Russian units had reached a northern district of Kyiv on Friday, as missiles hammered the city. It was unclear how many Russian troops had reached the area. The newspaper quoted the chief of Britain’s chief of defense intelligence, as saying the Russians were moving along two axes to try to encircle Kyiv and topple the Ukrainian government.

Ukraine’s air and missile defense systems were still working Friday, although they had been damaged in Russian strikes, the official added. Russia had launched at least 200 cruise and short-range ballistic missiles into Ukraine by Friday, striking primarily at military targets including the air and missile defense systems, aircraft and Ukrainian bases.

Nonetheless, the official said, Ukraine’s “command and control is intact,” and its forces were continuing to fight.

The Pentagon and other Western officials have said fighting has been heavy in parts of Ukraine since Russia launched a full-scale invasion of the country Thursday morning. President Joe Biden — who met virtually with other NATO heads of state Friday morning to discuss the alliance’s response — on Thursday called the move an unprovoked “brutal assault” on a sovereign nation, imposed new sanctions of Russian institutions and elites, and ordered some 7,000 American forces to deploy on short-notice to Europe to bolster NATO defenses.

Those troops — including the 3,800 soldiers of Fort Stewart, Ga.’s 1st Armored Brigade Combat Team, 3rd Infantry Division — had not yet departed for Europe as of Friday, the official said. However, American F-35 advanced fighters arrived in Baltic nations Estonia, Latvia and Lithuania and had begun flying missions along their borders by Friday.

In a statement after the emergency meeting, NATO said it would make further deployments to its eastern flank “to ensure strong and credible deterrence and defense across the Alliance, now and in the future.”

Meanwhile, the Pentagon was working Friday to find new ways to support Ukraine’s armed forces, from outside the country, the Pentagon official said. Biden has vowed U.S. troops will not fight Russian forces on Ukrainian soil. The president warned Thursday that Russian President Vladimir Putin may be intent on moving forces beyond Ukraine, and he warned an attack on NATO territory would be met with military power from the U.S. and the entire alliance.

The Pentagon has observed Russia move only about one-third of the more than 150,000-troop strong military power it massed along Ukraine’s border in recent months. The official cautioned that he was not going to make predictions about Putin’s next moves or if Russian forces would still be able to capture Kyiv in the coming days.

“They have a lot of power at their disposal,” the official said, adding the Russian’s appeared to be launching a new amphibious assault in the country’s east, west of the Sea of Azov that could include “thousands of naval infantry” troops meant to move toward the Ukrainian seaport city Mariupol and into the Donbas region.

The Pentagon continues to believe the Russian military has only begun “the initial phases” of its operations in Ukraine and could further escalate the fighting.

Ukrainian President Volodymyr Zelensky said in a statement that at least 137 Ukrainians — including military troops and civilians — had died in the fighting with Russia on Thursday and more than 300 others had been wounded. He claimed many more Russian troops had been killed in the clashes.

The Pentagon declined to comment on death tolls for either side on Friday. The official said if Russian forces continue to fight, the battle will remain bloody, especially considering the resistance Ukrainians have put up since the invasion.

“I would say that from our perspective, it’s both gut-wrenching and inspiring — what we have seen in the last 24 hours,” the official said. Which is Ukrainians being willing to fight for their country and to do so bravely.”