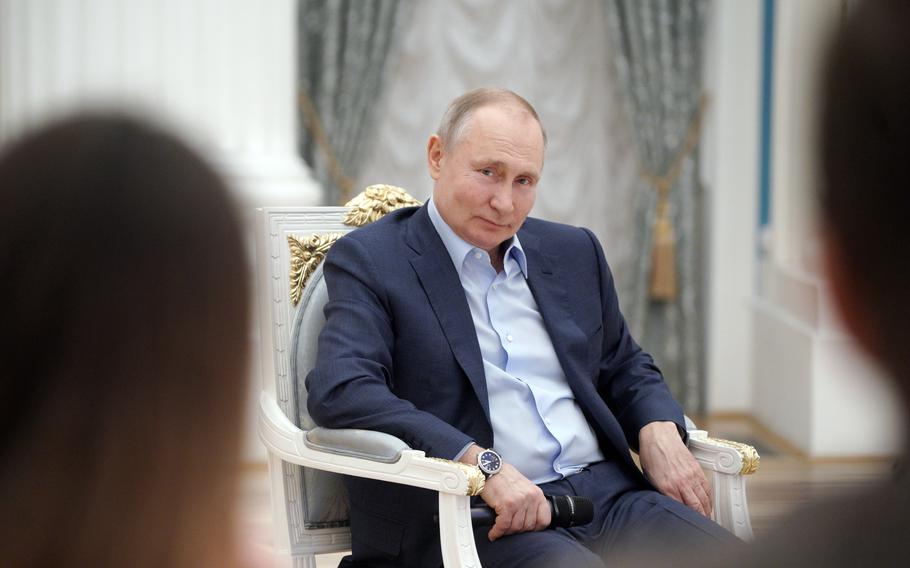 SINGAPORE (Tribune News Service) — With no appetite for military confrontation, the U.S. and its allies are relying on sweeping economic sanctions to persuade Russian President Vladimir Putin to pull out of Ukraine.

But the effectiveness of those measures are anything but certain, relying on a host of factors that includes how much China is willing to come to Moscow’s aid.

Placing a stranglehold on Russia’s $1.5 trillion economy will not be easy, especially since it began trying to buffer itself from international sanctions after it annexed Crimea from Ukraine in 2014.

Russia has sidelined growth to pare down its debt and built up its reserves of foreign currency and gold — so much so that it reached record levels this year at over $640 billion.

The reserves help soften the financial blowback of Russia’s invasion. On Thursday, the Russian central bank pumped liquidity into the country’s banking system and sold foreign currency for the first time in years to prop up the ruble, which plunged to its weakest level since 2016.

As it stands, those measures are highly unlikely to inflict enough pain on Moscow to trigger a reversal in Ukraine, analysts said, noting that any sanctions imposed now are likely to be too little, too late.

“Sanctions in this case, where Putin was clearly driven to expand the Russian empire, would have to be truly draconian to have had a chance of success,” said Gary Hufbauer, a sanctions expert and a senior fellow at the Peterson Institute for International Economics.

Hufbauer said sanctions achieve their goals in only a small percentage of cases, and are more likely to succeed when they’re targeted at specific economic goals or countries with unstable political regimes. Hufbauer puts the overall success rate at around 25%, mostly in minor cases of international conflict.

The effects of harsh sanctions tend to fall disproportionately on the populace of a country, as opposed to its political and financial elite, to the extent that Hufbauer likened them to economic carpet bombing, and noted that economy-wide sanctions have sometimes had the unintended effect of consolidating power in the existing regime. He cited the entrenched leadership of the Castro and Kim families in Cuba and North Korea, respectively.

At the same time, the European Union is seeking to change the personal calculus in regard to Putin and his foreign minister, Sergey Lavrov. In a tweet Friday, Latvian Foreign Minister Edgard Rinkevics announced that the EU would freeze both men’s assets, along with other sanctions against Russia to try to force a halt of its invasion, the Associated Press reported.

Biden has said the U.S. is also prepared to issue more sanctions. To sting, experts say, they would have to target Russia’s chief industry: energy. Oil and gas account for nearly 60% of Russia’s exports and about one-fifth of its economic output.

But Washington and its allies have been reluctant to focus on that sector because the European Union relies on Russia for more than 40% of its natural gas supplies, and the Biden administration is under growing pressure to tackle rising energy costs against stifling inflation. The attack on Ukraine has already sent Brent crude oil, the global benchmark, to its highest level since 2014 at $105 a barrel — enriching Russia’s coffers.

Those rising prices are one reason the White House declined to back calls to block Russia from the global financial messaging system used by thousands of banks known as SWIFT. The administration said doing so could be so disruptive to clearing transfers of funds that energy costs would soar further.

If Russia were barred from the global banking system, it could take a page from Iran and North Korea and try relying on cryptocurrency to settle payments, though it would be untested on an economy of Russia’s scale. Eastern Europe — Ukraine specifically — is already a hotbed of illicit cryptocurrency activity, according to Chainalysis, a Singapore-based blockchain research firm.

Moscow announced last November that it would release a prototype of a digital ruble by this year, a currency that could reduce Russia’s exposure to the dollar and international sanctions.

Current sanctions against Russia could take months, if not years, to bite. Their severity could be weakened by a country like China, which has steadily increased trade with Russia. Beijing could offer to purchase more oil and extend loans through its state-owned banks, but analysts are doubtful China will breach sanctions and risk alienating itself from the West.

“China’s leadership is trying to straddle a geopolitical divide,” Mark Williams, chief Asia economist for research firm Capital Economics, wrote in a note to clients. “Russia is an ally, but being seen to take its side would hasten China’s decoupling from the West. Most likely, China will support Russia financially and through trade as much as any Western sanctions allow. Small companies and banks may breach sanctions, but larger firms and the government won’t risk a further rupture in relations with the West.”

That doesn’t mean China won’t continue doing business with Russia. It craves its oil and gas and recently struck a deal to import wheat. But China is unlikely to do Russia any favors, opting instead to capitalize on its ally’s difficult position.

“China doesn’t provide charity, even to its strategic partners,” said Elizabeth Wishnick, a senior research scientist at the Center for Naval Analysis, a U.S. Navy think tank. “I would expect China to continue to be hard-nosed about the investments it will make in Russia.”