Russian threat is forcing a rewrite of US defense plans 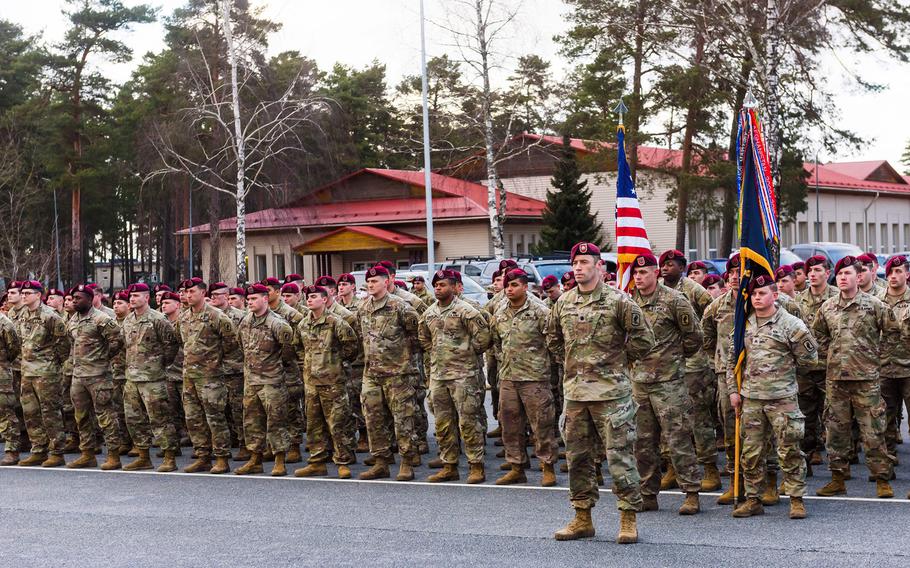 Soldiers of an airborne brigade of the U.S. Army stand at the Adazi Military Base of the Latvian armed forces in Adazi, Latvia, on Friday, Feb. 25, 2022, upon arrival for their mission to strengthen the NATO enhanced Forward Presence multinational battlegroup. (GINTS IVUSKANS/AFP)

Russian President Vladimir Putin’s attack is still underway, and its duration and dynamics remain in flux. The United States and its allies say they have no plans to get directly involved militarily in Ukraine, which is not a member of NATO.

Even if NATO stays out of the combat in Ukraine, if Putin has his eyes set on taking back any or all of the other former Soviet states, then the world changed even more dramatically this week than most people realize. No one knows for sure if Putin has such plans. But his track record makes it imperative that America and NATO assume the worst, a growing chorus of expert observers said this week.

The upshot is that U.S. defense budgets and America’s military posture will change, the analysts said. Pentagon spending in fiscal 2022, fiscal 2023 and beyond will probably grow more than it otherwise would, an uptick that could become apparent in the next couple of weeks. Within the higher topline, more money will go toward Eastern Europe: more weapons and training for NATO allies there, and more of a U.S. military presence. Whether that means slightly less of a U.S. military focus on the Indo-Pacific region is yet to be determined. This week’s events may also precipitate a greater role for the U.S. Army in future Pentagon plans and programs.

Biden administration officials were getting close this month to finalizing a new National Defense Strategy and National Security Strategy. Then Putin invaded Ukraine on Feb. 24. As a result, those documents — and the budgets that are supposed to follow from them — may be undergoing last-second changes.

Putin’s attack “definitely raises the importance of countering and deterring Russia in overall U.S. national security strategy,” said Todd Harrison, a defense budget expert with the Center for Strategic and International Studies, in an email. “I imagine there is some rewriting going on for the NSS and NDS right now to reflect that reality.”

Putin in 2005 called the dissolution of the Soviet Union the “greatest geopolitical catastrophe” of the 20th century. In a speech this week, he suggested Ukraine exists on historically Russian land. In between, he has seized at least part of country after country that was formerly part of the Soviet empire.

President Joe Biden and members of Congress from both parties said this week that Putin, in fact, wants to recreate the Soviet Union by force. If that’s true, then the invasion of Ukraine is not Putin’s last move toward that end. In his crosshairs going forward, then, could be an arc of nations to Russia’s west — from the Baltic states down to Georgia.

Putin “has much larger ambitions than Ukraine,” Biden said on Feb. 24. “He wants to, in fact, reestablish the former Soviet Union. That’s what this is about.”

Likewise, the top Republican on the House Intelligence Committee, Michael R. Turner of Ohio, told a think tank audience last week that “the remainder of the nations that used to be part of the Soviet Union, those in the Warsaw Pact, are now at risk.”

And Sen. Chris Coons, D-Del., chairman of the State and Foreign Operations Appropriations Subcommittee and a member of the Foreign Relations Committee, told reporters on Friday that “Putin’s aggression will not stop with Ukraine” and “there are other former Soviet republics that he will consider next, whether Moldova, Armenia or Georgia.”

Coons, who just returned from Eastern Europe, said Putin’s stated goal “is to reassemble as much of the Soviet Union as he can.”

Barry Pavel, a former top official in the Pentagon and National Security Council, said in an interview that the world entered a more dangerous period of history several years ago, and this week’s events cast it in bold relief.

Pavel, now a top analyst with the Atlantic Council, cited Putin’s military and political incursions over more than a decade in all or part of Georgia, Crimea, Ukraine’s Donbass region, Moldova, Belarus and now the entirety of Ukraine.

“Is there a trend here we should step back and take a look at?” he asked sarcastically. “I do not have any confidence that we understand the limits of Putin’s ambitions.”

Andrea Kendall-Taylor, a former top Russia expert at the Office of the Director of National Intelligence, believes Putin is focused for now on Ukraine, not other countries, but she said there is still a risk that his position could change — depending on how much the West pushes back.

“If this response is not sufficiently strong, that could in time lead Putin to overestimate his capabilities, and the cycle could continue if we don’t put an end to the cycle now,” Kendall-Taylor said Friday at an online forum by the Center for a New American Security, where she is now a senior fellow.

Even if Ukraine is the only country Russia invades for years to come and even if NATO takes pains to avoid combat in Ukraine, there is still a risk that nearby NATO allies, if not the United States, could soon be ensnared in the fight, some experts say.

If, for example, a country such as Poland were to harbor those supplying anti-Russian insurgents in Ukraine, then Poland, a NATO member, could become a Russian target and draw in other NATO nations, Kendall-Taylor said. And the effects of Russian cyberattacks in Ukraine could be felt in neighboring NATO nations, she added.

“The spillover question is a real one,” she said.

The Pentagon and allied militaries had already started to prepare in recent years for this growing threat. The United States has, for example, appropriated nearly $27 billion since fiscal 2015 on the European Deterrence Initiative, helping to arm and train European allies and strengthening U.S. forces in the region. The Pentagon has sought another $3.7 billion for fiscal 2022. American military construction funds have been spent upgrading runways and other facilities in countries such as Estonia.

And this week, the Pentagon moved thousands of troops who had been in the United States or Western Europe to the territory of Eastern European NATO allies such as Poland. Alongside the personnel have come American armored vehicles, fighter jets, attack helicopters and other weapons. Supplies of so-called lethal defensive weaponry to Ukraine have also grown in recent years.

More such support is coming, experts predict. Lawmakers are still negotiating the fiscal 2022 defense spending bill and Biden’s fiscal 2023 request is in the final stages of development. Like the strategy documents, revisions are no doubt being made in the budgets, at least on the margins.

“While before the strategy seemed to be focused squarely on ‘China, China, China,’ it is now going to read something more like ‘China, Russia, China,'” Harrison said.

The forthcoming budgets will include more weapons and training for NATO allies in Eastern Europe and might include more U.S. forces stationed either permanently or, more likely, on a rotational basis in the region.

The training will focus on Russian operational tactics displayed in Ukraine, Harrison predicted.

“I think we will see accelerated efforts to sell and transfer higher-end equipment to our NATO allies on the eastern front, particularly when it comes to advanced missiles and munitions,” Harrison said. “I would expect to see more anti-tank, anti-ship, and anti-aircraft missiles, as well as air and missile defense systems.”

Pavel, for his part, predicted more of an offensive bent to the weapons that NATO stations on Russia’s periphery, such as bombers and long-range strike assets.

Putin “is going to get a lot more NATO close to his borders than he’s ever seen before,” Pavel said.

Many experts have predicted that a growing focus in the last few years on U.S. defense planning for possible conflict with China in the Indo-Pacific region spelled budget trouble for the Army, which is less likely to be a player in such a contest than the Air Force and Navy. The Army was also seen as bound to shrink in size so that money that would have paid the salaries and benefits of soldiers could go instead to developing cutting edge weapons for a high-end China fight.

That will change somewhat now, Harrison and Pavel said, and the only question appears to be: how much?

“Europe is a very Army-heavy requirement, and there is nowhere else on Earth the Army is required in such a significant way,” Pavel said. “The U.S. Army needs to be focused on Europe as priority number one, two and three.”

More for the Pentagon

Perhaps the most lasting effect on Pentagon budgets will be political, Harrison predicts. As a result of what is shaping up as the biggest war in Europe since World War II, support in Congress will grow for a higher Pentagon budget, he said. That may be seen in the coming weeks as the fiscal 2022 appropriations are enacted and the fiscal 2023 request is submitted.

“The increased costs of arms transfers to Ukraine and the increased presence in Eastern Europe is relatively small at this point, compared to the overall DOD budget,” Harrison said. “But, politically, this is likely to reinvigorate defense hawks in Congress to plus-up the defense budget so that the U.S. military can focus on countering both Russia and China simultaneously.”

That effect was in evidence on Feb. 24, when Senate Minority Leader Mitch McConnell, R-Ky., released a statement on the Ukraine crisis.

“As I’ve said before, the United States and NATO must redouble our material support for Ukraine’s resistance, further shore up our allies, get serious about energy independence, and invest in the capabilities needed for long-term military competition with Russia and China,” McConnell said. “Here in Congress, upcoming defense spending measures will provide an opportunity to lead by example.”