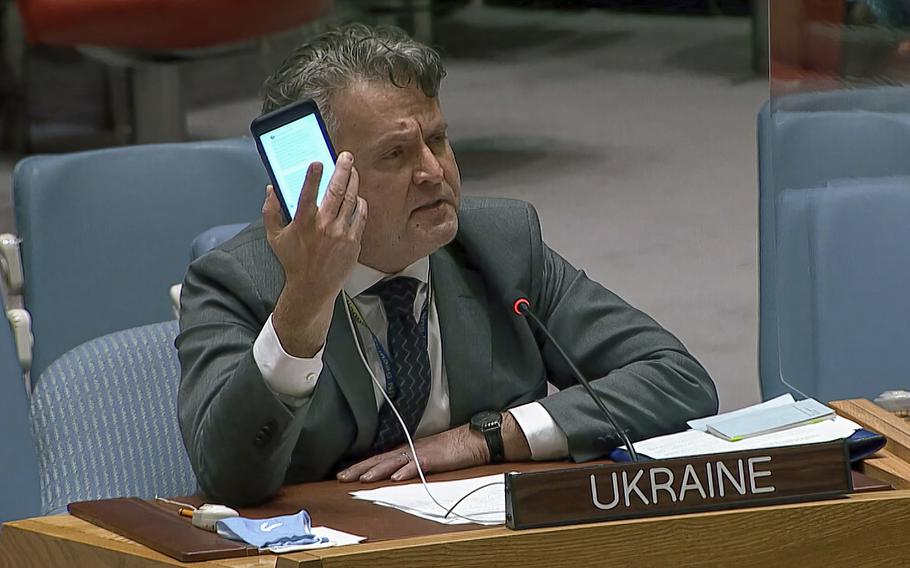 In this image from UNTV video, Ukraine's Ambassador to the United Nations Sergiy Kyslytsya, holds up a phone as he speaks an emergency meeting of the U.N. Security Council Wednesday, Feb. 23, 2022, at U.N. headquarters. (United Nations TV via AP)

UNITED NATIONS — The emergency U.N. Security Council meeting was meant as an eleventh hour effort to dissuade Russia from sending troops into Ukraine. But the message became moot even as it was being delivered.

While diplomats at U.N. headquarters were making pleas for Russia to back off — "Give peace a chance," Secretary-General Antonio Guterres implored — Russian President Vladimir Putin went on television in his homeland to announce a military operation that he said was intended to protect civilians in Ukraine.

Putin warned other countries that any effort to interfere with the Russian operation would lead to "consequences they have never seen."

The council, where Russia holds the rotating presidency this month, gathered Wednesday night hours after Russia said rebels in eastern Ukraine had asked Moscow for military assistance. Fears that Russia was laying the groundwork for war bore out about a half hour later.

"It's too late, my dear colleagues, to speak about de-escalation," Ukrainian Ambassador Sergiy Kyslytsya told the council. "I call on every one of you to do everything possible to stop the war."

In a spontaneous exchange not often seen in the council chamber, Kyslytsya challenged his Russian counterpart to say that his country wasn't at that very moment bombing and shelling Ukraine or moving troops into it.

"You have a smartphone. You can call" officials in Moscow, Kyslytsya said.

"I have already said all I know at this point," Russian Ambassador Vassily Nebenzia responded.

He added that he didn't plan to wake up Russia's foreign minister — and said that what was happening was not a war but a "special military operation."

Kyslytsya dismissed that description outside the meeting as "lunatic sematics."

At the council's second emergency meeting this week on Ukraine, members found themselves delivering prepared speeches that were instantly outdated. Some ultimately reacted in a second round of hastily added remarks.

"At the exact time as we are gathered in the council seeking peace, Putin delivered a message of war, in total disdain for the responsibility of this council," U.S. Ambassador Linda Thomas-Greenfield said.

She added that a draft resolution would be circulated to the council Thursday.

Earlier Wednesday, diplomats from dozens of countries took the floor at the U.N. General Assembly to deplore Russia's actions toward Ukraine and plead for dialogue, while Russia and ally Syria defended Moscow's moves.

Echoing a narrative being broadcast to Russians at home, Nebenzia portrayed his country as responding to the plight of beleaguered people in the breakaway areas. Russia claims Ukraine is engaging in violence and oppression, which Ukraine denies.

"The root of today's crisis around Ukraine is the actions of Ukraine itself," he told the council Wednesday.

Ukrainian Foreign Minister Dmytro Kuleba implored countries to use tough economic sanctions, strong messages and "active diplomacy" to get Russia to back off. A lackluster response would jeopardize not only Ukraine but the concept of international law and global security, he warned.

Meeting a day after Western powers and some other countries imposed new sanctions on Russia, the 193-member General Assembly didn't take any collective action. But the comments from nearly 70 nations, with more scheduled for Monday, represented the broadest forum of global sentiment since the crisis dramatically escalated this week.

Russia seized Ukraine's Crimea Peninsula in 2014, and pro-Russia rebels have since been fighting Ukrainian forces in the eastern areas of Donetsk and Luhansk. More than 14,000 people have been killed in the conflict.

After weeks of rising tension as Moscow massed over 150,000 troops on Ukraine's borders, Putin on Monday recognized the two regions' independence and ordered Russian forces there for what he called "peacekeeping."

Guterres disputed that, saying the troops were entering another country without its consent.

By the end of the night Wednesday, as explosions were heard in Kyiv and other cities across Ukraine, Guterres' appeal to "give peace a chance" had become a darker and more desperate plea.