Russia is aiming for a rapid destruction of Ukraine’s Forces 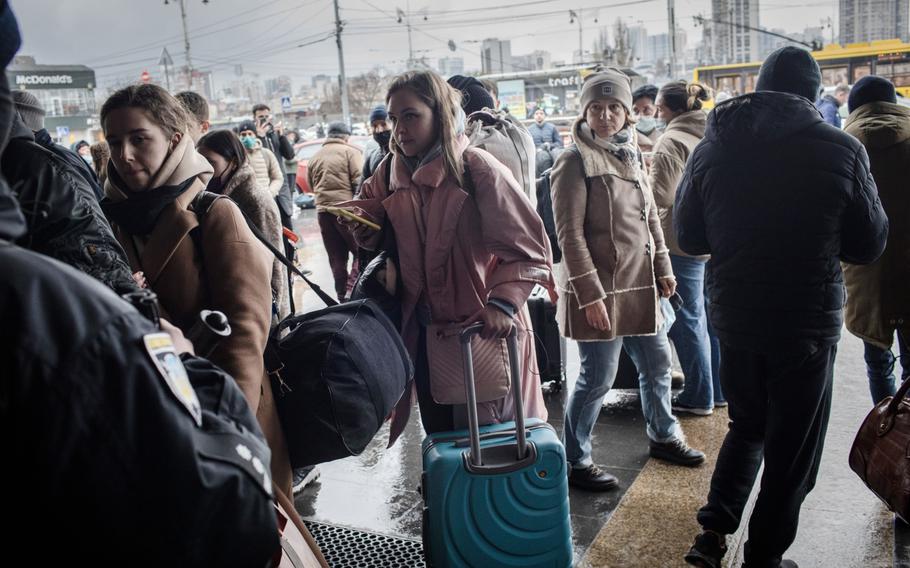 Residents wait to leave the capital as trains are delayed or cancelled at Kyiv-Pasazhyrskyi railway station in Kyiv, Ukraine, on Feb. 24, 2022. (Erin Trieb/Bloomberg)

Russia’s invasion of Ukraine is following a course many military analysts had predicted, with a barrage of missile attacks to destroy Ukraine’s air force and air defenses quickly followed by a massive land campaign aimed at crushing armed resistance.

Events on the ground unfolded rapidly on Thursday and, while the situation remains fluid, it appears that Russian President Vladimir Putin has opted for a campaign aimed at achieving regime change, rather than a more limited takeover of the separatist Donbas territories he recognized as independent on Tuesday.

Ukraine’s State Border Guard Service said its personnel came under attack at 5 a.m. local time in five provinces ranged around the country’s north eastern borders, as well as through Donbas and occupied Crimea, to the south.

Russian tanks were reported to have reached the outskirts of Ukraine’s second city, Kharkiv, by mid morning, and to be fighting in the Kherson region just north of Crimea. By early afternoon, CNN showed Russian troops apparently in control of Hostomel airport, outside the capital Kyiv, following an air assault.

Mykhaylo Podolyak, adviser to Ukraine’s President Volodymyr Zelenskiy, said Russian forces may be trying to secure the base as a bridgehead for an operation to decapitate the government. “Landing of airborne troops is possible. There could be an attempt to enter government’s bloc,” Podolyak said. “One of the goals is to remove top authorities.”

That idea was supported by Vyacheslav Nikonov, first deputy chairman of the Russian State Duma’s International Affairs Committee, who said Russia aims to install a new, Moscow-friendly administration. It isn’t clear how a government imposed by Russia would be able to overcome popular resistance.

In the east, the Facebook page for Ukraine’s war effort reported a fierce battle with Russian tanks pressing down toward the rear of Ukrainian front lines fighting separatists in Luhansk province.

In an unequal battle -- Russia spends more than 10 times as much on defense -- Ukraine said it had shot down Russian aircraft and destroyed tanks. Russia’s Defense Ministry said it had destroyed 74 military facilities, including 11 air fields, 3 command posts, a naval base and 18 radar stations for anti-aircraft batteries.

What happens next, according to the Moscow-based defense analyst Pavel Felgenhauer, is best understood from Putin’s stated goal to “demilitarize” rather than occupy Ukraine, a nation of 41 million that has a territorial expanse similar to that of France.

“That means the Ukrainian armed forces should be totally disbanded, weapons liquidated and Ukraine turned into a buffer zone where Russia can do what it wants without any ability of Ukraine to resist,” said Felgenhauer, a veteran military analyst with the Jamestown Foundation, a U.S. think tank. “Putin was very specific, territory issues come second.”

That, in turn, requires targeting the Ukrainian armed forces that are mostly in Donbas, where Russian forces are likely to engage from the front and surround them, Felgenhauer said. Russia cannot afford a drawn out engagement, but rather “it will be a Blitz, a Blitzkrieg,” he said.

That’s a view shared by Ben Hodges, a retired U.S. General and former commander of the U.S. Army in Europe. Taking Kyiv, a city of 2.8 million, by force would risk months of urban warfare and require all the manpower Russia has available. In U.S. experience, he said, taking one hotel-size building requires a battalion, or 700-800 men.

According to the U.S., Russia had built up a force around Ukraine numbering between 150,000 and 200,000 troops by the time Putin gave the order to move. Not all have yet been deployed.

There’s little doubt Putin has his eyes on more than just the separatist territories, according to Mathieu Boulegue, a specialist in Eurasian security and defense at the London think tank Chatham House.

In Putin’s pre-war address to the nation, said Boulegue, he spent less time talking about stopping further NATO expansion than what he saw as the illegitimacy of Ukraine as a state, cobbled together -- in his account -- by a series of arbitrary Soviet-era decisions.

“It was the way he was talking about Ukraine almost like it was a Lego set,” Boulegue. “He was making the case to Russians that by going in he would be righting a historical wrong.”