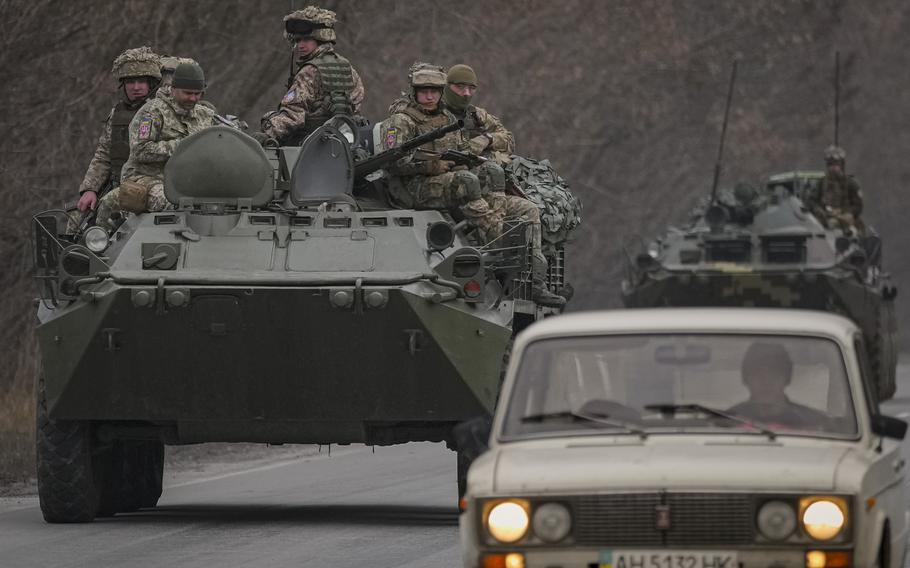 Ukrainian servicemen sit atop armored personnel carriers driving on a road in the Donetsk region, eastern Ukraine, Thursday, Feb. 24, 2022. Russian President Vladimir Putin on Thursday announced a military operation in Ukraine and warned other countries that any attempt to interfere with the Russian action would lead to “consequences you have never seen.” (Vadim Ghirda/AP)

For weeks, Russian officials and commentators had strongly denied that the country was planning an attack on neighboring Ukraine. At points, they ridiculed such claims from the United States and its allies as “hysteria” and “fairy tales.”

That turned out not to be true.

In the early hours of Thursday, Russia launched a broad attack on Ukraine, with multiple reports of explosions in cities across much of the country, including the capital, Kyiv. In a statement, President Joe Biden called the multipronged assault “a premeditated war.”

It is not clear if the string of denials from Russia was deliberate disinformation or reflected the closed-off decision-making of Russian President Vladimir Putin. Some independent experts in Moscow had also downplayed the chance of a full-out Russian assault on Ukraine, instead suggesting that the Kremlin was bluffing to gain concessions.

Western officials have expressed concern about the risk of conflict since late last year, citing an unusual buildup of Russian forces and military machinery near the border with Ukraine. Kremlin spokesman Dmitry Peskov dismissed the idea, telling reporters that “Russia doesn’t threaten anyone” and that it was allowed to move troops within its borders.

Any suggestion that Russia was planning to invade Ukraine was a “hollow and unfounded attempt to incite tensions,” Peskov said.

On Dec. 3, The Washington Post published a report that said U.S. officials believed “the Kremlin is planning a multi-front offensive” on Ukraine “as soon as early next year involving up to 175,000 troops.”

Russian officials denied there was anything unusual about the buildup, with Foreign Ministry spokeswoman Maria Zakharova suggesting that there had been “provocative actions near Russia’s borders accompanied by accusatory rhetoric” in remarks to a Russian newspaper.

“The [United] States is conducting a special operation to aggravate the situation around Ukraine while shifting the responsibility onto Russia,” Zakharova said, according to the Kommerstan newspaper.

Shortly afterward, when German newspaper Bild published a map that claimed to show a possible plan for a Russian attack on Ukraine, Zakharova claimed in a YouTube interview that Western outlets had “crossed all possible lines of human, genuine morality and ethics” by suggesting an attack was imminent.

Leonid Slutsky, a Russian member of parliament and chairman of the Russian State Duma Committee on Foreign Affairs, wrote on his Telegram account that Western media outlets were publishing “fairy tales about Russia’s plans to attack Ukraine.”

“The flywheel of pumping up the anti-Russian hysteria is at full speed,” Slutsky wrote.

As the Russian military buildup continued in January, U.S. officials warned that Russia was likely to plan a “false flag” operation that would give in a pretext to invade Ukraine. At a Jan. 17 news conference, Russian Foreign Minister Sergey Lavrov dismissed talk of the “so-called Russian invasion of Ukraine.”

American officials were “spreading complete disinformation that we are preparing a provocation all but attacking the Russian-speaking population in Donbas in order to obtain the pretext for that very invasion,” Lavrov told reporters in Moscow.

On Jan. 23, the British government accused Russia of organizing a plot to install a pro-Moscow government in Ukraine, citing intelligence reports. In response, the Russian Foreign Ministry released a statement that called the accusations misinformation.

“We call on the British Foreign Office to stop provocative activities, stop spreading nonsense and focus on studying the history of the Tatar-Mongol yoke,” a Foreign Ministry representative told news Russian agency Tass.

After Biden spoke with Putin about the situation on Feb. 12, Kremlin Foreign Affairs adviser Yuri Ushakov rejected claims that an attack was imminent. “Hysteria has reached its peak,” Ushakov told reporters.

Other Russian officials began mocking reports of an imminent invasion. “Wars in Europe rarely start on a Wednesday,” Lavrov said after Feb. 16, a date that had been mooted as a potential invasion, came and went.

In a Feb. 16 Facebook post, Foreign Ministry spokeswoman Zakharova asked the “mass media of disinformation” in the West for a favor: Could they “reveal the schedule of our ‘invasions’ for the upcoming year? I want to plan a vacation.”

On Sunday, Russian ambassador to the United States Anatoly Antonov added to the denial, telling CBS News that “Russian troops are on sovereign Russian territory,” where they “don’t threaten anyone.”

“There is no invasion. There [are] no such plans,” Antonov said.

In the early hours of Thursday, Putin gave a televised address that said Russia was beginning a military operation for the “demilitarization and denazification” of eastern Ukraine. Explosions were heard in major Ukrainian cities, with Ukrainian Foreign Affairs Minister Dmytro Kuleba tweeting that Russia had “launched a full-scale invasion of Ukraine.”

U.S. officials have previously estimated that a major assault would leave as many as 50,000 civilians dead or wounded.