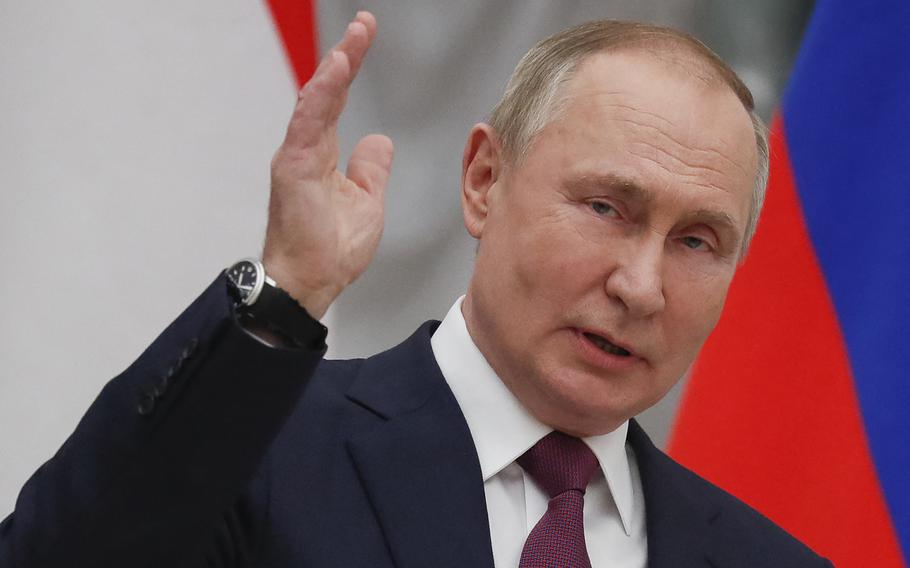 Russian President Vladimir Putin during a news conference at the Kremlin in Moscow on Feb. 1, 2022. (Yuri Kochetkov, Pool, AFP via Getty Images/TNS)

Russia’s mounting aggression against Ukraine is creating a new and potentially prolonged period of uncertainty about global oil and gas supplies.

A long conflict could send crude oil prices higher, taking the price of gasoline with them. It could also create more uncertain natural gas supplies for Europe, which relies on Russian exports to heat and power many of its homes and factories.

Russia’s ability to continue serving as one of the world’s largest oil and gas suppliers will depend on several factors: whether Western sanctions disrupt Russian exports; whether conflict damages Russian export pipelines traveling through Ukraine; and whether Russia resorts to curbing its exports to punish the West.

For now, analysts said they don’t see a high likelihood of serious supply disruptions. But fears of widening conflict pushed prices higher Tuesday, with crude oil climbing 2% to almost $93 a barrel and European natural-gas prices rising more than 10% to 80 euros ($90.65) per megawatt-hour.

The most immediate fallout on Tuesday came from Germany’s decision to suspend authorization of Nord Stream 2, a still inactive natural-gas pipeline from Russia that was designed to significantly boost Russian exports to Europe.

Because that pipeline isn’t already delivering gas, the suspension of its commissioning won’t lower immediate supplies to Europe. Germany’s move will likely anger Moscow, though what, if anything, Russia will do about that is uncertain.

In a tweet Tuesday, Dmitry Medvedev, deputy chairman of Russia’s security council, warned that Germany’s decision means it will “very soon” be paying more than double for natural gas. He did not elaborate.

Bob McNally, a longtime energy consultant and former adviser in the George W. Bush White House, said crude oil prices could spike above $100 a barrel in the short term but would likely reverse unless there is a severe supply disruption.

“I do expect now we’re probably headed over $100 a barrel just because now I think folks are seeing no one is taking a diplomatic off-ramp,” McNally said. But he added: “My view remains that the risk of an actual oil supply interruption is fairly low.”

One risk for the West could come if Russia decides to retaliate against Western sanctions by carrying out cyber attacks against U.S. or European pipelines, McNally said. The United States accused Russian hackers of mounting last year’s attack on the Colonial pipeline, which led to panic buying of gasoline on the East Coast.