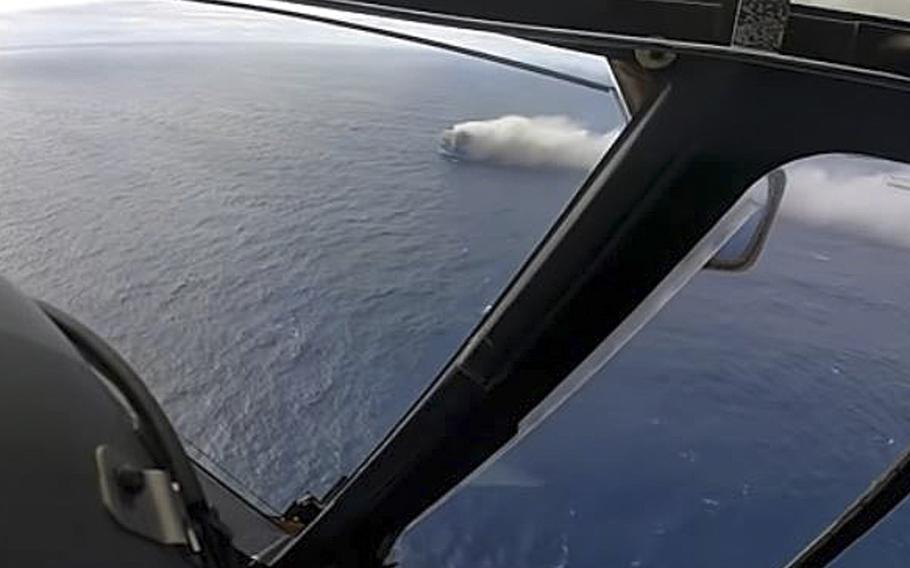 A screen grab from a video posted Feb. 17, 2022, shows a burning cargo ship in the distance. On Feb. 16, 22 crew members from the merchant ship Felicity Ace were rescued after a fire broke out in the vessel’s cargo hold. (YouTube/Portugese Air Force)

A huge cargo ship carrying thousands of luxury vehicles from Germany to the United States, including 1,100 Porsches, caught fire this week, forcing all 22 crew members to abandon ship and leave the vessel adrift in the middle of the Atlantic Ocean.

A fire broke out Wednesday morning on the Felicity Ace, a ship about 650 feet long, near Portugal's Azores Islands, according to the Portuguese navy. The ship had departed from Emden, Germany, on Feb. 10 and was scheduled to complete its 13-day trip and arrive in Davisville, R.I., next week, according to VesselFinder, a ship tracking website. The Volkswagen Group estimated that nearly 4,000 cars were aboard the Felicity Ace, according to the Drive, an automotive website.

The Portuguese navy said it rescued all 22 crew members via helicopter. Authorities described the rescue mission as "highly skilled and physically demanding." The crew members were taken to a hotel on Faial Island in the Azores, according to the Associated Press. None of the crew members were injured in the fire.

The fire was still burning on the ship as of Friday, according to the Portuguese navy, and photos showed white smoke billowing out of the vessel. Joao Mendes Cabecas, a captain of the nearby port of Hortas, told Reuters that lithium-ion batteries in the electric cars on the Felicity Ace caught fire, but it was unclear whether that is what started the blaze.

"The ship is burning from one end to the other," Cabecas said. "Everything is on fire about five meters [16 feet] above the water line."

Tow boats from Gibraltar and the Netherlands are on their way to the site with three expected to be there by Wednesday, Cabecas told Reuters.

The ship will probably be towed to another European country or the Bahamas, according to the outlet.

Angus Fitton, a spokesman with Porsche North America, told The Washington Post that the company was thankful that the Felicity Ace crew members were safe. He confirmed that "a number of our cars are among the cargo."

"We are in contact with the shipping company, and the details of the cars on board are now known," Fitton said. "While it remains too early to confirm what occurred and next steps, we are - along with our colleagues at Porsche AG - supporting our customers and our dealers as best we can to find solutions. Anyone concerned by this incident and the implications on the car they've ordered should contact their Porsche dealer."

It remains unclear how many of the thousands of luxury vehicles onboard have been lost in the blaze, but it's probably millions of dollars worth. The Felicity Ace can carry more than 18,700 tons of cargo.

Depending on the model of the Porsche, the average price for the German-made vehicle can range from $101,000 to $174,000, according to U.S. dealers. In addition to the Porsches and Volkswagens, there were also 189 Bentleys on the ship, the Drive reported. Newer-model Bentleys can cost between $166,000 and $348,000, according to Car and Driver.

A spokesman for the Volkswagen Group confirmed that the Felicity Ace was transporting its vehicles to the United States but declined to elaborate on the extent of the losses.

"We are in contact with the shipping company to get more information about the incident," said the spokesman, Dirk Ameer.

The Japanese shipping line Mitsui O.S.K. Lines, which operates the Felicity Ace, did not immediately respond to a request for comment.

The cargo ship fire is the latest wrinkle in the ongoing supply chain struggles that have affected U.S. retailers large and small since the start of the coronavirus pandemic. The U.S. Agriculture Department recently suspended imports of avocados from Mexico at a time when Americans were celebrating one of their two most avocado-centric events: the Super Bowl. (The other is Cinco de Mayo.)

Felicity Ace crew members issued a distress signal Wednesday morning after a blaze was reported on one of the cargo decks. Soon thereafter, the ship was designated as "NUC" - not under command - and the crew members were swiftly evacuated, according to FleetMon, a ship-tracking database.

"Welp, some folks aren't getting their long awaited Porsches and whatever else was on this boat," wrote writer and photographer Zerin Dube.

That same day, Porsche acknowledged the Felicity Ace fire in notices sent to customers tracking the status of their cars.

"We kindly ask for your patience while we work diligently on getting the Porsche of your dreams to you as quickly as possible," the company wrote.

A Portuguese navy ship is monitoring the Felicity Ace to see whether the cargo ship is sinking or causing pollution, authorities said. A navy spokesperson told AP that it's unlikely the ship will be towed to a port in the Azores because of its massive size.

Matt Farah, a car enthusiast and editor of the Smoking Tire, is one of the customers who believes his vehicle is stuck at sea. Farah tweeted that he had been waiting since August for a 2022 Boxster Spyder that was modified to his specifications. The vehicle, which he declared as "the best sports car of all time, hands down," has a retail price of about $123,000.

But when he got the call from his dealer, he was left disappointed and stunned.

"My car is now adrift, possibly on fire, in the middle of the ocean," he wrote.

While he's not sure if his car survived the fire, Farah said it's likely the vehicle will need to be rebuilt.

"Odds are a new build and hopefully not another 8 months wait for it," he tweeted.