Brexit supercharges the political push toward a united Ireland 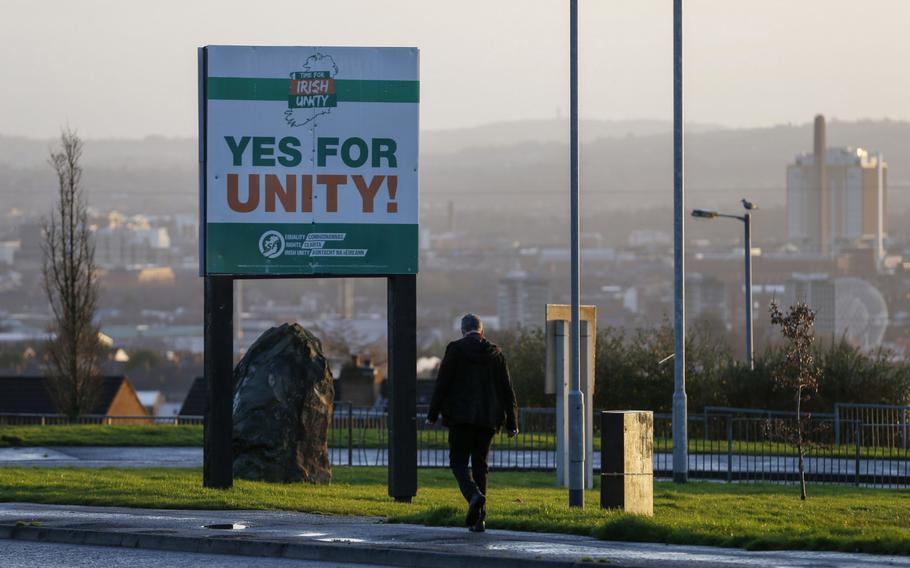 A pedestrian passes a sign that read “Yes For Unity!” placed by Sinn Fein in Belfast, Northern Ireland, on Jan. 3, 2020. (Hollie Adams/Bloomberg)

One potent force is emerging from the torpid dispute over Northern Ireland between the U.K. and European Union, and the potential consequences could redraw the map more dramatically than Brexit.

Sinn Fein, whose ultimate goal is a united Ireland and the end of British rule, is leading the polls ahead of critical elections to Belfast's power-sharing assembly on May 5 after pro-U.K. unionist parties lost ground since the divorce from the EU. It puts Sinn Fein on course to take the post of first minister for the first time just as the party's popularity has also swelled in the Republic of Ireland because of discontent over the economy.

The seemingly inexorable rise of a group that was linked with the sectarian violence that blighted Northern Ireland for three decades threatens to upend the political order in ways that would reverberate worldwide.

A powerful Sinn Fein both north and south of the Irish border would reinforce the drive for reunification, even if there's little prospect right now of a referendum on the issue. In the Republic, an election isn't due for three years, but it will take a marked reversal to stop Sinn Fein gaining the mandate to play a major role in the government in Dublin for the first time since Ireland became an independent state a little over a century ago.

"The whole political landscape has shifted dramatically," said Diarmaid Ferriter, professor of modern history at University College Dublin. "Psychologically, symbolically and practically, this is about a change of guard and given the loaded history of Northern Ireland and the nature of the state, it's a very significant development."

The political sands have definitely shifted. Unionists loyal to the U.K. no longer have a clear majority. Brexit, which the biggest unionist party backed when Northern Ireland overall voted against it, has also further fueled the nationalist cause because of a growing negative view of the British government and dysfunction at the executive in Belfast.

Northern Ireland's government was effectively paralyzed this month when First Minister Paul Givan of the Democratic Unionist Party, or DUP, resigned in protest over the Northern Irish Protocol. That's the part of the Brexit divorce treaty that keeps the region in the European customs union and prescribes checks on goods coming in from the rest of the U.K.

Talks between the U.K. and EU at resolving their dispute over how it should all work have been at an impasse for months. Diplomats say they see little chance for any substantial progress until after May's election. Any outcome will also be closely watched in Washington. President Joe Biden, who is of Irish ancestry, has said stability in Northern Ireland can't be jeopardized by Brexit.

The DUP's opposition to the protocol hasn't played well with the electorate. The party's share of first preference votes has slumped by a third from five years ago, according to a recent poll from the Institute of Irish Studies University of Liverpool and The Irish News. A January poll for LucidTalk and the Belfast Telegraph newspaper put Sinn Fein eight percentage points ahead.

That also puts Sinn Fein's candidate for first minister, deputy leader Michelle O'Neill, in pole position. She would head the local government in conjunction with a deputy of equal standing from a unionist party, yet having the title would be symbolic. It would be the first time a nationalist would have held the position since the Belfast assembly was born out of the 1998 Good Friday Agreement that heralded an often precarious peace in Northern Ireland.

It's also a scenario that would have been inconceivable a generation ago for a party that was widely regarded as the political wing of the Irish Republican Army as recently as the 1990s, said Brian Hanley, assistant professor in 20th century history at Trinity College Dublin.

"The idea that they would one day not only be the majority representatives of the nationalist community but also close to the position of first minister would have been unthinkable," he said.

A census carried out last year may show the Catholic population, which has been traditionally more supportive of a united Ireland, is closing the gap on the Protestant majority from where the pro-U.K. side derives most of its support.

The popularity of Sinn Fein, meaning "We Ourselves" in Irish, has been growing in the Republic, too. Under leader Mary Lou McDonald, the party has been able to appeal to voters on socio-economic issues such as housing and inequality. A December poll put the party on 35%, with governing coalition parties Fianna Fail and Fine Gael lagging 15 points behind.

"The duopoly of Fianna Fail and Fine Gael, which have essentially dominated Irish politics since the Civil War, has been broken," Hanley said.

Any prospect of a united Ireland is still a long way off, but a dominant Sinn Fein would shine the spotlight on how it could happen a little over a century since the island was partitioned with the south gaining independence and the north remaining under British rule.

Indeed, the breakup of the U.K. has been a theme of Brexit since the country held its referendum on EU membership in 2016. But much of the focus was on Scotland, whose pro-independence nationalist party runs the semi-autonomous administration in Edinburgh and has vowed to hold another vote on leaving the U.K. The government in London has refused to sanction one.

In Northern Ireland, the Good Friday Agreement includes a mechanism for a vote on reunification if the U.K. government considers it would likely be passed. That's still not the case, but it's clear the nationalists have the momentum. A referendum would also need to be held south of the border.

Polls conducted in November and December in Northern Ireland and the Republic of Ireland found voters expecting a united country in the next 10 years. A survey by Lord Ashcroft found that most respondents in Northern Ireland said they would choose to remain part of the U.K. if a poll were held today, though most also think there should be a vote.

"Those who have become nationalist in response to Brexit have become increasingly strongly of the view that a united Ireland would be a better arrangement to live in and they think that it's going to happen," said Katy Hayward, professor of political sociology at Queen's University Belfast.

Of course, a united Ireland is not a desire that is exclusive to Sinn Fein. Yet the party's increasing popularity is challenging its rivals to assert it more vociferously.

Having refused to work with Sinn Fein after they pulled in 25% of first preference votes in the 2020 election, Fianna Fail Prime Minister Micheal Martin hasn't ruled out forming a government with them in the future. Fine Gael leader Leo Varadkar recently emphasized his belief in a united Ireland and the need to engage with voters in the north.

There's a sense of "why should Sinn Fein get to wrap the green flag around themselves?" Ferriter said. "The whole fallout from Brexit has flexed Irish nationalist muscles."