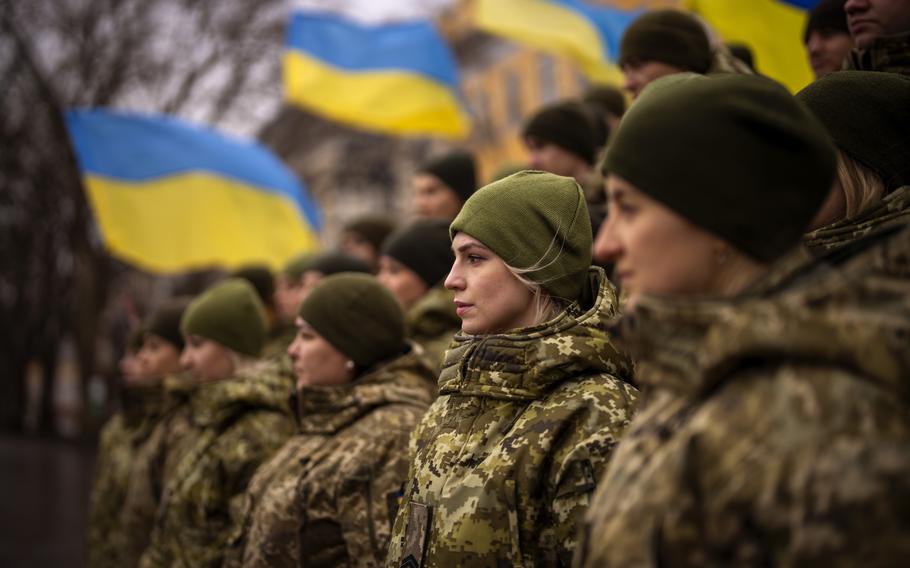 Ukrainian Army soldiers pose for a photo as they gather to celebrate a Day of Unity in Odessa, Ukraine, Wednesday, Feb. 16, 2022. As Western officials warned a Russian invasion could happen as early as today, the Ukrainian President Zelenskyy called for a Day of Unity, with Ukrainians encouraged to raise Ukrainian flags across the country. (Emilio Morenatti/AP)

KYIV, Ukraine - A kindergarten in eastern Ukraine was one of the civilian structures hit by artillery from Russian-backed separatists Thursday, Ukrainian officials said, heightening tensions in a region already on edge as Moscow’s forces mass along the Ukrainian border.

Three adult employees suffered concussions, the military said in a statement posted to social media, but it appeared children were unharmed. They were in a different room, according to local media reports.

Shelling near the demarcation line in Ukraine’s eastern Donbas region is common, but the wave of activity on Thursday appeared more aggressive than usual. Meanwhile, pro-Russian separatists accused Ukrainian government troops of opening fire on its territory, which Ukraine’s Armed Forces denied. Ukrainian soldiers are under instruction not to return fire.

“The situation on the line of contact has sharply escalated. The enemy is making attempts to unleash active hostilities,” a message posted on the official self-proclaimed Donetsk People’s Republic Telegram channel said.

A senior State Department official said it was still unclear if Thursday’s shelling represented the “false flag” U.S. officials were worried could be used to justify a Russian attack or the typical tit-for-tat that has been happening in Ukraine’s east since 2014.

The Ukrainian military reported 29 cease-fire violations up and down the border before noon, the vast majority of them with weapons that violate previous agreements. But officials singled out shelling of the kindergarten building near the self-proclaimed Luhansk territory as particularly shocking.

A howitzer shell blew a hole through one wall, sending bricks, toys and soccer balls scattered across. One impact crater landed near a play area. In all, 32 artillery rounds landed in the village, the statement said, which disrupted electricity for half of the population.

Stanytsia Luhanska, where the kindergarten is located, is an area where both Ukrainian and separatist forces withdrew from front-line positions in 2019 as part of an agreement to create a disengagement area.

The Organization for Security and Cooperation in Europe, which logs regular firing between Moscow-armed separatists and Ukrainian soldiers, hasn’t reported any significant change in the conflict even as Russia has moved more than 100,000 troops to Ukraine’s borders.

Russia has said it has moved some troops from border areas. At a NATO meeting in Brussels, Defense Secretary Lloyd Austin told reporters that Russia instead has boosted its forces to have about 150,000 troops near Ukraine.

The Washington Post’s John Hudson in Washington contributed to this report.