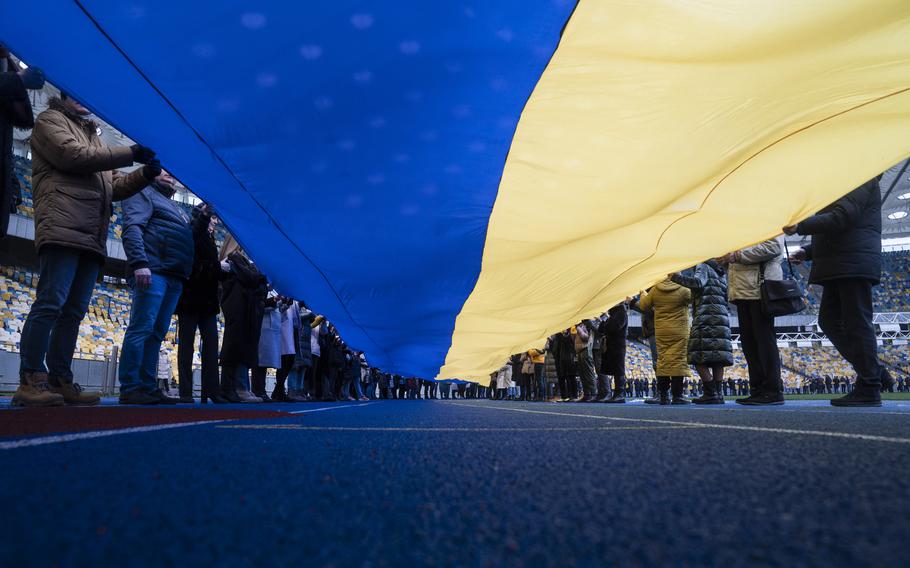 KYIV, Ukraine - Ukrainians woke up on not knowing if February 16, 2022 was to be a date that would live in infamy. Or maybe in unity. Or maybe it would mark just another day of the grinding geopolitical intrigue they have been enduring for months.

For most, the day - which some breathless commentators had all-but declared to be the date for Russian tanks to roll into Ukraine - felt just like an ordinary Wednesday.

“I have to go to work, that is all,” said Oleksander, a Kyiv retail manager walking down a street in central Kyiv, who declined to give his last name to protect his privacy. “My wife has to work. And after, we will meet for coffee.”

Oleksander had heard of President Volodymyr Zelensky’s call for Ukrainians to take control of the date by turning it into “Unity Day,” hoisting flags and singing the national anthem in squares and sidewalks at 10 a.m. He didn’t think he would have time. “It’s actually been busy lately.”

“Everyone is talking about war and what will happen and blah blah blah. But for people who are working, it’s all the same. Just an ordinary day,” she said the 24-year-old who was wearing headphones and working a vape pen.

Kuznetsova has been keeping a nervous eye on the value of the Ukraine’s currency, the hryvnia, as it has slipped against the dollar and other currencies. So far, her spending power hasn’t been eroded. She thinks the standoff continuing indefinitely is far more likely than a full-scale Russian attack, despite the wall-to-wall media hype.

“Some magazines and whatnot are saying war will happen, but what we see now is just people trying to scare another country,” she said. “But everything is calm here.”

Or was it? Maybe not as a calm as it looked, theorized Valera Klymenko, who was reading a nearby display on the history of the neighborhood, one of Kyiv’s oldest. The 60-year-old thinks his fellow Ukrainians are feeling the heat of the Russian threat despite the cool front they are putting on for each other and the world.

“People are scared on the inside,” he said.

Like many Ukrainians, Klymenko was keeping up on developments. He knew the Russians had announced troops were being pulled back from the border, but the NATO had yet to confirm any meaningful drawdown. Targeted cyber strikes against Ukrainian businesses and agencies were still underway. He saw predictions that the fighting would begin in the early morning hours.

And were you able to sleep on the night before “Invasion Day,” Mr. Klymenko?

As 10 a.m. approached, there were few signs that a mass show of patriotism was about to go display.

Maidan Square, the central-Kyiv plaza that was the birthplace of mass protests in 2014 that toppled Ukraine’s last pro-Russian government, had been draped with a huge Ukrainian flag. But the space was empty except for one group near the subway entrance gathered around a portable speaker.

Someone passed out handmade posters - “Ukraine is United” and “Unity Equals Love.” By the time the first strains of the national anthem began to play, some 100 people had gathered. They sang together in the cold as journalists looked on and two drones buzzed overhead. One car sounded a note of drive-by solidarity.

Anastacia Kuleba, 27, said she heeded Zelenksy’s call to form patriotic “flash mobs” because she wanted Russia to know that Ukrainians would not be cowed.

“Ukrainians are united,” said Kuleba, who was forced to flee the eastern city of Donetsk in 2014, the area now controlled by Moscow-backed separatists in Ukraine’s war-battered Donbas region in the east. She has since lived in my many parts of the country, but never again in her eastern home. “My story is Ukraine’s story.”

She did not think a battle was likely anytime soon, based on her experience with a near surprise-attack by Russian-backed forces eight years ago.

“There is not all this talking,” Kuleba said. “It begins in silence.”

The scene was repeated at spots around the country, usually in demonstrations organized by government agencies. Employees of the Ministry of Youth and Sports unrolled a 220-yard Ukrainian flag around the track of the Olimpiysky National Sports Complex.

Schools called assemblies for students to sing the anthem while holding blue-and-yellow balloons - the colors of the Ukrainian flag. In the far western city of Lviv, about two dozen staffers of a government office came outside to sing in traditional Ukrainian garb.

At Ukraine’s national parliament, small business owners who have gathered for weeks to oppose potential changes to the country’s tax and retail laws, paused in their protests to join in the moment of unity Wednesday morning.

“We sang the anthem as Ukrainians first,” said one of the protesters. “But we still have to fight for our businesses.”

Yes, the threat of war is a worry, said protester Yana Kuchery. But not even Russia is the main worry for Ukrainians struggling to recover from the pandemic, inflation, spiking electric bills and the prospect of higher taxes.

Kuchery, who owns a Kyiv coffee shop, said the United States and European leaders have made it harder on Ukrainians by pulling out the embassy staffs and fanning fears of invasion.

“If you want to support Ukraine, why leave?” she asked. “You should be standing with here today on Unity Day.”

No one seemed to mark the moment of unity at all around Kyiv’s iconic Golden Gate, site of one of the city’s medieval fortifications.

Ksenia Narozhnaya, a single mother of two, was killing time on a bench before a doctor’s appointment. She had considered staying home, just in case.

“I was thinking, ‘Maybe I should stay home with the kids today?’” she said. “But then you turn on your brain and think, ‘Wait, the whole world says the invasion is happening on the 16th, which means it definitely won’t happen on the 16th.’”

Narozhnaya said she didn’t get swept up in Zelensky’s Unity Day plans, but his message of keeping calm resonated with her. Her 14-year-old son came home from school recently worried war would start soon.

Narozhnaya showed him three bags she keeps by the door - one with cash, one with important documents and one with food and a couple of toys. If anything happens, she told him, he should grab his 4-year-old sister and go to the bunker at the church in their neighborhood. If mom isn’t around, then he should wait there for several days. If they get separated, they should meet at the local park the next Wednesday.

Tension with Russia is especially personal for Narozhnaya. She was raised in Donetsk. Her parents still live there, and it’s hard to see them with travel into and out of the self-proclaimed republic limited. There’s emotional distance too. Her parents are sympathetic to Russia and their Russian-speaking neighbors.

They talk on the phone often, but politics are a subject they avoid.

“Every time my mother says something that I disagree with, I have to remind myself that she’s still my mother,” Narozhnaya said, breaking down in tears. “The people who live there, you have to understand that a portion of them want something else and a portion just want to live in Russia. And that’s the truth, no matter how much it hurts to say.”

Narozhnaya gathers herself in the cold of a morning that may still see Ukraine’s pain, fear and ambiguity devolve into war. Or one that may just mark another day of waiting.

“But they’re family and we love them.”

The Washington Post’s David L. Stern in Lviv, Ukraine, and Alex Sipigin in Kyiv contributed to this report.