The great climate backslide: How governments are regressing worldwide 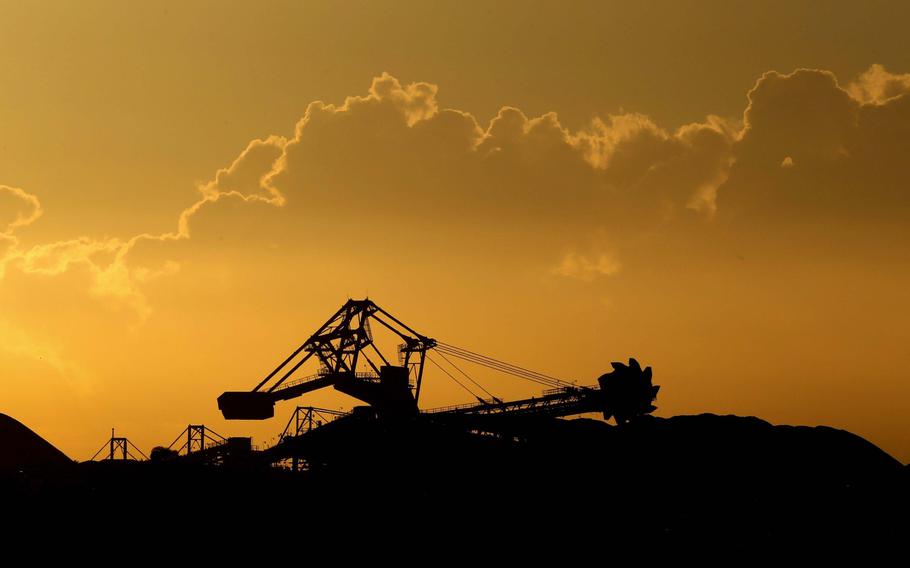 A stacker-reclaimer operates next to stockpiles of coal at the Newcastle Coal Terminal in Newcastle, New South Wales, Australia, on March 26, 2021. (Brendon Thorne/bloomberg)

At the conclusion of COP26 in November, summit chairman Alok Sharma praised the "heroic efforts" by nations showing they can rise above their differences and unite to tackle climate change, an outcome he said "the world had come to doubt."

Turns out the world was right to be skeptical.

Three months on, a toxic combination of political intransigence, an energy crisis and pandemic-driven economic realities has cast doubt on the progress made in Scotland. If 2021 was marked by optimism that the biggest polluters were finally willing to set ambitious net-zero targets, 2022 already threatens to be the year of global backsliding.

From the U.S. to China, in Europe, India and Japan, fossil fuels are staging a comeback, clean energy stocks are taking a hammering, and the prospects for speeding the transition to renewable sources of power are looking grim. That's even as renewable energy costs have fallen rapidly and investment in clean technologies is soaring, while voters across the world demand stronger action.

"We're going to have a multi-year stress test of political will to impose costly transition policies," said Bob McNally, president of Washington-based consultant Rapidan Energy Group and a former White House official. He accused governments of showing "Potemkin support" for the necessary policy steps, a sham display of action that's being exposed by the energy crisis.

Emissions rose last year, when they needed to decline if the world is to stay on track to hit climate goals. National interest was always going to run up against the kind of painful measures scientists agree are needed to meet the goal of limiting global warming to 1.5 degrees Celsius relative to pre-industrial levels. But even this early in the year, the headwinds to aggressive climate action are ferocious.

Oil is on a roll as the world economy picks up from its pandemic-induced swoon, nearing $100 a barrel just two years after the price collapsed. That's swelling the coffers - and influence - of fossil fuel giants like Saudi Arabia and Russia, while reinvigorating an industry that had been shifting its focus to clean energies. Exxon Mobil has just given a vote of confidence in the U.S. shale industry with plans to boost output by 25% this year in the Permian Basin. And with gas prices hitting records, utilities have been turning to coal instead, despite it producing about twice the carbon, according to Kit Konolige, an analyst at Bloomberg Intelligence.

Even the U.K. host of COP26 risks regressing, with Prime Minister Boris Johnson on the ropes and some members of his Conservative Party pushing back against his green agenda.

Little wonder that U.S. climate envoy John Kerry has seemed increasingly glum, repeatedly warning that the world is falling behind. "We're in trouble," Kerry said during a Chamber of Commerce event last month. "We're not on a good track."

For many, the highlight of COP26 was the surprise agreement by Kerry's team and their Chinese counterparts to look beyond U.S.-China rivalry and jointly raise climate efforts this decade.

That deal still stands, but both nations have since backtracked in their respective actions.

The U.S. was the world's top LNG exporter in January, taking the No. 1 spot from Qatar for a second month running. Coal consumption has surged, while production climbed 8% in 2021 after years of declines. It's expected to inch upward through 2023, according to the Energy Information Administration.

In Washington, President Joe Biden is struggling to get his signature "Build Back Better" bill and its core climate measures through the Senate. An initial proposal, which would have devoted some $555 billion to climate and clean energy, has collapsed amid objections from all of the chamber's Republicans and a key Democrat, Joe Manchin of coal- and gas-rich West Virginia.

Those climate provisions - including some $355 billion in multiyear tax credits for hydrogen, electric vehicles and renewables - are essential to fulfilling the U.S. Paris Agreement commitment to slash greenhouse gas emissions 50% to 52% by 2030. Without them, that pledge is in jeopardy, an analysis by the Rhodium Group found.

Rather than the leadership role that Biden has claimed, that makes the U.S. look like a climate straggler. Enacting the key provisions is needed "to empower us diplomatically," Kerry acknowledged in a January interview. "Credibility will be in a hard place if we don't." Democratic lawmakers are still hoping to revive the legislation, though there's little time with November's midterm elections looming large. And right now Biden is under pressure to confront rising inflation and especially gasoline prices that could weigh on his chances of retaining control of Congress. He's responded by appealing to OPEC+ producers to boost output, asking domestic oil companies to drill more and rallying nations to join the U.S. in a coordinated release of emergency crude stockpiles.

Japan's new prime minister, Fumio Kishida, is feeling similar pressure. Last month, in an effort to keep a lid on prices, his government announced subsidies for oil refiners worth some 3 U.S. cents per liter of gasoline produced. This week, it said it was considering going further to mitigate the impact of rising oil prices amid reports it may triple the subsidy rate.

All of which looks like a free pass to China, the world's biggest emitter.

In several recent high-level meetings, top Chinese officials have stressed energy security alongside carbon reduction efforts. As the People's Daily, a Chinese Communist Party mouthpiece, said in an recent commentary: "The rice bowl of energy must be held in one's own hand."

While top leaders have repeatedly stressed that its record-breaking build out of solar and wind power is part of the campaign to secure China's energy future, the push has yet to tangibly shift the nation's energy mix. China's share of coal and gas in power generation was still as high as 71% in 2021, the same as 2020.

After an unprecedented power crunch that struck China in the second half of last year, Beijing was forced to raise both coal output and imports to record levels. At a group study session of the Politburo last month, President Xi Jinping said that supply chain security should be guaranteed while curbing emissions, and that coal supplies should be ensured while oil and gas output need to "grow steadily."

"Cutting emissions is not aimed at curbing productivity or at no emissions at all," Xi said, stressing that economic development and the green transition should be mutually reinforcing. To illustrate his point, this week China offered its vast steel industry an additional five years to rein in its carbon emissions.

It's a sentiment shared elsewhere. South Africa's Energy Minister Gwede Mantashe told the heads of mining companies on Feb. 1 that coal will still be used for decades and that rushing to end the country's fossil fuel dependency "will cost us dearly."

India's biggest coal miner, state-owned Coal India Ltd., is ramping up production as the country reduces its dependence on imports. It's exposing the carbon-dependent model of economic growth that the West used and which India is yet to walk away from, even after Prime Minister Narendra Modi announced a net-zero target of 2070 in Glasgow.

India is the second-biggest coal user after China, and last year coal accounted for 74% of power generation, followed by renewables with a 20% share, according to the latest report by the International Energy Agency.

Yet that ratio is set to shift, with ambitious plans to build out renewable capacity. Billionaires Mukesh Ambani and Gautam Adani helped drive investment targeting alternative energy to a record $10 billion last year, but that's dwarfed by Ambani's new clean-energy plan worth a total $76 billion.

"The world is entering a new energy era which is going to be highly disruptive," Ambani said last month as he unveiled his plans, which include making his Reliance Industries Ltd. - among the world's biggest oil refiners and plastic producers - net-zero by 2035.

The energy crunch has without doubt cast a shadow on the European Union's debate about how to implement its Green Deal, an unprecedented economic overhaul to reach climate neutrality by 2050. Many governments are concerned that the spike in prices may undermine public support for the reforms.

"The only lasting solution to our dependence on fossil fuels and hence volatile energy prices is to complete the green transition."

The political atmosphere is not helped by the West's standoff with Moscow over Ukraine, a situation that raises the threat of disruption to Russian gas supplies, stoking prices still further. For now, however, flows are intact, albeit more volatile than usual.

Higher fossil fuel and emissions prices may improve the relative economics of renewables. EU leaders have in any case already thrown their weight behind the Green Deal. And with polls consistently showing climate to be among the biggest concerns for the bloc's voters, the European Commission, the EU's executive, is doubling down.

Speaking to reporters on Jan. 22, EU Energy Commissioner Kadri Simson said that geopolitical tensions are compounding unusually high energy prices in the short term. "But we are also at a crucial point in our long-term effort to tackle the climate crisis and ensure a just clean energy transition," she said. "The only lasting solution to our dependence on fossil fuels and hence volatile energy prices is to complete the green transition."

China meanwhile added a record amount of solar power last year, and is likely to break that again in 2022, driven by a nationwide push for more rooftop installations and a mammoth build-out of renewables in the northern deserts.

In the U.S., private sector capital is racing ahead of the political will to enact meaningful climate policy. Globally it totaled $755 billion in 2021, according to BloombergNEF.

Look beyond the horizon, and the longer-term trend toward clean energy is undiminished. The current turbulence reinforces the fact that painful measures were always going to be required. But the cost of inaction is higher: Ten of 2021's worst climate disasters cost the global economy $170 billion.

Even so, uncertainty is everywhere right now, said Christy Goldfuss, a former Obama administration official who is senior vice president of energy and environment policy at the Center for American Progress in Washington.

"It is accurate to look at this moment and be concerned about what progress looks like," she said.