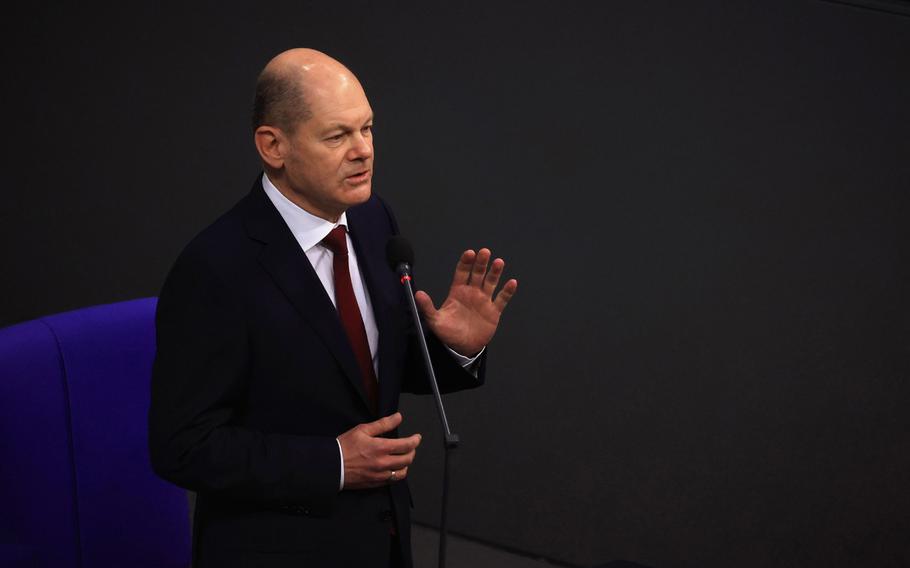 As Russian troops massed on the borders of Ukraine, Gerhard Schröder - who led Germany from 1998 to 2005 for Scholz’s Social Democrats - accused Kyiv of stoking tensions by “saber-rattling.” He called out “Russia-bashing” in the media.

The ensuing furor only grew when the 77-year-old former chancellor was nominated Feb. 4 to the board of Russia’s state-owned energy giant Gazprom, cementing his place as the personification of Germany’s deep energy ties with Russia, and of President Vladimir Putin’s expanding reach into European politics through Moscow’s natural gas riches.

The move has raised concerns that Putin could be using his longtime friend to drive a wedge into Germany’s governing party as it struggles to formulate a coherent policy toward Moscow as Russian troops gather near Ukraine’s borders. And Scholz’s party has been left scrambling to distance itself from Schröder, amid questions about how much influence the former chancellor turned Russian energy lobbyist still wields.

Schröder was instrumental in giving birth to the project that has been the biggest sticking point between the German government and Washington during the current crisis: Nord Stream 2, the yet-to-be operational natural gas pipeline between Russia and Germany.

Despite pressure from the United States, Scholz has been reluctant to join President Biden in unequivocally stating that the pipeline will not be switched on in case of a Russian invasion of Ukraine, citing “strategic ambiguity.”

Although Schröder holds no political position in Germany, his links to the Russian energy sector in such a sensitive period have sparked condemnation from across the political spectrum, including calls to strip him of his taxpayer-funded perks.

“In these times of escalation, this is really wrong,” Roderich Kiesewetter, a Christian Democratic lawmaker on parliament’s foreign affairs committee, said of Schröder’s decision to increase his ties to the Russian energy sector.

At best, Kiesewetter said, Schröder is acting “completely inappropriately” and hurting the image of Germany. But the lawmaker also fears that the former chancellor is part of a Putin “chess game” to try to divide Scholz’s Social Democratic Party, which leads a three-party coalition formed after elections in September that marked the end of Angela Merkel’s stewardship of the country at 16 years.

The former chancellor is not alone in what has been dubbed an increasing “Schröderization” of European politics as Moscow tries to gain political influence via the revolving door between business and the halls of power.

There is the former Austrian foreign minister Karin Kneissl, who was appointed to Rosneft’s board last year and was famously photographed in 2018 dancing with Putin at her wedding. Also, former French prime minister François Fillon was nominated last year to the boards of the Russian state oil company Zarubezhneft and the Russian petrochemicals giant Sibur. A former Austrian chancellor, Wolfgang Schüssel, was made a board member of the Russian oil firm Lukoil in 2019.

But none of their ties come close to Schröder’s in scope and influence. The former chancellor declined an interview request and did not respond to questions sent to his office.

But more important, she said, is the question of how the Social Democrats solve their disagreements over their party’s Russia policy.

For the Social Democrats, dealing with Schröder has become like “dealing with the strange uncle that’s coming over to dinner, you don’t want embarrassing everybody,” she said.

Senior party officials have distanced themselves from Schröder and emphasized that he no longer has major influence in the party. The way Schröder mixes business interests with his role as a former chancellor is “not only wrong” but “even sad,” the general secretary of the Social Democrats, or SPD, Kevin Kühnert, said in a recent interview with the German newspaper Der Tagesspiegel.

“I don’t know anyone in the party who shares his views,” the Social Democratic premier for Rhineland-Palatinate, Malu Dreyer, told the Rheinische Post.

And Scholz has emphasized in interviews in the United States and Germany that the former chancellor does not speak for the party.

“If I understand the constitution of the Federal Republic of Germany correctly, there is only one federal chancellor and that is me,” Scholz told the German broadcaster ZDF when asked about the fact that there were two Social Democrat chancellors giving contradictory statements on the crisis.

But it emerged this week that a member of Scholz’s government had met with Schröder last month to discuss the “future of German-Russian relations and civil society in Russia” in the thick of the Ukraine crisis, sparking a new round of criticism.

“The protestations of the SPD leadership to distance themselves from Gerhard Schröder are refuted by the fact that the former chancellor and a top Russia lobbyist continues to maintain close contact with the Scholz government,” said Matthias Hauer, a parliamentarian with the Christian Democrats who had requested information from the federal government on Schröder’s contact with officials.

According to the information Hauer said he received, Schröder met with Johann Saathoff, the parliamentary secretary of state in the Interior Ministry on Jan. 5. Until December, Saathoff had been the foreign office’s point person on Russia. Also present was Heino Wiese, a former Social Democrat parliamentarian and lobbyist who also is Russia’s honorary consul in Hanover, and Matthias Platzeck, former Social Democrat leader for the state of Brandenburg.

Saathoff did not respond to requests by The Washington Post for comment. But he told the German newspaper Süddeutsche Zeitung that he had requested the meeting to discuss “civil society” and that Schröder did not try to influence government action.

The pro-Kremlin leanings of the former chancellor have long been known. While still chancellor in 2004, Schröder famously described Putin as a “flawless democrat.” The same year, Putin traveled with a Cossack choir to Schröder’s home in Hanover for the chancellor’s 60th birthday.

He used his last few days in office to set the wheels in motion for the first Nord Stream pipeline. It was 10 days before the 2005 elections - which he looked set to lose - when he left the campaign trail to sign a letter of intent with Putin on the pipeline. It gave Russia a way to send natural gas to Europe that bypassed Belarus, Poland and Ukraine - and weakened those countries’ leverage against Moscow.

Less than three weeks after Schröder left office, he was appointed head of the shareholders committee at Nord Stream. He has since used his connections to lobby on behalf of the new sister project, Nord Stream 2, opening the door for Gazprom chief executive Alexey Miller to meet with officials in Berlin.

In the thick of the last conflict in Ukraine, Schröder celebrated his 70th birthday in St. Petersburg at a Nord Stream-hosted event that Putin attended. They greeted each other with a warm hug, just two months after Russian forces annexed Crimea. In 2017, he took up the position of chairman of Russia’s state-controlled oil giant Rosneft, which is under U.S. and European Union sanctions for Russia’s 2014 annexation of the Crimean Peninsula from Ukraine and for other acts.

“Sure, he’s just a former chancellor, but he of course has a huge network in Germany,” said Timo Lange, a campaigner with LobbyControl, a Berlin-based lobbying watchdog. “In public discourse, he always speaks with the authority of a former chancellor. It gives a lot of politicians in the Social Democrats a lot of headaches.”

A recent article by Germany’s t-online news website outlined Schröder’s meetings with Manuela Schwesig, the prime minister of Mecklenburg-Vorpommern state, where the Nord Stream 2 pipeline makes landfall in Germany. Schwesig also is a Social Democrat and known for her staunch backing of business links with Russia, including the pipeline.

“They have a pretty huge economic interest that Nord Stream happens,” Lange said of the state government. “Schröder uses his influence where he can.”

The former chancellor has said he is working in the interests of Russian-German ties.

When asked whether he feared being used by Putin, he said: “I am not usable.” The salaries for his positions with Nord Stream are not public.

But during the current crisis, outrage has reached a new peak. “Why does he do this?” read a headline in Germany’s Süddeutsche Zeitung on Wednesday.

“The former head of government is Vladimir Putin’s best man in Germany,” it added.

The controversy comes as the Social Democrats struggle to unite on a Russia policy and Scholz tries to bring together a left-leaning wing that espouses detente toward Russia as forwarded by the party’s Cold War-era chancellor Willy Brandt, crafting the approach with the reality of today’s geopolitics in mind.

“The party does not really have a direction or speak with a single voice,” said Peter Matuschek, the head of political and social research at the German polling firm Forsa. “The former chancellor Schröder complicates things even more.”