‘We need to go’: A burst of gunfire on Ukraine’s front line and echoes of wider risks with Russia 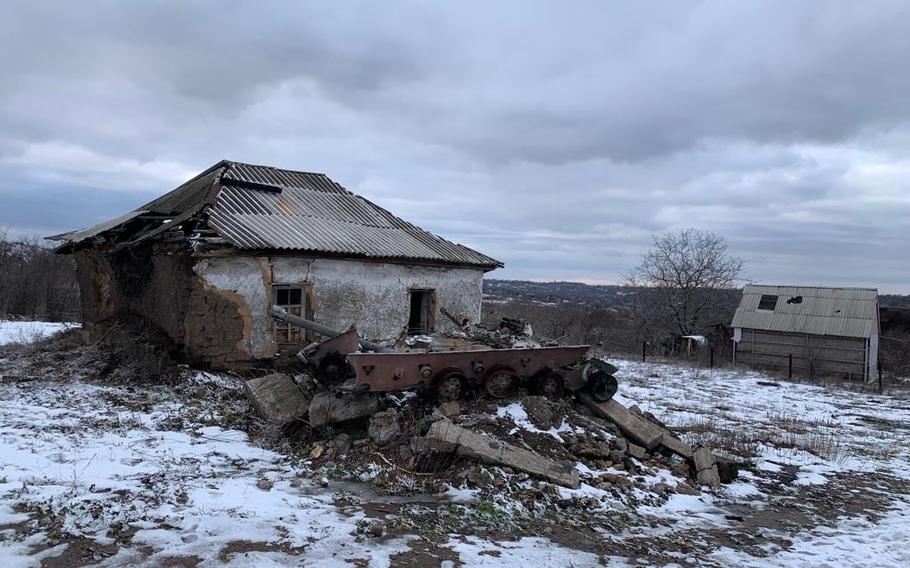 The town of Avdiivka, Ukraine, on the front line with Russia-backed separatists on Wednesday. (Steve Hendrix/Washington Post)

AVDIIVKA, Ukraine - For the Ukrainian soldier standing in the icy slush outside a ruined warehouse, war is not a looming geopolitical threat. It’s a daily grind.

For months, 26-year-old Maxim has spent his days - and many nights - patrolling this wasteland of shattered factories and abandoned workshops. The compound that used to be the Avdiivka Industrial Zone has seen some of the bloodiest fighting in the eight-year battle with Russian-backed separatists in eastern Ukraine.

The two forces are less than 100 yards apart, separated by rubble and razor wire. Attacks and brief clashes have been part of the front in Avdiivka for years. Now any incident, however small, carries a much larger risk.

Western officials and their allies in Kyiv worry about any spark on the battlefield and how it could be used by Russia as a potential pretext for military action - as its forces build along Ukraine’s border.

“They try to hit us with grenade launchers, shelling, small-arms fire,” said Maxim, who declined to give his last name to protect his family’s privacy. “It isn’t easy conditions, but it’s what we signed up for.”

On Wednesday, it happened again.

The commanding officer of the region, Lt. Gen. Oleksandr Pavliuk, toured the front with a group of journalists. Many had flown in from Kyiv in one of Ukraine’s Russian-built military transports, never climbing more than a few hundred feet to avoid Russian radar.

They were careful not to step from the soldiers’ well-trod paths. Unexploded ordnance is a danger.

“We have to be as quiet as possible now,” a military interpreter said as a group entered a semi-demolished factory. This is the forward operations post, hard on the “line of contact” that marks the narrowest division between Ukrainian and Russian-backed fighters.

Only minutes into Pavliuk’s remarks, the first burp of machine gun fire sounded from the separatist side.

“The world needs to come here to see what Russia has been doing for year after year . . . ,” he said, standing behind a wall of ammo boxes and under a tangle of twisted metal.

“What we are seeing today is nothing new,” he resumed. A pistol was tucked into the webbing of his body-armor vest.

Another burst of fire. And then another. And more still.

“We need to go now everyone,” one of the officers said firmly. “Now, quickly.”

One by one, the group moved past camouflage netting and tire-wall barricades, stepping over the wooden pallets that bridge wide gaps in the floor of the former factory. One Ukrainian cameraman slipped on ice.

In Avdiivka’s industrial zone, as many as 44 fighters were killed in one of the war’s deadliest battles in 2017.

No one was wounded in Wednesday’s gunfire on the Ukrainian side. Immediately it was back to the hardscrabble normalcy of the place. Stray dogs stalked warily through the warren of roofless hulks, skirting the frozen puddle and burned vehicles strewn on every side.

Soldiers in their winter whites stood every few dozen yards, scanning sight lines, ever mindful of the cover provided by leaning walls and earthen berms.

Pavliuk, who was a battalion commander eight years ago when war broke out, takes the long view. Whatever the resolution of this current crisis, Ukraine is ready for the permanent one.

“No matter how many troops Russia has, we will stay here. We will defend our motherland,” he said.

And then more gunfire. Louder this time.

The group, all clad in body armor, again hustled over snow and ice to the safety of distance from this scarred place.

The soldier Maxim shrugged at the idea that these common flare ups on the front lines could become the trigger for an invasion by Russian troops.

“Here, nothing has changed,” he said.