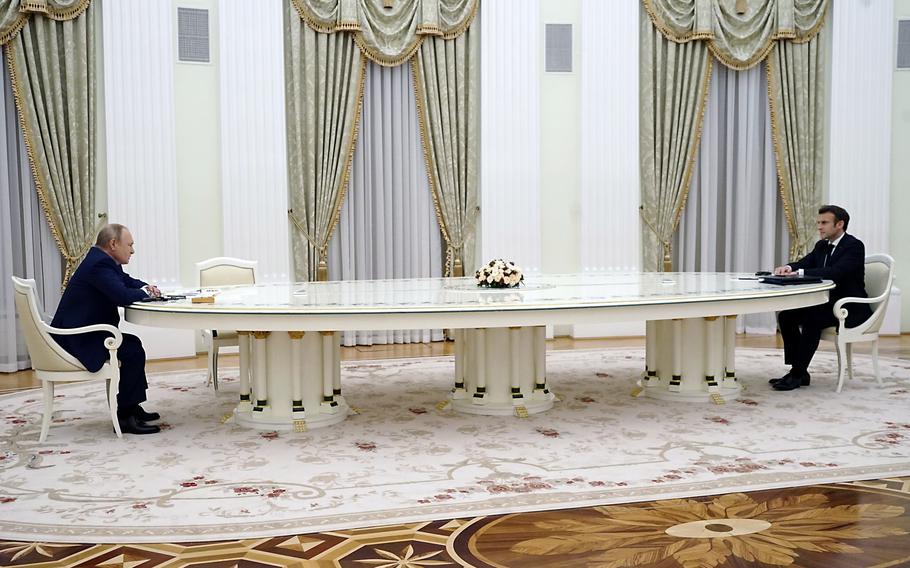 Russian President Vladimir Putin, left, listens to French President Emmanuel Macron during their meeting in the Kremlin in Moscow, Russia, Monday, Feb. 7, 2022. Macron traveled to Moscow in a bid to help defuse tensions amid a Russian troop buildup near Ukraine that fueled fears of an invasion. (Sputnik, Kremlin Pool Photo/AP)

MOSCOW — Russian warships sailed toward the Black Sea on Tuesday, stoking alarm among U.S. and European security officials who warned that the final capabilities for a large-scale assault on Ukraine appeared to be falling into place.

On a day of frantic shuttle diplomacy by French President Emmanuel Macron, who hopped among capitals trying to avert a conflict, Russian officials gave little sign that the French leader's initiatives had changed their calculations.

Instead, U.S. and European officials said they were eyeing the next 12 days with increasing concern, fearing that Russian military exercises scheduled to start Thursday could provide cover for a sudden strike against Ukraine and that the Feb. 20 conclusion of the Olympic Games in Beijing clears away a potential diplomatic barrier for Russian President Vladimir Putin, who may fear upstaging Chinese President Xi Jinping.

Macron, who has cast himself as the key European interlocutor as the Kremlin demands to rework the continent's security architecture, offered measured optimism Tuesday following talks with Putin in Moscow and then with Ukrainian President Volodymyr Zelensky in Kyiv.

"No one is naive," Macron said in a joint news conference with Zelensky. "I don't think we can settle this crisis with a few hours of discussion." He expressed his belief that there are "specific, practical solutions that will allow us to move forward," but offered no details.

He said he sought "new mechanisms that guarantee security."

Later in the day, Macron met with the German and Polish leaders in Berlin. They pledged that they stood united against Russia - but offered little to break the deadlock. Macron said political advisers would meet in Berlin on Thursday to try to revive a 2015 truce focused on the breakaway parts of eastern Ukraine, but there was little sign that Putin would accept a reboot of a seven-year-old diplomatic deal as enough of a victory to send his troops home.

The current situation is "the most difficult one we've faced since 1989," said Polish President Andrzej Duda.

NATO diplomats, speaking on the condition of anonymity to talk frankly about internal strategic discussions, said they worried Putin's demands were so expansive that there was little or no room for a compromise that all sides would find acceptable. Russia also has called for the alliance to cease all military activity in the region.

"When people say it's not rational for Putin to go to war, well, is it rational for him to accept a major diplomatic defeat?" asked François Heisbourg, a senior adviser for Europe at the International Institute for Strategic Studies. "The logic of the situation is scary."

The detachment of Russian warships moving into the Black Sea, six large landing vessels, will take part in an exercise, the navy said. The Russian military has in the past used that as a bluff before invasions.

The development "shows that the problem has not yet been solved," European Union foreign policy chief Josep Borrell told reporters in Washington. "The visit of President Macron to Moscow was important, but it has not produced a miracle."

But, in a separate appearance, Borrell said that he did not believe that Russia was on the "eve of a full-fledged war."

The Russian landing ships typically are used for unloading troops, vehicles and materiel onto land. Some took part in Russia's invasion of Georgia in 2008. The Russian navy said in a statement they were intended for use in an exercise, but once in the Black Sea they will be within range of Ukraine's long southern coastline.

U.S. and European officials said the Russian military movements give increasing cause for concern. On Thursday, Russia is set to begin a 10-day exercise with Belarus, positioning large numbers of troops and weapons in a friendly country that borders Ukraine to the north.

European intelligence services have tracked Russia redirecting military equipment, including ammunition, from positions in western Russia by rail to Belarus, according to people familiar with the information who, like others, spoke on the condition of anonymity because they were not authorized to discuss it publicly. Commercial satellite imagery in recent days has also shown missiles, rocket launchers and attack aircraft deployed in Belarus at three locations close to Ukraine's border.

The buildup of forces has U.S. and European officials concerned Russia could mount an assault on Kyiv by sending troops south to the Ukrainian city of Zhytomyr and then moving east toward the capital. At the same time, a larger force could advance westward from Russian territory.

The officials said weather from February through late March would be favorable for the invasion; Ukraine's flat, open terrain and the rivers that crisscross it would be frozen, allowing armored vehicles to maneuver more easily.

Russian officials on Tuesday repeated pledges that they planned to withdraw forces from Belarus after the exercises.

The annual Munich Security Conference is scheduled to take place from Feb. 18 to 20. It could present another opportunity for Russian diplomats to engage in negotiations. It is unclear whether Zelensky will attend the forum. Some analysts worry that if he leaves Kyiv at a moment of heightened vulnerability, it could give Putin an incentive to strike.

European officials also have assessed that Russia is likely to foment unrest in Kyiv in an effort to destabilize Zelensky's administration, possibly by supporting protests against Western nations. Recent cyberattacks on Ukrainian government websites and false reports that explosives or "mines" had been placed in airports, shopping malls and schools could be part of a campaign to trigger panic among Ukrainian citizens and undermine their confidence in Zelensky's government, according to officials familiar with the matter.

Zelensky, speaking alongside Macron on Tuesday, said it was the first time a French president had visited his country in 24 years, and he described the talks as "substantive and very productive." He has projected an air of calm, denouncing what he and his advisers have characterized as a geopolitical fight between Russia and the West that has little to do with Ukraine itself.

Russia offered no sign of softening Tuesday, as Kremlin spokesman Dmitry Peskov said that de-escalation of the crisis was "urgently needed, because tension is growing day by day." But he complained that the United States and NATO continue to brush off Russia's security demands.

"On the fundamental points, unfortunately, we did not receive a response. Therefore, this topic remains open in the full sense of the word and remains the most important for us," Peskov told reporters. "We do not feel or see the willingness of our Western partners to take our concerns into account."

Russia has massed more than 100,000 troops and equipment near Ukraine's border, positioning them for what U.S. officials warn could be the largest military land offensive in Europe since World War II.

Europe and the United States have so far projected a united front against Putin, apart from the opposing assessments about the likelihood of conflict. A day after German Chancellor Olaf Scholz visited Washington, Senate Minority Leader Mitch McConnell, R-Ky., who had dinner with him Monday alongside other senators, declared that the German leader had assured them behind closed doors that the Nord Stream 2 pipeline project that will send natural gas from Russia to Germany would be abandoned if Moscow again sends forces into Ukraine.

That is further than Scholz has been willing to go in public, including alongside President Joe Biden on Monday. The German leader — in office only since December — has been hemmed in by a coalition that is divided on Russia policy, and he has faced criticism he hasn't done enough to address the crisis.

Scholz "confirmed what President Biden said yesterday — that if Russia invades, Nord Stream 2" will be shut down, McConnell told reporters.

Germany "is going to stand shoulder to shoulder with the United States and the rest of Europe to make sure Putin pays a price," said Sen. Chris Murphy, D-Conn., who was also at the dinner.

Congress has been negotiating a sanctions package against Russia, although the effort's prospects remain unclear.

Scholz is set to travel to Kyiv on Feb. 14 and to Moscow a day later.

- - - Noack reported from Paris, and Harris and Birnbaum from Washington. The Washington Post's David L. Stern in Kyiv, Rachel Pannett in Sydney, and Missy Ryan, John Hudson, Mike DeBonis, Aaron Blake and Paul Sonne in Washington contributed to this report.