Kyiv's question: Where to hide if war roars in? 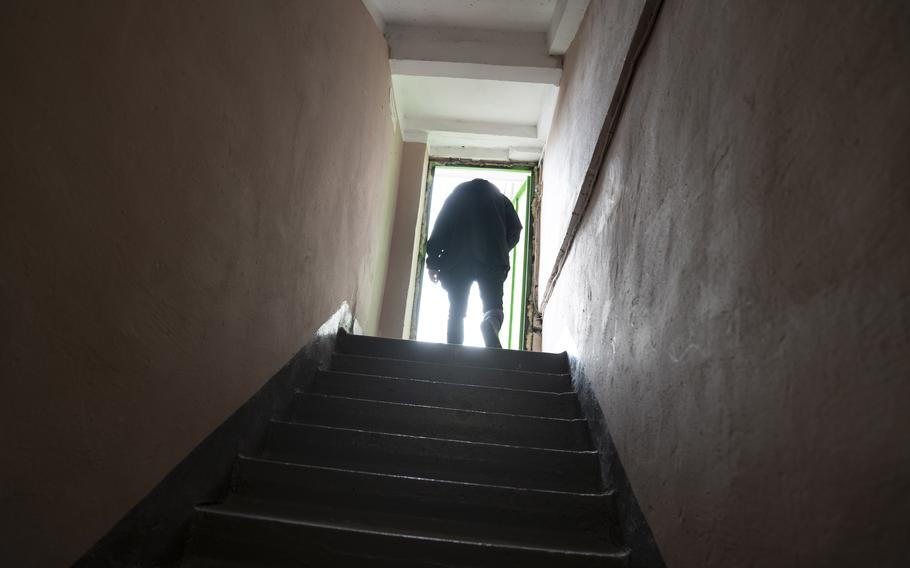 A man walks out of a bunker in Kyiv on Feb. 2, 2022, as residents of Ukraine’s capital begin to prepare for a possible Russian invasion. (Michael Robinson Chavez/Washington Post)

KYIV, Ukraine — Anastasia and Aleksy Kirienko are finding that it's not easy to prepare for the worst.

The couple checked the map of Cold War-era blast bunkers that city officials have dusted off as Russian troops mass at Ukraine's borders. They found the shelter for their block, but it was occupied. By a strip club.

"Will they charge us 400 hryvnia [about $14] to get in?" asked Anastasia, referring to the regular cover charge at the Penthouse Club, which on a recent night cast a red neon glow across the snowy sidewalk of her apartment building.

Like a growing number of Ukrainians, the Kirienkos, both 35, have tried to heed the increasingly dire advice they see on social media: Pack a bag, plot escape routes, make a plan. Their vital documents are ready to grab-and-go if the air-raid warning goes off.

Only, they're not sure they would recognize one of Kyiv's long-dormant Soviet-era sirens if they heard one. Or if the horns will even work. They heard nothing at all during a recent supposed test of the system.

"To be honest, we have no idea what we should be doing," Aleksy said, shrugging in the snow. "Nobody does. This is all new."

Or maybe old. Previous generations of Ukrainians spent decades in the defensive crouch of the Cold War, when the perceived threat was from the west, not the east. Now, after 30 years of independence, the country is straining to recover the muscle memory of risk. 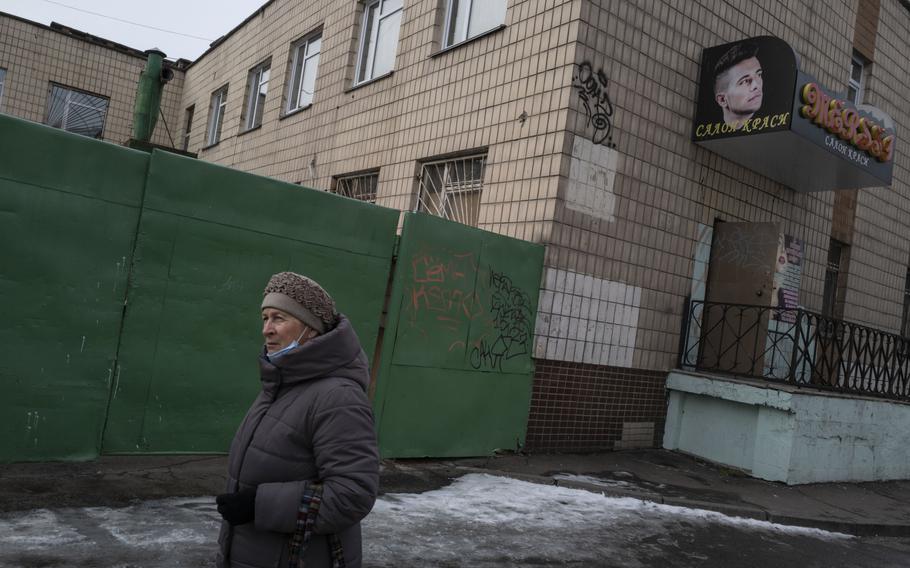 A woman walks past a metal gate that opens to a bunker in Kyiv. (Michael Robinson Chavez/Washington Post)

Even eight years of fighting in the eastern provinces had not forced residents of the capital - more than 350 miles from the contested regions - into this fear for their immediate safety.

"In 2014, there was no buzz like this on social networks," said Anna Pykhtina, 30, a nonprofit manager, referring to the year Russia invaded Crimea and Ukraine's conflict with Russian-backed separatists started in the eastern Donbas region. "This is strange to us."

Pykhtina said her Facebook feed is now filled with prepper pages, how-to lists for packing a go-bag, keeping the car filled with gas, surviving without electricity. She knows people taking online courses in first aid and self-defense. One of her friends has planned a rendezvous with his extended family at a certain highway rest stop, just in case the cell networks collapse.

Pykhtina tried to ignore it all until mid-January, when the news convinced her that the threat was real. Then she made the manager of her building show her where to find the key to the garage bomb shelter ("It's not deep enough, I don't think.") She packed clothes, prescriptions, documents and a few treasures in a small backpack by the front door. None of it helped her mood.

"It made me more anxious," she said. "How can you put your whole life in one bag?"

None of this comes easily to residents of Kyiv, a handsome, hilly city on the Dnieper filled with bright cafes and noisy bars, some of them occupying the network of bunkers now being dragged back into service. The aging vaults house dance studios, comedy clubs, storage rooms and at least one stripper pole.

"We have the most beautiful bunker in Ukraine," said the elevator operator of the Penthouse Club, a grandmotherly little woman in a ringmaster's costume. Some city functionary has taped a paper on the wall with the number to call for the key in off hours, which in this case is anytime before 8 p.m.

Some Ukrainians say the fledgling democracy has no choice but to harden itself even if the current crisis passes without bloodshed. Russia's dogged aggression, they say, demands a new normal of readiness.

"I think we need to live more like Israel, where they expect an explosion anytime," said Elizabeth Bielska, a well-known author and art critic. 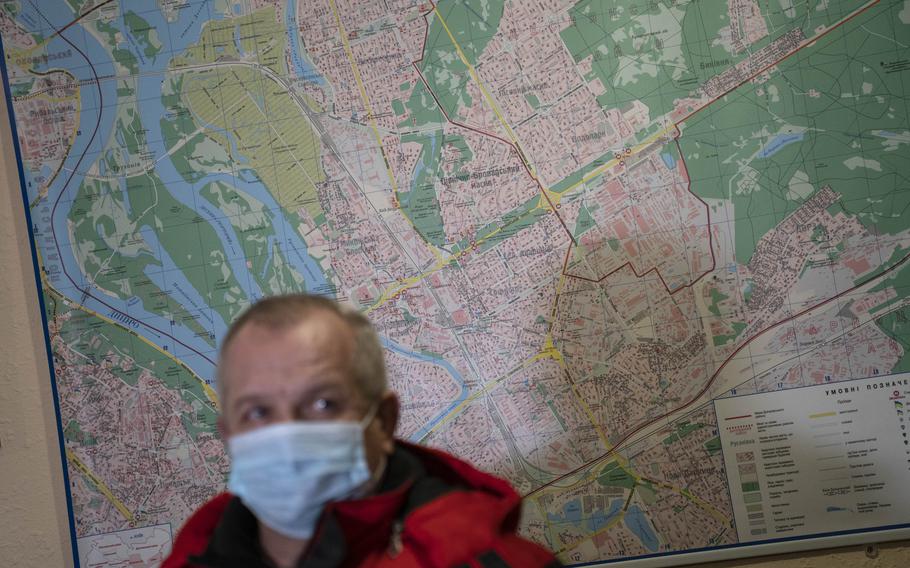 Bielska has gone deeper than most into post-apocalypse training, completing a course that included tips for organizing communal bucket toilets, garbage removal and cadaver burial. She has ordered a military-grade purifier in case the Russians poison the water, and her husband is getting a permit for a hunting rifle with a laser sight.

"It's better to be prepared than dispirited," she said.

The government, meanwhile, is working to put its own civil defense systems on a wartime footing.

Kyiv schools have begun holding evacuations drills. The subway is preparing to serve double duty as a system of mass shelters. Engineers are scrutinizing the siren system that has its circuitry tested weekly but that hasn't actually been activated since Soviet days, according to a city official.

Arsen Avakov, who was Ukraine's interior minister until stepping down last year, said that since 2014 the country has developed robust plans to protect civilian infrastructure and respond to mass emergencies.

The State Emergency Service, an agency of more than 65,000 employees, has tested mobile hospitals, food and water distribution hubs, and the nationwide text message system it employed for the coronavirus pandemic. If the cell networks fail, radio broadcasts will deliver information, and then vans with loudspeakers.

The plans have been war-gamed in full-scale exercises three times since the Russian buildup began, Avakov said.

"We know what to do not just from theory, but from practice," Avakov said. "We are more ready than we were even two weeks ago."

But the biggest challenge may be getting citizens to plan for the unthinkable.

Pykhtina said she's had emotional conversations with her 81-year-old grandmother, pleading with her to get to a subway station if an attack comes. But her grandmother said she would rather take her chances in an air raid than be crammed in with a lot people who may not be vaccinated against the coronavirus.

"She's ready to accept whatever happens," Pykhtina said. "She says, 'I've had a good life. I don't want to run.' "

"Personally, I would like to be alive," she said. "I want to be ready."