A journey across Ukraine shows invasion would come at high price 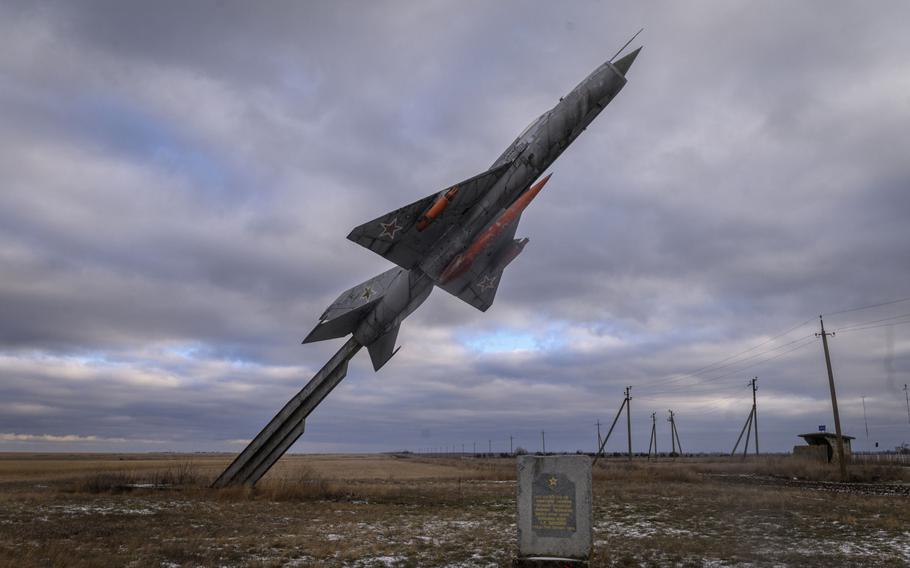 A World War II memorial honoring Soviet forces on the side of a deserted road en route to Crimea in the Henicheskyi region of Kherson Oblast, Ukraine, on Jan. 19, 2022. (Christopher Occhicone/Bloomberg )

About a mile from a border post that marks the last Ukrainian controlled territory before Crimea, soldiers suddenly emerge from the long sea grass to check on an idling car.

Their concern over who comes and goes is no surprise. Should Russia decide to invade Ukraine as feared by the U.S., tanks and infantry would likely pour across this narrow causeway connecting the peninsula to the wide open steppe of southern Ukraine in numbers Europe hasn't seen since 1945.

The strategic loss for Ukraine would be as huge as the prize for Russian President Vladimir Putin. A few miles up the road he could unblock a makeshift dam that has severed Crimea from its agricultural water supply since he annexed it in 2014. Moving east, he could connect the peninsula by land to Russia and those parts of Ukraine's eastern Donbas region already controlled by Russian-armed separatists. By moving west to Odessa and its seaports he could leave the remainder of Ukraine landlocked. A section of the Northern Crimean Canal where it becomes dry, below a makeshift dam in the Kalanchatski region of Kherson Oblast, Ukraine. (Christopher Occhicone/Bloomberg )

Yet a 435-mile drive along the country's southern coast gives a bracing sense of what retaking even this swathe of the former Soviet and Russian Empires - let alone all of Ukraine - would involve. It's the reason so many here believe it won't happen.

First, this seemingly endless expanse of open fields may be near-impossible to defend, but its scale and population of some 8 million people also would make it challenging to hold. Even with 130,000 troops assembled, based on the current U.S. assessment, the risk would be greater than any Putin has taken since assuming power more than 20 years ago.

Then there's the potentially ruinous price of occupying a part of one of Europe's poorest countries at a time when Russia would be under intense international sanctions, dwarfing the cost of any foreign policy foray he has undertaken to date.

Moscow says it has no designs on an invasion, though few if any know Putin's ultimate intentions. Controlling Ukraine - a country almost twice the size of Germany - may be so enticing he is willing to roll the dice. For a leader convinced of Russia's birthright in Kyiv, the move would at a stroke return much of a territory that he himself in 2014 referred to by its imperial-era name, Novorossiya, or New Russia. Ukraine's economy would become dependent on access to Russian held ports for its viability, its hopes for European integration a memory.

Yet the economic failures that Russia's policies have already helped create - visible on the ground in a journey from Mariupol on the Sea of Azov, through impoverished towns and struggling cities to the vibrant port of Odessa - show the Russian president also has far less risky options available.

Russia's troop buildups, cyber attacks and hybrid military incursions could continue to exploit Ukraine's vulnerabilities and roil European financial and energy markets without the hefty bill from swallowing a region hollowed out over the past eight years.

As Svetlana Kondratenko, a 46-year-old clothes trader at the central market in the relatively prosperous port city of Kherson, put in a common refrain: "We aren't living here. We're surviving."

You can hear the impact of Russia's 2014 assaults on Ukraine in the humming of tires as they run over the grooves that passing tank tracks have left in the asphalt. It's a sound common to battle zones, yet the drone continues long after the front line separating the warring sides of the Donbas conflict has been left behind.

That fighting has killed about 14,000 people. It has left more than 1.4 million internally displaced, not including the millions still on the other side of the front line, according to government data. It severed transport links, supply chains and daily commutes. Unemployment remains higher in government-controlled areas of Donbas - long the nation's industrial heartland - than in any other part of the country.

At least 500 of those jobs were lost at Berdyansk Port, about 100 kilometers from the front. It saw volumes plummet tenfold, to 450,000 tonnes of cargo a year from 4.5 million before the war. Half of the port's territory has been requisitioned by the Ukrainian Defense Ministry to build a naval base, aimed at challenging what the government has described as Russia's military takeover of the Sea of Azov. 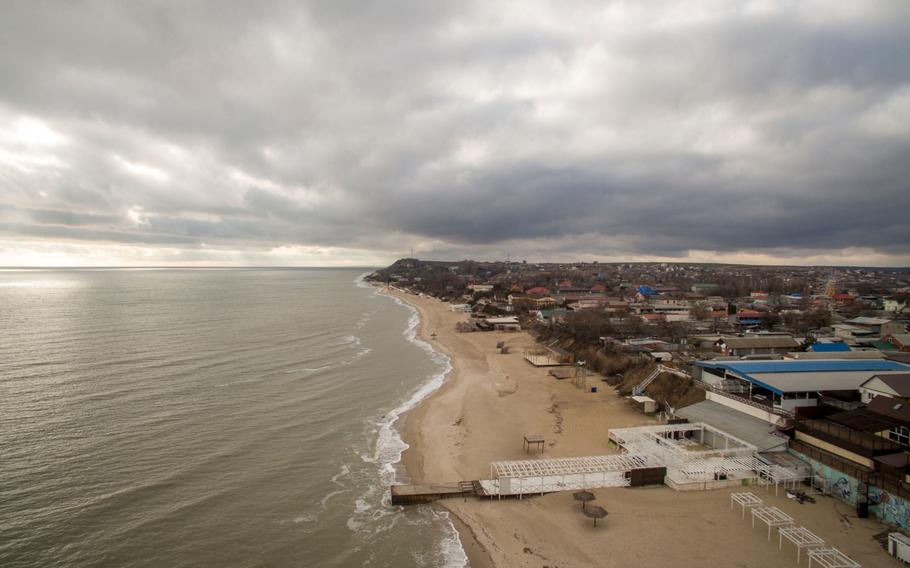 The Sea of Azov shoreline at a beach in Urzuf, Ukraine, on Jan. 18. (Christopher Occhicone/Bloomberg )

Outside the dockyards, tourism has benefitted as Ukrainians unable to visit Crimea have come here instead. The sense of foreboding, though, is omnipresent.

In Urzuf, a resort at the deepest point of the bay stretching between Mariupol and Berdyansk, the Wolfsangel insignia of Ukraine's far-right Azov regiment flutters over a military base. Opposite the incongruous echo from Nazi Germany stands a long row of low, shuttered stores that in summer sell the bucket and spade staples of family beach holidays.

The Azov regiment, formed by volunteers in 2014 but since absorbed into the National Guard, has several bases along this stretch of coast, ready to deploy in case of a Russian assault.

Closer to Crimea, the damage done by years of neglect from Kyiv followed by a sudden halt of tourist traffic after the peninsula's annexation has been brutal.

Maya Shushalova, 53, describes bitterly how the factory that used to process salt from Rose Lake, a coastal pond, closed in 2000. Like virtually everyone else in the adjacent village - constructed for a factory that's now a brick and concrete ruin - she had worked there and was left with nothing.

"Tourists used to still come for some salt, but that's gone now too,'' since 2014, she said. Now an assistant in the village's only store, she declined to talk politics in public, like others angered by the way things turned out.

Down here and in the east, a majority used to vote for former President Viktor Yanukovych and have no love for the so-called Orange and Maidan revolutions that twice either barred or ejected him from office. The governments that followed have done little or nothing to improve their lives. Rising prices and economic stagnation have extinguished even the brief flicker of hope that followed the election of President Volodymyr Zelenskiy, a former comedian who was seen as an outsider to the bottomless corruption of Ukrainian politics.

"It's a very sore subject," said a local trader, who didn't want to be named for fear of retribution in a small community. Asked about the tensions with Russia he said: "Nothing good will come of it, like nothing good came of the revolutions. It might have, but after 30 years it's too late."

Solkovye, a small settlement on the second causeway joining Crimea to the mainland, has been harder hit still. The gasoline station and Kavkaz restaurant have stood abandoned since 2014, as were most of the few houses here.

"There used to be 200 people a day or more would eat at the restaurant," said Nikolay Ilkyv, a 49-year-old shepherd who tends his flock around the crumbling buildings, although his main market in Crimea is gone and sheep prices have stagnated even as feed costs rise. "But then it just stopped - like that."

Ilkyv considers himself Ukrainian and Crimea "Our Motherland." But many along the way from Mariupol to Odessa speak in Russian and are at least ambivalent about where they belong.

In Kherson, Irina Vershinyok, a waitress and former English teacher is among the many whose families Putin has divided. She's ethnically Russian but happy in Ukraine, where her husband spends two months on, one month off driving trucks in Europe for 2,000 euros ($2,230) per month, enough to escape the penury facing many. 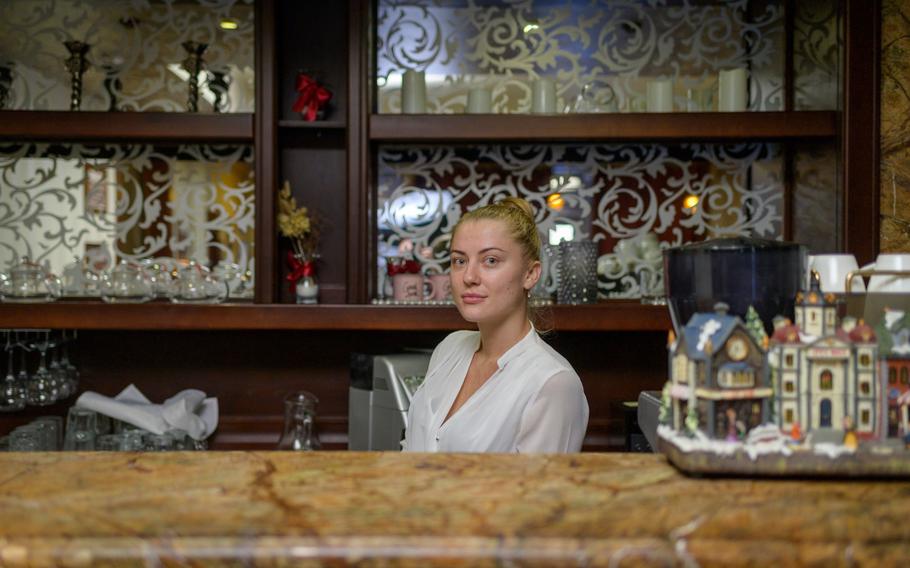 Irina Vershinyok, waitress and former teacher, at a restaurant inside the Bordo Hotel in Kherson, Ukraine, on Jan. 20, 2022. (Christopher Occhicone/Bloomberg ) The historic center of Odessa on Jan. 22. (Christopher Occhicone/Bloomberg )

Vershinyok said the Crimean takeover had been good for her parents. They live in the ancient city of Kerch on the peninsula. Her father has cancer and Russia has better public health insurance, she said. Their pensions almost tripled.

At the same time, Putin has showered Crimea with new roads and transport links to turn it into what she called a "showroom." As a regular visitor to relatives in non-showroom provincial Russia, she said she isn't fooled. But she is skeptical too of Ukraine tightening its relationship with Western Europe, because the country "isn't ready."

It's impossible to put an exact figure on the economic impact that the conflict with the Kremlin has had on the region. One 2020 study of the potential cost should Ukraine retrieve the separated Donbas territories put the reconstruction bill at $21.7 billion.

Should Russia do what Washington fears, a fiercely fought war to seize just the remaining Donbas areas and across from Mariupol to Odessa would likely leave similar damage, adding a potential $62 billion to the Kremlin's bill. That assumes the same per-capita cost and based on a United Nations estimate of the separatist-held area's population at 2.8 million.

Raising salaries and pensions to Russian levels would cost tens of billions of dollars more, so too the subsidies that would be needed for an economy that would be cut off from trade under international sanctions.

Arriving in Odessa, the potential risks and rewards come into full view. It's a city of just over 1 million with traffic jams, neon lights, crowded bars and restaurants - a world apart from the still post-Soviet atmosphere that dominates further east. The historic center is overrun with strip joints, its ports humming with extra business from a commodities boom and the shift in traffic westward.

The city's confidence extends to a belief that Ukraine could stop it falling into Russian hands. "I think we can defend this region, we have enough," said Artem Fylypenko, a 56-year-old security analyst at the National Institute of Strategic Studies, a government think tank, said at a café-cocktail bar in the center.

Even so, with Russian troops now deployed at Ukraine's borders and new additions sent to the Black Sea Fleet, the threat can't be ignored, he said. Odessa is a short hop by sea from Crimea and Russia has made a show of building up and exercising amphibious landing craft in the Black Sea. Transnistria, a pro-Russian enclave of neighboring Moldova with 1,500 Russian and 7,500 well-trained and armed separatist troops, is just a one hour drive north.

More likely, though, is another non-invasive option for Putin: the threat that Transnistria and Odessa's sizeable contingent of pro-Russian citizens could pose in hybrid, or covert attacks short of invasion, according to Fylypenko.

Some Ukrainian rail and road connections run through Transnistria. A river delta region south of the city known as Bessarabia is connected by just two bridges that could be blown up, enabling Russian agents to foment an insurrection. Ports could be sabotaged or made inaccessible to commercial shipping.

"A naval blockade of Odessa's ports would be devastating to Ukraine's economy," said Fylypenko, a reservist whose fighting kit sits at the ready in his apartment. Still, he said, "it's easier for Russia to attack than to control. To take Odessa, they would definitely need more troops."