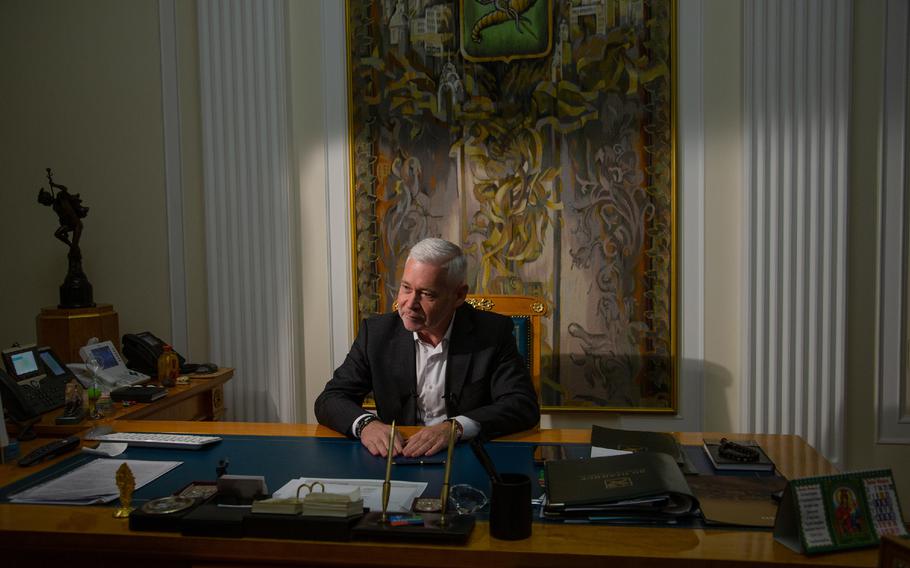 The Mayor of Kharkiv, Ihor Terekhov, sits in his office in Kharkiv, Ukraine, on January 26, 2021. (Serhiy Morgunov/Washington Post)

RUSSIA-UKRAINE BORDER - The helicopter cut through the gray sky, following the path of the razor-wire fence below it. Lt. Col. Uiry Trubachov, of Ukraine’s Border Guard Service, squinted up at the chopper.

“Those are Russians,” he said.

Before Russia’s invasion and annexation of Ukraine’s Crimean Peninsula in 2014, the border barriers didn’t exist. Now, they separate Ukraine’s easternmost cities and towns from the buildup of Russian troops on the other side - and what U.S. officials and allies have warned could be the vanguard of an attack on Ukraine.

At Ukraine’s northeastern border crossing near Kharkiv - the country’s predominantly Russian-speaking, second-most populous city, with about 1.5 million people - the fences are controversial. Some who live right at the edge of the boundary resent the obstruction to Russian territory they used to visit often - to pick mushrooms in the nearby forest or see friends in Belgorod, a Russian city about an hour away from the main land crossing.

The language and identity fault lines that weave through Ukraine are especially pronounced here - a region where pro-Russian separatists once raised their flag. Across many parts of Ukraine, Russia tugs with a sense of common bonds and shared history. But Ukrainians have nonetheless chosen a pro-Western path that carries the powerful momentum of the future.

It’s also what makes Kharkiv a rich study in Ukrainians’ views toward Russia as its president, Vladimir Putin, deepens a showdown with NATO over what Moscow perceives as its sphere of influence, which includes Ukraine.

The Kremlin attempts to exploit the East-West pull in Ukraine with propaganda that accuses the Ukrainian government of oppressing Russian speakers. But many in Kharkiv fiercely objected to Ukrainian President Volodymyr Zelensky’s comments to The Washington Post that the city could be a prime target for Russia.

“Realistically, if Russia decides to enhance their escalation, of course they are going to do this on those territories where historically there are people who used to have family links to Russia,” Zelensky said. “Kharkiv, which is under Ukraine government control, could be occupied.”

Kharkiv may not harbor as much resentment of Russia as other parts of Ukraine. But the pro-Russian sentiments from 2014 that threatened to turn the city into another Moscow-backed separatist territory - similar to the Donetsk and Luhansk enclaves in Ukraine’s eastern Donbas region - no longer have major sway.

“People here love Ukraine because Ukrainians live here,” said Kharkiv’s mayor, Ihor Terekhov. “Yes, we speak Russian. If you ask me if Kharkiv citizens want Ukraine to be friends with Russia, the answer is definitely yes. But do they want war? Definitely not. Do they want for us to be a piece of Russia? Of course not.”

“We will not be giving away the city of Kharkiv to anyone,” Terekhov added. “We will be standing shoulder to shoulder defending Kharkiv.”

As pro-Russian separatists marched through Kharkiv with Russian flags in early April 2014, Gamlet Zinkivskyi had a front-row seat. His apartment balcony at the time looked onto one of downtown Kharkiv’s main streets. He watched with dismay as demonstrators occupied the regional administration building and declared the sovereignty of a so-called “Kharkiv People’s Republic.”

“That was a moment when I started packing my things and thinking where to go,” said Zinkivskyi, a prominent artist and Kharkiv native. “I knew I couldn’t stay here. If Kharkhiv becomes Russian, that’s it, I’m leaving.”

Unlike the separatist movements in the Donbas region - touching off an ongoing conflict that has claimed nearly 14,000 lives since 2014 - the one in Kharkhiv ultimately fizzled. Kyiv’s forces maintained control of the city. It instead welcomed scores of refugees fleeing the fighting in the new self-proclaimed Donetsk and Luhansk republics.

The plight of those people - and seeing what ultimately became of the separatist regions - helped shift attitudes in Kharkiv, Zinkivskyi said. Life in those territories is locked in a political limbo with few job opportunities. Many people end up moving to Moscow at their first opportunity. In the city of Donetsk, which has a population of about 900,000 people, a nighttime curfew is in place four days a week.

“Some people used to believe that Donetsk will turn into Donetsk City, with skyscrapers, and New Yorkers dreaming of moving to the Donbas,” Zinkivskyi said. “That didn’t happen, to put it mildly.”

“And those people realized that, hey, they didn’t want the same thing happening in Kharkiv,” he added.

About a 30-minute drive from downtown Kharkiv is what looks like a row of storage containers. It is actually a camp for people who fled the separatist territories. Each block has small apartments - smaller than most college dorm rooms - with shared kitchens and bathrooms.

Liudmilya Makarova has been living here with her daughter, who has Down syndrome, and her son since 2015, about a year after they fled the self-proclaimed Luhansk separatist republic. The kids sleep on bunk beds. Makarova is on a couch that doesn’t have room to unfold into a bed. Colorful drawings line the wall, giving the space a cozy feel despite the cramped quarters. But it was never supposed to feel like home.

“I had no idea it would last so long, with no end of it in sight,” Makarova said.

Her last memories of her home in Luhansk were hiding in the cellar with her children as intense fighting broke out between the rebels and government forces, including airstrikes. She was too afraid to leave the space to cook for them.

“I couldn’t keep watching my children cry,” she said. “I’m recalling that and I’m starting to shake.”

Talk of a fresh attack from Russia is a trigger for some of the camp’s residents, who already fled war once. Makarova said she keeps away from the news. One of her neighbors, Marina Kirbaba, follows it more closely.

“We’ve been through this before,” Kirbaba said. “I don’t think that - well, then again, who knows what Putin has in his head. I don’t know why he would attack? Why?”

What used to be an empty field surrounded by thick forest is now split by trenches Ukraine has never had to use. The military built them, with wooden-planked walls, at the eastern edge of the Kharkiv region in 2015 as the separatist conflict in Donbas flared.

Just beside the trenches is an observation tower with cameras that monitor activity near this border around-the-clock.

If the Russians choose to invade Kharkiv, this won’t stop them, said Trubachov, of Ukraine’s Border Guard Service. But it might slow them down enough for Ukraine to call in reinforcements.

“The situation is stable and under control,” Trubachov said. “Directly near the line of state control, we do not observe the movement or gathering of Russian troops - I mean, the territory that we can control by observing.”

When the fencing was installed seven years ago, it quite literally walled off a small border village of about 100 retirees. Now a line of trenches runs behind their farm plots, followed by the fence. Getting in or out of the village means passing through a border guard security checkpoint.

Ukrainians are able to enter Russia at the nearby land border crossing. But people from the village complain that it’s a long walk for them to get to the checkpoint and that the crossing process is challenging. It used to be just a 10-minute walk behind their yards.

One woman started crying because she said she’s been unable to visit her son’s grave, which is in Russia. He died during the Soviet Union’s war in Afghanistan during the 1980s. Another lamented that she could buy groceries cheaper across the border in Russia.

“We are not feeling any aggression toward Russians. We are Russians, too,” said 77-year-old Mikhail Fokiev. “Moreover, we have plenty of relatives there.”

But asked what he would do if the Russian military crossed into this region, Fokiev said he would go west, further into Ukraine.

“What else is there to do?” he asked.