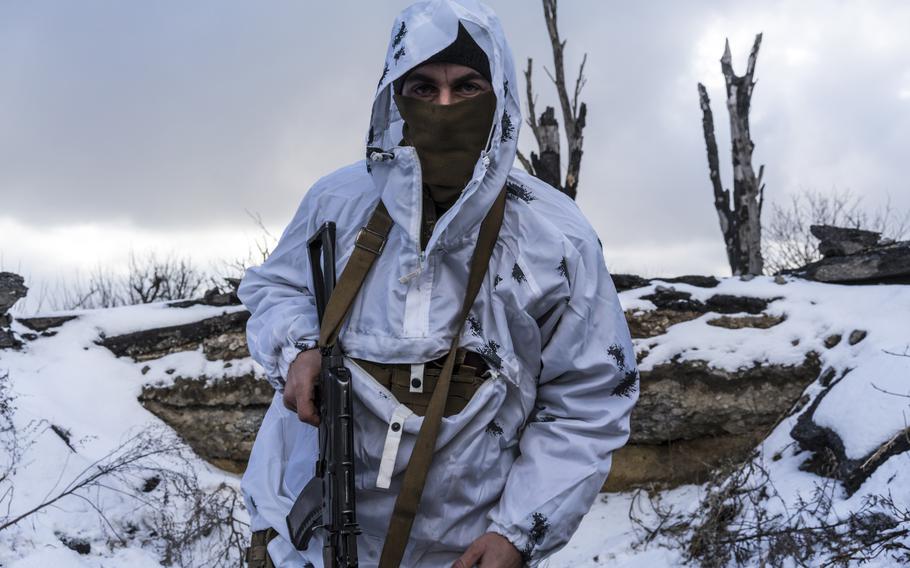 Anatoliy, a Ukrainian soldier with the 56th Brigade, in a trench on the front line on Jan. 18, 2022 in Pisky, Ukraine. Negotiations this week between Russia and the U.S. over the prospect of a Russian invasion of Ukraine ended inconclusively. (Brendan Hoffman/Getty Images/TNS)

(Tribune News Service) — The U.K. is advising against nonessential travel to Ukraine, the Foreign Office announced, and British nationals in the country were advised to register their presence.

The move puts the U.K. in line with other nations in the Five Eyes intelligence alliance, including Australia, Canada and the U.S.

"The situation in Kyiv and other areas outside Donetsk and Luhansk is generally calm. However, events in Ukraine are fast moving. There is continuing uncertainty about Russian intentions," the Foreign Office said in Saturday's advisory.

The agency previously advised against all travel to Donetsk oblast, Luhansk oblast and Crimea.

Bloomberg News reported Friday that the Biden administration is weighing whether to evacuate family members of diplomats stationed in Ukraine, and that officials at the U.K. foreign office have been told to be ready to move into "crisis mode" at very short notice.

The U.S. and the U.K. ramped up their warnings over a potential invasion as Russia has amassed more than 100,000 Russian troops near Ukraine's borders even as talks with the Kremlin continue. Moscow has shown no signs of de-escalation. The Kremlin has repeatedly denied it intends to invade Ukraine.

Ukraine and Russia have been in conflict since Russian President Vladimir Putin responded to the 2014 Ukrainian revolution that ousted the pro-Moscow president by seizing Crimea. Russia also backed separatists in eastern Ukraine by sending personnel and weapons, helping stoke a conflict that has killed more than 14,000 people.