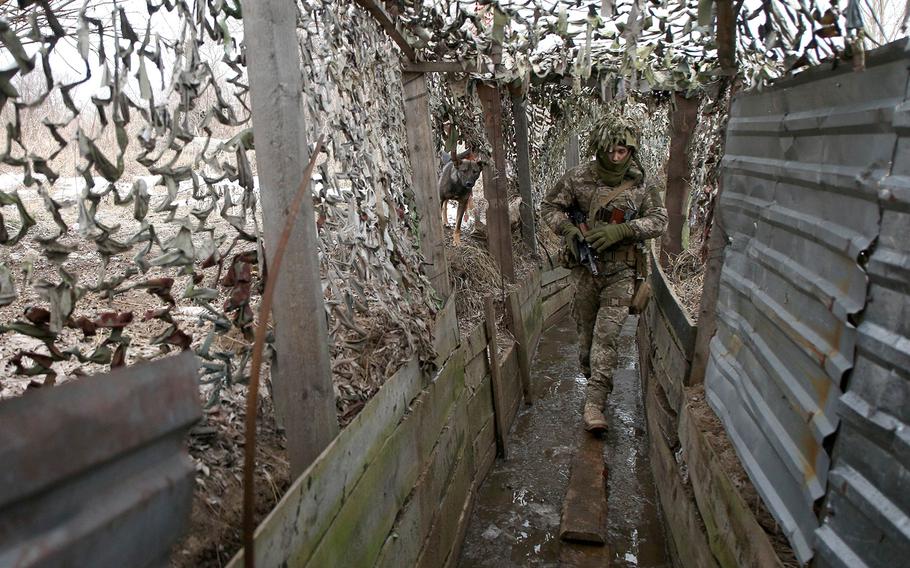 A Ukrainian Military Forces serviceman, walks in a trench on the frontline with Russia-backed separatists near to Avdiivka, Donetsk, southeastern Ukraine, on Jan. 9, 2022. (Anatolii Stepanov, AFP via Getty Images/TNS)

The conflict playing out between Russia and Ukraine is one marked by land borders and shaped by strategic influence. Moscow sees Ukraine as an important buffer to the North Atlantic Treaty Organization, or NATO. Ukraine sees Russia as an aggressor that has already occupied parts of Ukrainian territory.

Here are maps that help explain the deep roots of the conflict and where things stand right now.

How are Russia and Ukraine linked historically?

The historical links date as far back as the 9th century, when a group of people called the Rus moved their capital to Kyiv - a legacy President Vladimir Putin has often invoked when arguing that Ukraine is bound to Russia.

Ukraine was part of the Soviet Union until it declared independence in August 1991.

It served as a strategic part of the Soviet Union, with a large agricultural industry and important ports on the Black Sea.

The countries’ historical connection is still rhetorically present in these tensions. “I am confident that true sovereignty of Ukraine is possible only in partnership with Russia,” Putin wrote in July. “Together we have always been and will be many times stronger and more successful. For we are one people.”

Why does Putin care if Ukraine joins NATO?

NATO was founded in 1949 to protect against Soviet aggression. The alliance has since expanded to 30 countries, including the former Soviet republics of Lithuania, Estonia and Latvia. The treaty states that if one nation is invaded or attacked by a third party, all nations in NATO will collectively mobilize in its defense.

The Kremlin is demanding guarantees from NATO that Ukraine and Georgia — another former Soviet Republic that Russia briefly invaded in 2008 — would not join the alliance. The Biden administration and NATO allies say Putin can’t deny Ukraine that right, but nothing is in the works to grant the country membership anytime soon.

Either country’s admission into the alliance would increase NATO’s footprint along Russia’s borders.

What parts of Ukraine does Russia currently control?

In 2014, Russian military forces annexed Crimea on the Black Sea. Moscow-backed separatists also took control of the eastern industrial regions of Donetsk and Luhansk, which are on Russia’s border. The ongoing conflict in eastern Ukraine has claimed some 14,000 lives.

According to a 2001 census, more than 50 percent of the population in Crimea and Donetsk identified Russian as their native language. (Ukraine has not conducted a more recent census.) Putin claims he’s defending the rights of Russian-speakers in those areas.

Are there Russian-linked separatist regions in other countries?

Yes. These so-called “frozen conflicts” have been around since after the Soviet Union fell in 1991. They exist in the former Soviet republics of Azerbaijan, Moldova and Georgia and are widely seen as part of the Kremlin’s larger strategy to extend influence and evade sanctions.

For example, a 2018 Washington Post investigation found that in separatist-controlled eastern Ukraine, officials transfer money to the Russian-supported breakaway region of South Ossetia in Georgia, where the funds are then wired to Russia. Russia then uses the money to pay for goods that are shipped directly to eastern Ukraine.

In Transnistria, pro-Russian separatists broke away from Moldova in 1991, saying they identified more with Ukraine and Russia than with the newly formed Moldova republic that was more linked to Romania.

Nagorno-Karabakh, an ethnic Armenian enclave within the internationally recognized borders of Azerbaijan, became a disputed region after the fall of the Soviet Union and the independence of both countries. In September 2020, thousands of troops were killed and entire villages were displaced in a bloody conflict that lasted for six weeks. The eventual peace deal was brokered by Putin, showing how Russia has become a key power broker in a conflict that dates back to the Soviet era. Russian peacekeepers now patrol the enclave.

Abkhazia and South Ossetia have effectively broken away from Georgia with Russian help, both declaring independence in the early 1990s and remaining strategically linked to the Kremlin.

The Washington Post’s Hannah Dormido contributed to this report.