What's next for Prince Andrew, cast out into the royal wilderness? 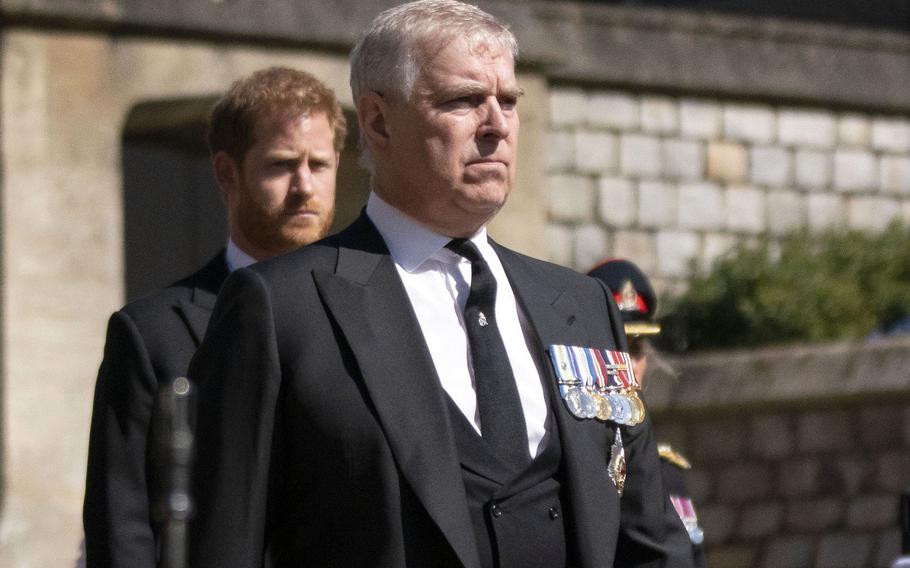 Prince Andrew, foreground, walks in the procession ahead of Britain Prince Philip’s funeral at Windsor Castle, Windsor, England, on April 17, 2021. U.S. District Judge Lewis A. Kaplan gave the green light Wednesday, Jan. 12, 2022 to a lawsuit against Prince Andrew by Virginia Giuffre, who says he sexually abused her when she was 17. (Victoria Jones/Pool via AP)

LONDON — Stripped of his scarlet tunics and white plumes, his military titles and honorary patronages, and cast aside by his lifelong protector - his mother, his queen - Britain's Prince Andrew now finds himself in the royal wilderness, and courtiers say there is no way back.

His friendships with Jeffrey Epstein and Ghislaine Maxwell, both convicted for sexually exploiting teenage girls, have created the biggest crisis for the House of Windsor since the death of Princess Diana. The royal family has stood by Andrew for more than a decade since the first scandalous headlines, while the prince repeatedly denied all accusations. But after a judge in New York ruled this past week that a sexual abuse lawsuit against him can move forward, the palace made clear that he will fight this alone, "as a private citizen."

He will remain a prince, yes - ninth in line to the throne. He's still Duke of York, for now. But without the pomp and circumstance, without the military finery he has swaddled himself in. Speeches, ribbon cuttings, parades, trade missions abroad and applause? Officially gone, alongside use of the honorific "His Royal Highness."

This is a big year for the British royal family, as Queen Elizabeth II prepares to celebrate an unprecedented 70 years on the throne, her Platinum Jubilee. But Andrew almost certainly won't ride alongside his mother's golden carriage or wave to the adoring crowds from a balcony. As Buckingham Palace pronounced on Thursday, with the queen's approval, "The Duke of York will continue not to undertake any public duties."

While Prince Harry and Meghan were freed of constraints on making outside money when they lost their royal titles, Andrew's fall doesn't leave him with much leverage for that.

Palace watchers envision a kind of 21st century banishment, an "internal exile" for the 61-year-old duke.

He may be allowed to remain at Royal Lodge, where he lives with his ex-wife, Sarah Ferguson. With 30 rooms, including seven bedrooms, it's hardly a bad place to have to hole up. Even as he lay low there the past couple years, he would continue to drive his $100,000 Range Rover hybrid over to Windsor Castle, just three miles away, to ride horses on the grounds or have lunch with his mum.

But Dickie Arbiter, the queen's former private secretary, said he wouldn't expect Andrew return to any public role. Even if the prince were to win the lawsuit, too much damage has been done.

"As I see it, there's no way back for him as an active member of the royal family," he said. "There aren't many options left for him."

Arbiter added that Prince Charles, the heir to the throne, and his son Prince William would have been involved in the decision to strip Andrew of his titles and patronages.

Arbiter speculated that Andrew may soon sell his ski chalet in the Swiss Alps to help fund mounting legal costs. "I can't see the queen digging her hand into her pocket" on this, he said.

As far as the lawsuit, legal experts contend that Andrew may have no real choice but to settle the civil case brought against him by Virginia Giuffre, one of Epstein's victims, who says she was trafficked to Andrew on three occasions, starting when she was 17.

Going on trial, in the media hothouse of New York City, the experts say, would be too perilous.

"The only way Andrew stops contagion to the royal family, which has already started, is by settling," said Mark Stephens, a prominent media lawyer. "He has to throw himself on the judicial hand grenade that was thrown into the middle of the royal family in order to protect the wider royal family."

Amber Melville-Brown, a crisis manager and a partner at Withers law firm in New York and London, said she could see Andrew deciding either way - to settle or go forward with the suit. "With so much lost, Prince Andrew may consider he has nothing to lose but to proceed to trial," to seek total vindication, she said. Or he "may want to do all in his power to cause no further damage to himself, and not further to tarnish the name of the royal family."

Nick Goldstone, a legal commentator and head of dispute resolution at Ince law firm in London, noted that while English law relies primarily on written witness statements, U.S. courts tend to involve videotaped depositions. If the lawsuit proceeded toward a fall court date, Andrew could soon find himself being pressed by lawyers, under oath, about the most intimate details of his private life. "A grueling experience that I do not think Andrew would want to experience," Goldstone said.

Andrew has claimed he does not recall ever meeting Giuffre. He suggested to the BBC that a 2001 photograph - showing him with his arm around Giuffre's exposed midriff, while Maxwell grins in the background - might be a fake. He said he couldn't have met Giuffre at Maxwell's London townhouse that night, because he took his daughter to a Pizza Express in a suburb that evening. And he said it's impossible that he was the one, as Giuffre claims, who sweated all over her on a nightclub dance floor, since an incident when he was a helicopter pilot in the Falklands War prevented his ability to sweat.

"They'll ask about the pizza party," Goldstone said. "They'll seek evidence from his daughter. They'll ask for evidence that he doesn't sweat."

Fair game, too, would be questions about how the prince came to earn the nickname "Randy Andy," what his mother the queen advised, and friendships with Epstein and Maxwell.

Giuffre's lawyers on Friday told the court they wanted to take testimony from Andrew's former assistant, Robert Olney, as well as a woman who allegedly saw prince in the nightclub.

If the case proceeds, the duke's lawyers could also seek testimony to undercut Giuffre's claims or to cast her in a harsh light. Such a strategy has its own risks.

Legal experts say Andrew could still try to get the lawsuit thrown out, based on arguments other than what the judge rejected this past week. The prince could also decide to effectively ignore the suit, in which case there could be a "default judgment" against him, with damages awarded by the judge.

Nigel Cawthorne, author of "Prince Andrew: Epstein, Maxwell and the Palace," said Andrew could attempt to use the queen's jubilee as justification for settling. "He could say, 'We will settle this, because it's overshadowing my mother's jubilee.' He has the perfect excuse. But the British public will ask, 'Where does the 5 million pound [settlement] come from? Is it out of your pocket?' "

Giuffre's attorney, David Boies, told the BBC this past week that the case is not about the money.

"I think it's very important to Virginia Giuffre that this matter be resolved in a way that vindicates her and vindicates the other victims," he said.

In a 2009 settlement, unsealed this month, Giuffre was awarded $500,000 from Epstein, but he did not admit any guilt.

Legal experts suspect she would demand some kind of apology from Andrew.

"A purely financial settlement is not anything I think she is interested in," her lawyer said.

On Twitter on Thursday, Giuffre thanked her "extraordinary" legal team, writing, "their determination helps me seek justice from those who hurt me and so many others."

She continued: "My goal has always been to show that the rich and powerful are not above the law &amp; must be held accountable. I do not walk this path alone, but alongside countless other survivors of sexual abuse &amp; trafficking."

Cawthorne suggested that Andrew had a blinkered view of the world, which perhaps helps explain some of the prince's past remarks, such as when he described Epstein's behavior as, simply, "unbecoming." Epstein was a convicted sex offender, who before he died by suicide in 2019 faced additional charges for trafficking dozens of girls and engaging in sex acts with them.

Cawthorne said, "If you are born behind palace gates, and by the time you can walk and talk and everyone is bowing and scraping and calling you 'your royal highness,' than you must get a rather distorted view of the world, and you can assume you can get away with anything, and that no one will ever tell you not to."

Andrew was stripped of his titles after more than 150 British veterans wrote to the queen, calling her son an embarrassment. Alexander Wardrop, 72, was one of the veterans who signed the letter.

"It's simple, it's about honor," said the retired army officer. "There was always one maxim for the British army, that is honor is the most important thing. To act honorably. If under suspicion, you stand up and be accounted, or resign. I don't approve of anecdotal evidence or trial by the press or people who don't have evidence. But when it becomes obvious that something isn't quite right, then you don't run away from it."

The Washington Post's Shayna Jacobs in New York contributed to this report.