by
Robyn Dixon and Ellen Nakashima
• The Washington Post • January 14, 2022 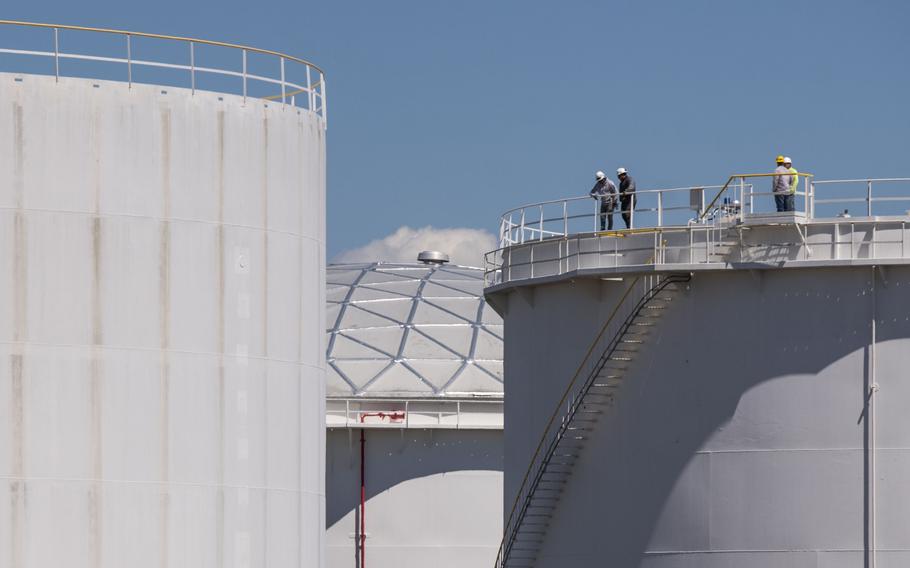 Workers stand on top of a tank at a Colonial Pipeline Inc. facility in Avenel, N.J., on May 12, 2021. Former REvil associates also are believed to be responsible for the May cyberattack on Colonial Pipeline that led to gas shortages on the U.S. East Coast. (Mark Kauzlarich/Bloomberg)

Russia’s domestic security agency on Friday arrested 14 alleged members of the REvil ransomware gang and announced that it had eliminated the group at the request of Washington.

The move is welcome, but analysts said it seems aimed to send a signal that such cooperation would cease if the United States and Western allies impose sanctions in the event of a Russian invasion of Ukraine.

“The timing here is not an accident,” said Dmitri Alperovitch, chairman of the Silverado Policy Accelerator think tank.

The Russia-based REvil gang has carried out numerous attacks on major global companies, including the July attack on software provider Kaseya and the May attack on the world’s biggest meat-processing business, JBS. Former REvil associates also are believed to be responsible for the May cyberattack on Colonial Pipeline that led to gas shortages on the U.S. East Coast.

The arrests marked a rare positive moment in U.S.-Russia relations after a flurry of diplomatic efforts in Europe this past week failed to deter Russia’s military buildup near Ukraine and persuade Moscow to deescalate.

President Joe Biden asked for President Vladimir Putin’s cooperation to fight cyberattacks and ransomware when the two met in Geneva in June, but Friday’s arrests are Russia’s first major operation to halt Russia-based ransomware attacks around the globe.

Since the June summit, senior U.S. and Russian officials in an “experts group” have held at least a half-dozen calls in which the Americans have sought Moscow’s cooperation on cybercrime. The individuals arrested were discussed on those calls, with the United States passing information about them to the Russians so they could act, said a person familiar with the matter who spoke on the condition of anonymity because of the matter’s sensitivity. “This is really a credit to Biden’s approach,” the person said.

“This is a significant action by Russian law enforcement against one of the most prominent ransomware gangs in the world,” Alperovitch said. “It also serves as a signal — amidst potential significant deterioration of relations over Ukrainian conflict — to showcase the type of meaningful help Russia can provide to the U.S. if it chooses to — or not.

“Putin has already warned Biden that in the event of severe sanctions over invasion of Ukraine, there could be a full break in diplomatic relations, meaning that cooperation like today’s action on ransomware, among other things, would cease,” Alperovitch added.

“The FSB of Russia established the full composition of the REvil criminal community and the involvement of its members in the illegal circulation of means of payment, and documented illegal activities,” an FSB statement said.

Russian television showed FSB agents clad in black bursting into apartments, wrestling suspects to the ground and handcuffing them behind their backs, and searching apartments and computers. One suspect had dozens of thick bundles of ruble bills in a compartment under his bed, according to the video.

The hacker shown was involved in the Colonial Pipeline incident, according to one U.S. official. Although that attack was claimed by a different Russian-speaking hacker group, DarkSide, it is not uncommon for hackers to work for more than one group, and it is quite possible that the hacker shown worked for both REvil and DarkSide, analysts said.

It is likely that the leader of DarkSide started off by working as an affiliate for REvil, said Allan Liska, intelligence analyst at the cyber firm Recorded Future. There is also a good deal of overlap between the malware DarkSide and REvil use to lock up victims’ computers, he said.

A Justice Department complaint filed last month in the Northern District of Texas named Aleksander Sikerin of St. Petersburg as a member of REvil. According to the complaint, U.S. law enforcement seized $2.3 million of cryptocurrency in August tied to ransomware attacks that U.S. officials say Sikerin carried out.

The FSB arrests of alleged REvil gang members sent a message of the benefits of cooperation with Russia, while at the same time underscoring the potential costs to the United States if relations worsen.

Diplomatic efforts to ease the crisis over Ukraine appeared to founder Thursday. Russian officials said there was no point in continuing security talks after U.S. and NATO officials ruled out Russia’s key demand that Ukraine, Georgia and other nations, including Sweden and Finland, be barred from ever joining NATO.

Russian officials have threatened to cut all ties with Washington if the Biden administration carries out its threat to impose sweeping sanctions on Russia should it launch a new attack on Ukraine.

Viktor Zhora, deputy head of Ukraine’s state agency of special communication and information protection, said that “close to 70” federal and local government websites were attacked, many of which were swiftly restored.