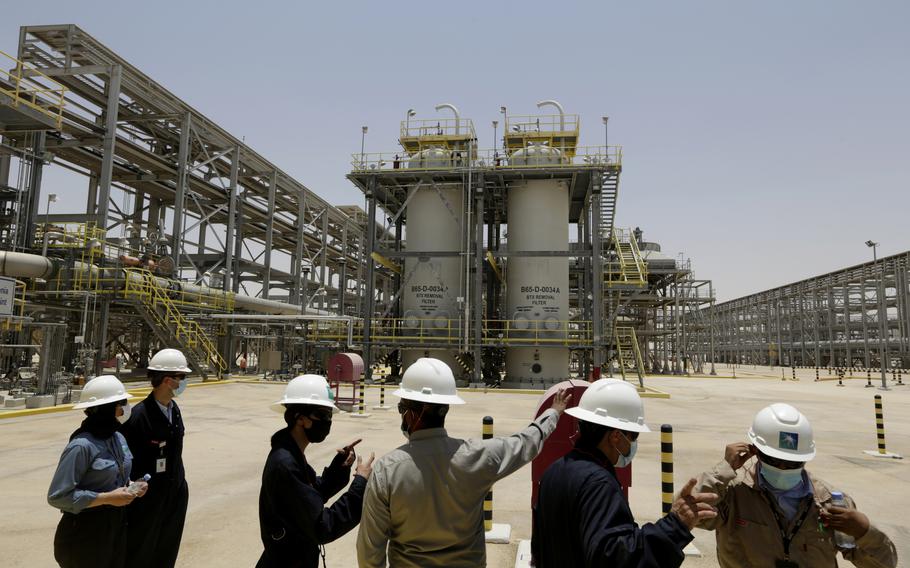 Saudi Aramco engineers and journalists look at the Hawiyah Natural Gas Liquids Recovery Plant in Hawiyah, in the Eastern Province of Saudi Arabia, on June 28, 2021. One of the world's largest oil producers, Saudi Arabia, announced on Saturday, Oct. 23, 2021, it aims to reach “net zero” greenhouse gas emissions by 2060. (Amr Nabil/AP)

Saudi Aramco’s agreement to supply almost half of Poland’s oil will give the world’s biggest crude exporter a stronger foothold in a region that Russian producers have long dominated.

Aramco, the world’s largest oil company, will buy 30% of a refinery on the Baltic coast, as well as a wholesale fuel unit. It also signed a long-term delivery deal with Polish refiner PKN Orlen.

The Saudi-government-owned oil giant will be ramping up oil sales in Russia’s energy backyard just as the two nations, who are joint leaders of the OPEC+ producer alliance, work to wind down nearly two years of production cuts they implemented with the onset of the pandemic.

The deal could have implications beyond Poland, as Orlen may use the crude in refineries in Lithuania and the Czech Republic. Many Eastern European plants were designed to run on Russia’s Urals grade and some may require technical adjustment to use different barrels. Crude from Saudi Arabia and Iraq regularly competes with Russian barrels for customers.

Aramco’s purchase will “expand the company’s presence in Europe’s refining system with a stake in a recently upgraded refinery,” Bloomberg Intelligence analysts Salih Yilmaz and Rob Barnett wrote in a research note. It will also help Aramco “strengthen its position in a region traditionally dominated by Russian crude.”

The 23-member OPEC+ alliance has curtailed output since 2020 to support oil markets after the pandemic forced governments to shut economies, throttling demand. Now, with economies recovering and oil trading above $80 a barrel, the group is gradually rolling back those cuts and bringing more oil back to market.

Competition for customers remains keen among the world’s top producers, even as they work together to control supply. Russia exports oil by pipeline to Asia, where it competes with Saudi barrels in Aramco’s biggest market.

European sales make up a small part of the daily flotilla of crude leaving Saudi Arabia for global markets. Shipments to China alone make up roughly a fourth of the kingdom’s nearly 7 million barrels of daily crude sales, according to data compiled by Blooomberg.

In comparison, the Saudis will be selling at most 337,000 barrels of crude a day to Poland, according to a statement from Orlen. That’s up from previous contracts that allowed for purchases of about 100,000 barrels daily of Saudi oil by Orlen. The new agreement will cover nearly half of the country’s crude needs, according to Orlen Chief Executive Officer Daniel Obajtek.

The Organization of Petroleum Exporting Countries, in which Saudi Arabia is the biggest producer, has said it will continue cooperating with the alliance’s other petrostates, led by Russia, even after the current round of cuts ends. The group has also said it may not roll back all the output cuts this year if demand worsens.

With Saudi production edging above 10 million barrels a day last month, the first time since April 2020, competition for buyers everywhere is likely to intensify. While OPEC+ members are set to increase output next month in accordance with the group’s plans, Russia’s output is capped due to lack of spare capacity and any future growth will be mostly supported by additional drilling.

The last time Saudi production was as high as it is now, Saudi Arabia and Russia were locked in a brief price war, when both countries ramped up output after prior OPEC+ cooperation fell apart.