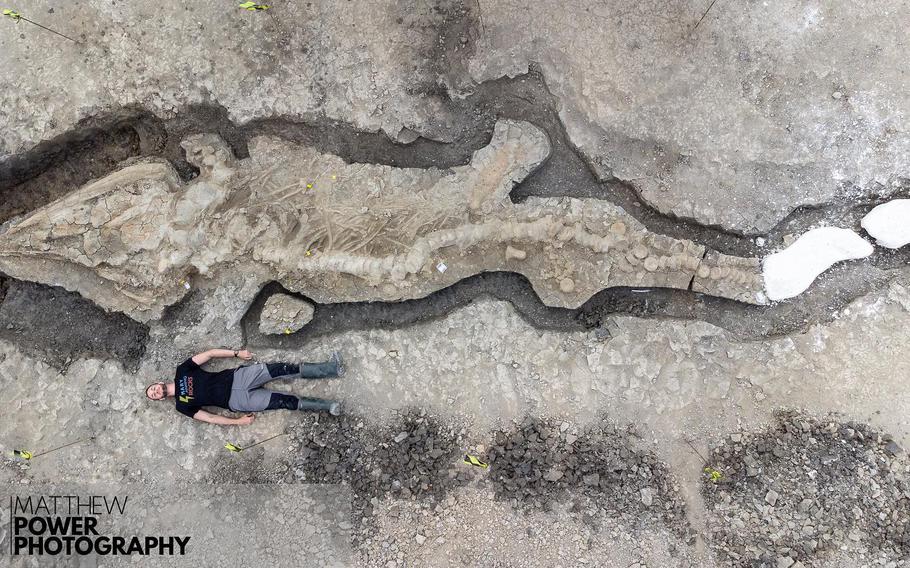 At around 32 feet with a skull weighing more than 2,000 pounds, the fossilized marine reptile is the largest and most intact prehistoric specimen ever found in the United Kingdom. (Matthew Power Photography/Facebook)

U.K. scientists have unearthed the remains of a monumental, 180-million-year-old ichthyosaur, known as a “sea dragon” — a discovery paleontologists are calling one of the country’s finest fossil finds.

At around 32 feet with a skull weighing more than 2,000 pounds, the fossilized marine reptile is the largest and most intact prehistoric specimen ever found in the United Kingdom.

English paleontologist Mary Anning discovered ichthyosaurs in the 19th century. They are known for their large eyes and teeth, reminiscent of mythical sea dragons.

But they are no legend, as Joe Davis of the Leicestershire and Rutland Wildlife Trust learned for himself, when he spotted what appeared to be rows of large vertebrae protruding from the ground after the routine draining of a reservoir last February. Davis covered the site with tarp and called the local council to report a possible dinosaur sighting, he told the BBC.

A team of British paleontologists with a hunch that Davis had located an ichthyosaur visited the site on a cold day soon after. Over the next few months, they worked out the excavation logistics — including how to navigate the coronavirus and avoid disturbing the reserve’s wildlife.

The team eventually returned in August, when they were least likely to disturb the reserve’s migratory birds, for a two-month excavation.

A few ichthyosaur fossils had previously been found in the same reserve, Larkin said. But it soon became clear that this fossil finding — nearly intact from head to tail — was of far greater significance.

The team cleaned the skeleton in a painstaking process and took digital 3D photos, so that its initial form would be preserved, Larkin wrote. Next, they dug trenches and created plaster jackets with splints to safely lift the ichthyosaur’s heavy but delicate pieces out of the ground.

Along the way, the paleontologists collected and documented other fossils to learn more about the reptile’s surroundings. Based on how it had decayed, the team suspected that the specimen had been scavenged, perhaps by other ichthyosaurs, Larkin wrote.