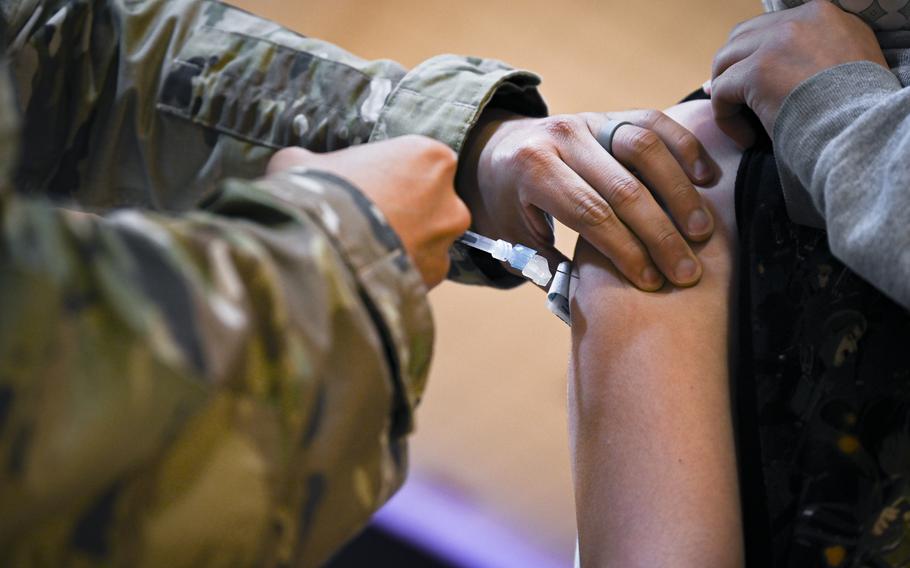 A European rise in new COVID-19 infections that led to temporary closures at Defense Department schools in two countries this week is coinciding with additional military-sponsored vaccination drives, a few of which geared toward eligible students.

In Spain, the Navy hospital at Rota is making coronavirus vaccines, including boosters, available on a walk-in basis starting Monday. The regular Moderna and Pfizer shots as well as the Pfizer pediatric vaccine are available, according to the hospital’s Facebook page.

Children ages 12 to 15 are now cleared to get a booster, on the heels of new Centers for Disease Control and Prevention authorization announced this week.

The U.S. Army Health Center at Vicenza, Italy, said it has appointments open next week for booster shots of the Pfizer vaccine for people 12 and up, the pediatric booster for ages 5 to 11, and the Moderna booster for people 18 and older.

The Navy hospital in Naples has Moderna booster clinics on Friday, Monday, Tuesday and Wednesday for ages 18 and up.

So far, the school closures are limited to Italy and Spain, though cases have been reported at other Defense Department schools in Europe, education officials said.

In Italy, Vicenza High School canceled in-person instruction Thursday and Friday, while the middle school and two kindergarten classes and a second grade classroom at the elementary school closed for the rest of the week starting Wednesday, said Stephen Smith, a spokesman for the Department of Defense Education Activity-Europe.

In Naples, the combined middle school and high school had no classes Friday, and in Spain, Sevilla Elementary School also canceled instruction Friday.

Public health experts recommended that no in-person classes be held until contact tracing could be completed, Smith said Friday. Since classes resumed Monday, no cases have been tied to in-school transmission.

An exception to the general absence of base vaccination drives open to children is Landstuhl Regional Medical Center in Germany. It is offering Pfizer booster shots to eligible people 12 and older on Tuesday, from 8 a.m. to noon.

As of early Friday afternoon, appointments were still available at: https://informatics-stage.health.mil/covax/.

The disruption to classroom instruction comes as the more transmissible omicron variant of the coronavirus brings Europe a new spike in infections. On Wednesday, the European Union reported 1.02 million new cases of COVID-19, a record single-day rise.

Last week, 793 new infections were reported in the city and county of Kaiserslautern, home to a U.S. military community of about 50,000 people.

According to weekly case numbers posted by the Kaiserslautern health district, the tally of new infections reported by U.S. forces in the community skyrocketed, from just four on Dec. 18 to 29 on Dec. 31.

In response, some bases are creating more opportunities for members of military communities to get an injection.

Ramstein Air Base in Germany plans to offer 2,500 more appointments for vaccines and booster shots in the next couple of weeks, Lt. Col. Will Powell, a spokesman for the 86th Airlift Wing, said Thursday. The 86th Medical Group provided 3,000 booster shots in December, he said.

The Army, meanwhile, has administered about 32,000 booster shots across its bases in Europe, “and that number should go up significantly … as we resume vaccinations after the holidays,” said Gino Mattorano, a spokesman for Regional Health Command Europe.

The U.S. military in Europe has not disclosed case numbers since the start of the pandemic, citing operational security.

Some infections are attributed to the omicron variant, but the earlier delta variant is still of concern and in circulation, Powell said in a statement Thursday.