Firefighters extinguish a blaze at a crash site on Autobahn 3 near Parsberg, Germany, on Dec. 20, 2021. The crash killed the driver of a commercial semitrailer, and U.S. personnel are under investigation in the case. (Gottschalk/Fire Department Neumarkt (Oberpfalz))

A truck driver was killed in the flaming wreckage Dec. 20 after he ran into one of four Army vehicles that had gotten separated from a convoy and were parked in the emergency lane of Autobahn 3 near Parsberg.

The vehicles were from the 1st Armored Brigade Combat Team, 1st infantry Division and were traveling from Hohenfels to Grafenwoehr. The Associated Press reported at the time that three Army vehicles were damaged in the crash but no U.S personnel were injured.

On Tuesday, Klaus Meier, chief of the Bavarian highway patrol in Parsberg, confirmed a report in regional newspaper Mittelbayerische Zeitung that American troops involved in the crash are subjects of the investigation. Firefighters work at the scene of a crash between a civilian semitrailer and parked U.S. military vehicles on Autobahn 3 near Parsberg, Germany, on Dec. 20, 2021. Two U.S. soldiers are under investigation for their involvement in events leading to the fatal crash. (Gottschalk/Fire Department Neumarkt (Oberpfalz)) 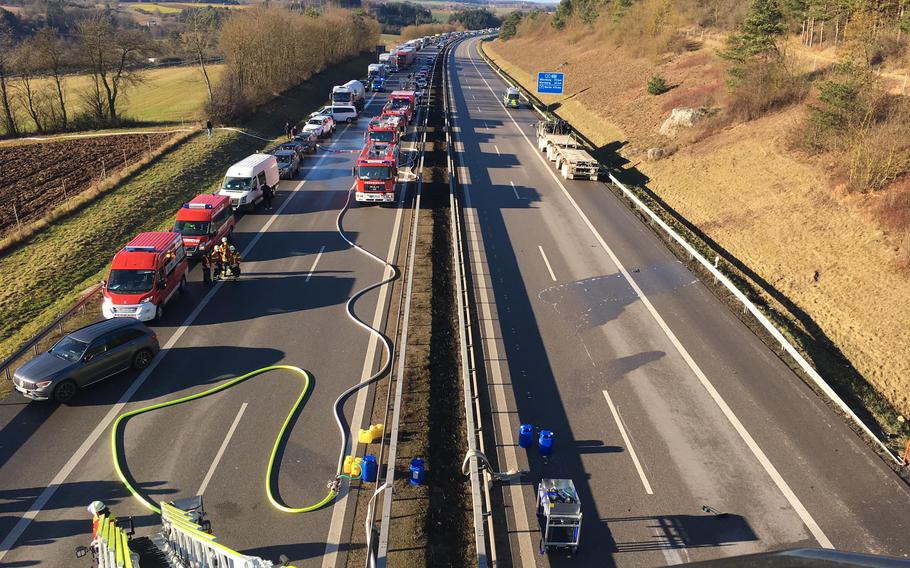 First responders stopped four lanes of traffic on Autobahn 3 near Parsberg, Germany, on Dec. 20, 2021. A truck hit a U.S. military vehicle parked in the emergency lane, sparking a fire in which the truck driver was killed. (Gottschalk/Fire Department Neumarkt (Oberpfalz))

“There are some indications that parts of the last vehicle might have been in the highway lane,” Meier said.

He added that because of “contradictory statements,” investigators are unsure whether that was the case and are asking possible witnesses to come forward.

He said police are also asking Americans who might have driven past the convoy to report what they saw. The crash happened around 9:14 a.m.

“For us, it is a central question. Were parts of the last vehicle in the highway lane or not?” Meier said.

In addition, Meier said, investigators are looking into whether exceptions granted by the SOFA in regard to emergency lane usage apply in this case.

Under German law, a person convicted of negligent homicide can face up to five years in prison.

“The circumstances leading up the collision are still under investigation, and it would be inappropriate to speculate fault at this time,” said Lt. Caroline Pirchner, a spokeswoman for U.S. Army Europe Africa.